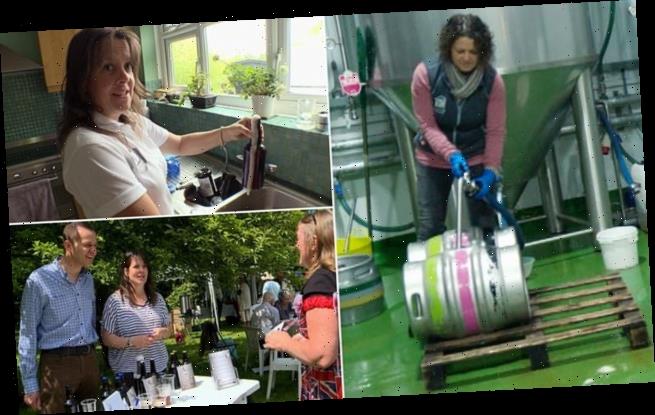 A couple who used to feel trapped in the rat race have revealed they’re finally content with their lives after moving to the countryside to run a brewery, despite still working long hours.

Last night’s Ben Fogle: Make A New Life in the Country followed former finance worker Hani and schoolteacher Sarah, who left their three bedroom, semi-detached house in Croydon and well-paid jobs, to start up a brewery in the Malvern Hills in Worcestershire.

For Sarah, who oversees most of the work in the warehouse, the day starts at seven, ends late and is always busy as she brews up thousands of litres of beer a week.

She told Ben that she is constantly torn between being a business owner and  being a parent.

While Hani and Sarah said they’ve managed to walk the line between ‘crazy’ and ‘brave,’ some viewers felt the couple had it harder in Worchestershire than in London.

‘The couple in the Malvern Hills don’t seem to have swapped their lives at all. The mum doesn’t seem to see the kids first thing and they both work beyond 9pm,’ one observed. 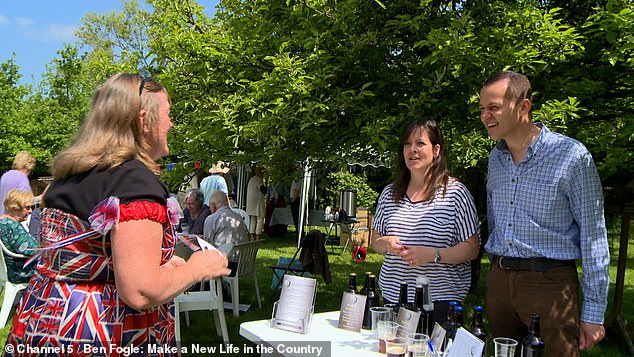 Hani and Sarah pictured right) left their comfortable lives in South London in order to open a brewery near the Malvern Hills in Worcestershire and spend more time with their children. They feature in tonight’s Ben Fogle: Make a New Life in the Country

The couple who are parents to two children under ten, Florence and Edward, were first filmed in the early days of the venture while Sarah experimented with different brews in the kitchen and Hani looked after the children and finances.

In the second part of the Channel 5 show, Ben met Hani and Sarah three and a half years after they made the decision to leave the city.

He found their brewery thriving, with Sarah brewing thousands of litres of beers a week by herself, while Hani helps her with the logistics and focuses on childcare.

‘I am active all the time,’ she admitted to Ben Fogle. ‘My mind is round, really, because there is the kids as well at home,’ she explained.

‘What they’re doing at school, what they need, what time they need picking up  and all that kind of thing. 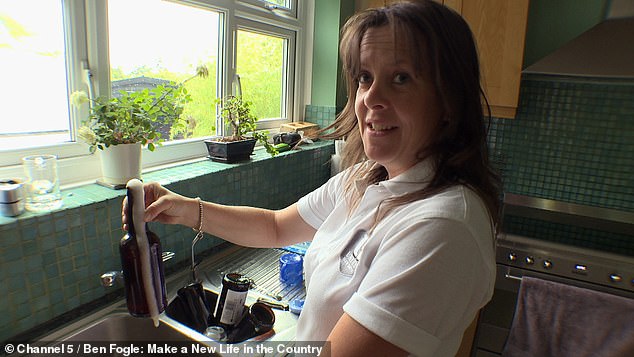 Sarah (pictured) oversees the beer brewing process, after starting to experiment with recipes in the couple’s kitchen after they made the big move

In order to cut costs, Sara does much of the warehouse work by herself, which includes brewing the beer from start to finish, finessing the concoctions by hand, filling 54kg barrels, and loading them out for delivery one by one.

‘I don’t say this lightly, there are lots of different tasks that have to be done,’ an impressed Ben said. ‘It’s like a never ending job.

‘I’m now genuinely struggling to work out how you have enough time to do everything.’

Sitting down with Ben at the end of his stay with the couple, Hani and Sarah reflect on their decision to leave the city and ‘step out into the unknown.’ 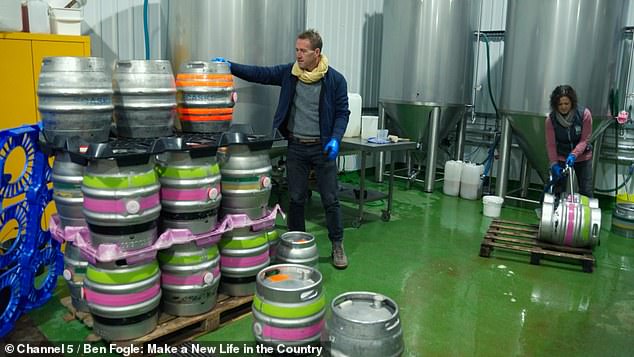 Three years after Hani and Sarah (right) move to the West Midlands, Ben comes to visit to witness how well their business is doing

‘There’s a fine line between brave and stupid but I think it’s working out the right way,’ Sarah joked.

‘You have to have a lot of craziness to do something like that.

‘I don’t think we’d still be here was it not for the welcome of the community,’ she goes on.

When the couple first arrived in Worcestershire, the mother-of-two had to come up with original brews she tested herself in their kitchen, while they waited for the building permission to turn the chicken shed they bought into a lucrative brewery. 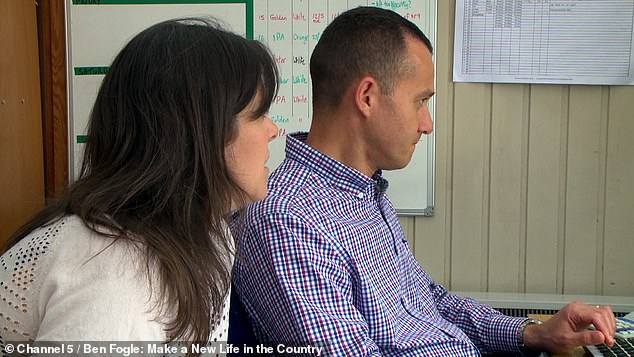 Through trial and error, Sarah managed to come up with three different brews that she hoped to sell on a larger scale down the line.

A test taste with locals at a fair proved her concoction a success, however, when it became times to try and brew it on a larger scale, Sarah was nervous.

‘My recipe works on a small kit, but I don’t know how it’s gonna do on a larger kit,’ she said.

In order to brew 700 bottles of her home beer, a friend of the couple welcomed Sarah in his medium scale brewery. She explained that for her brew to be a success, she needed to get her calculations exactly right.

However, her hopes were crushed two weeks later when some of the beers in the test batch came back too fizzy to sell. 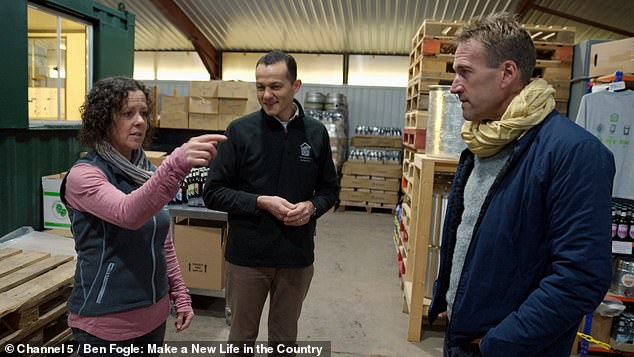 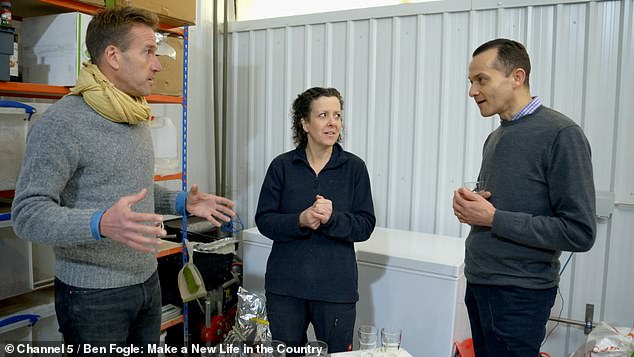 ‘Even if I open one and it’s OK, I don’t know which of those bottles are okay and which are not, so we can’t sell any of it,’ Sarah told the camera.

In spite of pouring hundreds of pounds down the drain due to the failed experiment, she refused to be defeated and instead said: ‘We’ve got to get ready to brew tonight.’

While Sarah powered through her brewing process, overworked businessman Hani relished the time he got to spend with his children.

The father-of-two explained he would rarely see his kids during the week in London due to his demanding job.

He would go through 60 hours of week at a job so stressful, heart defibrillators could be found on each floor of his company’s building. 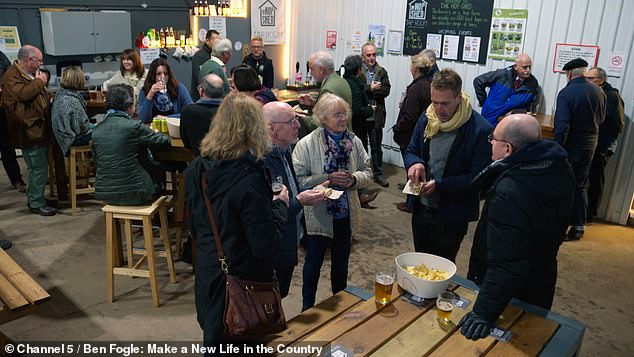 It was their love for their children that pushed Hani and Sarah to move to the countryside.

But in Worcestershire, the happy dad delighted in the moments he got to spend with Florence and Edward, preparing them for the day and picking them from school before going on walks during the afternoon.

Hani, enjoying a much more relaxed lifestyle in the West Midlands, told Ben that he and Sarah rotate duties during the week, and that he found that childcare had a ‘terrific amount of value.’

‘We’re not without stress, but it’s a completely different kind of stress,’ he added.

Some viewers felt that the couple’s decision to move to the countryside was not that interesting.

‘Wouldn’t that be great if there was a telly show about poor people doing what they can for a better life as opposed to one about rich people “fed up” with their “very well paid” jobs,’ one asked.

‘I usually like your Channel 5 shows, but tonight could’ve been titled “lucky finance worker and family lead nice life in the country with brewery,” the end,’ another wrote.

Others recognised that Sarah and Hani did hard work at the brewery, especially Sarah, who some called a ‘machine.

‘For the first time this series, I have zero jealousy. Their new life looked 100 times worse than their old one,’ one said.

‘Whilst initially thinking “urgh, London people putting the prices up” it looks like this family have really made an effort to build their business, connect with the community and share the parenting,’ another applauded.

‘What a brave decision to leave successful jobs to open a brewery. Such a fabulously inspirational story. Well done you guys,’ said another.

Ben Fogle: Make a New Life in the Country is available on My5.