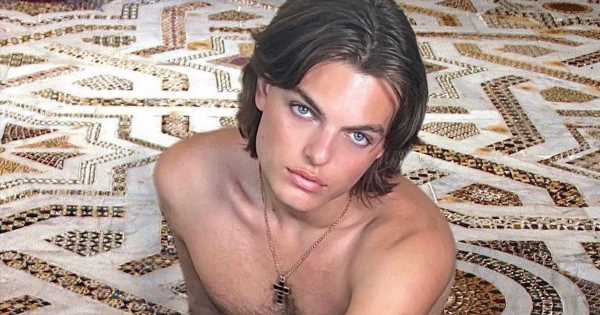 The 20-year-old displayed his gym-honed physique as he posed for a shirtless photo on a tiled mosaic floor.

Son to actress Elizabeth Hurley, the model looked directly into the camera as he showed off his new designer shoes.

In the snap, Damian flaunted his black and gold trainers that are worth £790.

Although the young star didn't have to splash the cash as he thanked the luxury brand for gifting them to him.

Going with his flashy new kicks, he paired the shoes with slim-fitted black trousers with a long black and gold cross chain.

He captioned the snap: "Landed home to the sexiest gift. Huge thank you @Versace @Fendi xx"

It wasn't long before people commented on the image, including his number one fan, his mum.

Elizabeth commented on the post, writing: "My beautiful baby"

One fan said: "You are beautiful!!!" while another added: "You are so perfect!!"

Someone else commented: "Ur literally ethereal"

William starred alongside Damian's mum Elizabeth in E!'s soap opera show The Royals which ran four seasons from 2015 to 2018, although it's recently hit our screens once again as it's emerged on Netflix.

With the news of it now landing on the streaming giant, Elizabeth gave her 2.3m Instagram followers a glimpse at some behind the scenes snaps from filming.

She also shared some raunchy images of her on set which featured her in some racy lingerie, a maid's outfit and even a mesh nightie.

One photo the model was snapped holding a script in hand wearing a white robe and jewelled crown with another showing her and lookalike son Damian.

In The Royals, Elizabeth played Queen Helena Henstridge in the series which is a fictional contemporary queen consort of England.

Taking a trip down memory lane, Elizabeth captioned the series of images: "The Royals has dropped on @netflix All four seasons. Such happy memories of making such a fun, silly show about a fictitious British Royal Family."

Sara Pascoe reported celebrity after viewer said he was rapist