Home » Lifestyle » Dementia: How often do you dream? Your dreaming habits could determine your risk 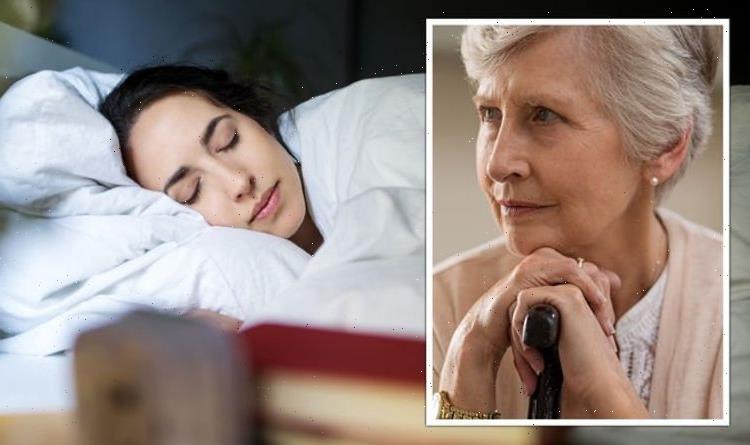 Dementia: How often do you dream? Your dreaming habits could determine your risk

Dementia, which is typically caused by Alzheimer’s disease, affects an estimated 850,000 people in the UK alone. There is mounting evidence that the disorder is caused by decreased cerebral blood flow, which damages and eventually kills brain cells. A new study conducted on mice, has shed new light on brain activity, notably blood flow, during the REM stage of sleep. Study authors believe the findings could pave the way for the development of new therapies.

In both mice and humans, REM sleep is characterised by rapid eye movements and vivid dreams.

During this phase the arms and leg muscles become temporarily paralysed, to prevent you from acting out your dreams.

Over the course of a lifetime, the amount of time a person spends in the REM stage of sleep diminishes progressively.

This holds significance for Alzheimer’s patients, as blood flow and neural activity peak during the REM sleep stage.

Deprivation of REM sleep could therefore have considerable impact on the degeneration of cognitive health.

To better understand the effect of sleep on cognitive health, a team led from the University of Tsukuba used a technique to directly visualise the movement of red blood cells in the brain of mice during states of wakefulness and sleep.

Senior author of the study Professor You Hayashi said: “We used a dye to make the brain blood vessels visible under fluorescent light, using a technique known as two-photon microscopy.

“In this way, we could directly observe the red blood cells in capillaries of the neocortex in non-anesthetized mice.

The researchers measured electrical activity in the brain to look for differences in blow flow during REM sleep, non-REM sleep and wakefulness.

Professor Hayashi added: “We were surprised by the results.

“There was a massive flow of red blood cells through the brain capillaries during REM sleep, but no difference between non-REM sleep and the awake state showing that REM sleep is a unique state.”

The team then disrupted the rodent’s sleep, which resulted in ‘rebound’ REM sleep – a stronger form of REM sleep – that compensated for the disruption.

They observed that blood flow increased significantly during rebound REM sleep, suggesting that the REM strength might be determined by blood flow.

The team pointed out that A2a receptors could lead to the development of new treatments.

The A2A receptor is a major target of caffeine and important for regulating myocardial oxygen consumption and coronary blood flow.

They explained: “These results suggest that adenosine A2a receptors may be responsible for at least some of the changes in blood flow in the brain during REM sleep.”

The findings build on existing research that has linked a lower percentage of REM sleep and a longer time to get to the REM sleep stage to a greater risk of dementia.

This is believed to be due to increased blood flow during REM sleep which could help clean out metabolic brain waste that builds up during the day.

In fact, researchers concluded that for every percent reduction in REM sleep there was a nine percent increase in the risk of dementia.

According to the researchers, such findings could pave the way for the development of new treatments, for conditions such as Alzheimer’s.