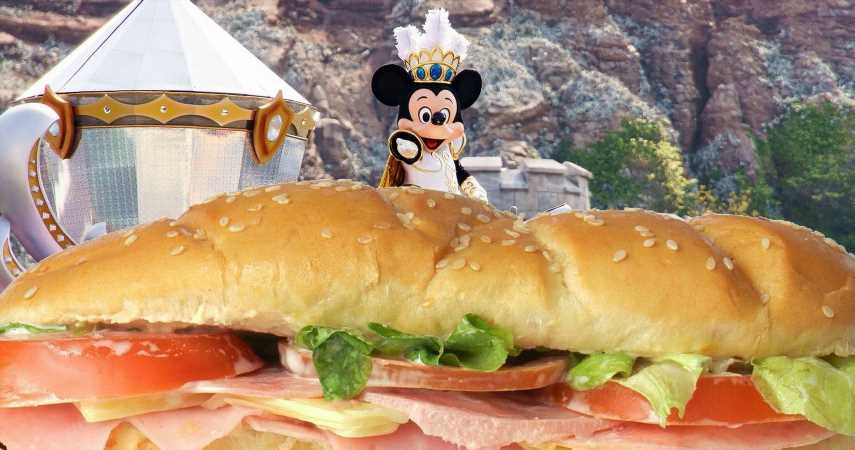 Disneyland is about to up the ante on a classic lunch, as the theme park is unveiling a $100 sandwich made to feed an entire family. The giant meal will be giant for a reason.

Sold in Pym Test Kitchen, a restaurant located on the super-hero inspired Avengers Campus, the big bite is supposed to emulate the life of everyone’s teeny little superguy, Ant-Man. It’s in Pym Test Kitchen that the soda is gigantic and the condiments are even bigger. It gives all guests an opportunity to live in a world that is truly larger than life.

The “Family-sized Pym-ini” sandwich is made to feed six to eight people and the price clocks in at an official $99.99. Starving patrons can chow down on salami, rosemary ham, provolone, and sun-dried tomatoes spread out on a toasted focaccia bun. The gargantuan delight comes with marinara dipping sauce and an arugula salad. If you just want a solo version, it’ll run you $14.50. They also offer a “shrunken, child-size” version called “Teeny Pym-ini” for $10.

Although, in a strange mystery twist, Disney News Site WDW News Today screengrabbed a version of the menu last week that showed a fourth option. A medium-sized Pym-ini sandwich, priced at $57.99, offered little description other than the layout of the sandwich. It appears to have since been removed from the official menu.

The Pym Test Kitchen opens its doors on June 4, as does Disneyland California’s Avengers Campus. Other attractions include the Guardians of the Galaxy ride and a new attraction called WEB slingers: A Spider-Man Adventure.

The new campus will feature fresh food carts as well, including Shawarma Palace and Terran Treats. Fans can meet their favorite Marvel superheroes throughout Avengers Campus.

It has been a hard pandemic for the Walt Disney Company. According to the House of Mouse, COVID-19-related disruptions took a financial toll of more than it $1.4 billion in operating income in the opening months of COVID alone. Although making a meager, by their standards, profit of $460 million in that quarter, it is down drastically from the same quarter a year earlier. With closings across the board and a steady reopening to follow, Disney has been banking on a return to normal to push their profits back to the days before the virus. With hundred dollar sandwiches, that might be a goal well within mouska-reach.