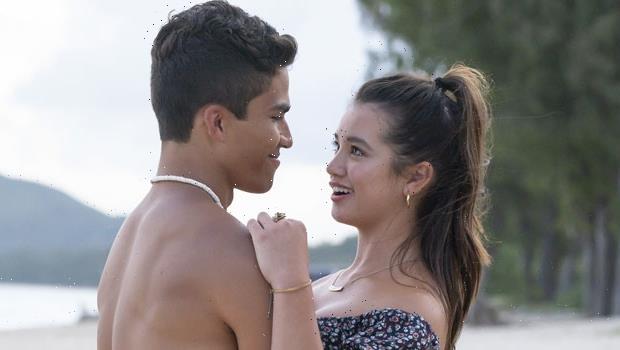 The ‘Doogie Kamealoha, M.D.’ finale was full of ups and downs for Lahela, her family, and friends. HL got EXCLUSIVE scoop from creator Kourtney Kang about the finale and her plans for a second season.

The Doogie Kamealoha, M.D. finale ended with Lahela right where she needed to be. At the start of the episode, Lahela was planning on following Walter on his surf tour. When she told her parents her plans, they immediately said no. Clara even denied Lahela’s request for a sabbatical, so Lahela quit her job instead. However, Walter realized that he couldn’t let Lahela give up on her dream of being a doctor, so he decided to take another year before going on tour.

In this EXCLUSIVE interview, HollywoodLife is breaking down the entire finale with creator Kourtney Kang. From debates about how the season ended to the Kai and Steph situation to her season 2 plans, we discussed it all. Read our Q&A below: 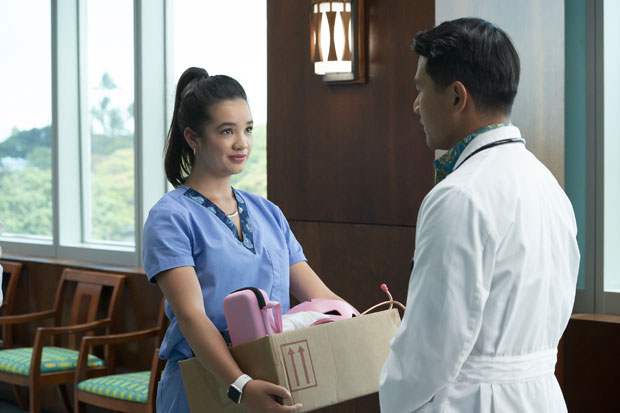 I was wondering the entire time whether or not Lahela would actually go to Australia. Was there ever a situation in the writers’ room where you thought about that and possibly wanted to head in that direction?
Kourtney Kang: Yes. We definitely went back and forth. It’s so funny because there were a lot of different views about her going. Some people were like, she’s 16. The parents can’t let her go. There were other folks who were like, she’s a doctor, of course, she can go. It really was a heated debate, and we really did think about having her go and have that experience. We discussed at length what it should actually be and then, ultimately, it felt like her realizing she was right where she needed to be felt right.

I could have seen it go both ways. Earlier in the episode, Lahela actually quit her job. Was that always something that you wanted to toy with Lahela and Clara, especially with the mom-daughter and also co-workers dynamic?
Kourtney Kang: Yes. That is something that we talked about for a long time and is part of what makes that relationship so much fun to write, which is they are mother and daughter and also employees so there’s that boss-employee situation. She can rule her life at home, but in the professional world, Lahela can do what she wants to do as an employee. That was a really fun scene to write, and I thought that Kathleen [Rose Perkins] and Peyton [Elizabeth Lee] play it so well. I thought Kathleen especially did a great job of when you’re a parent you’re sort of pushing the envelope and hoping your bluff doesn’t get called sometimes. Lahela’s so smart she calls it. She knows that she has the ultimate card there. Steve Joe wrote that episode and broke that scene, and I thought he did such a wonderful job on the script in its whole and also that scene, in particular, is a real favorite of mine.

I’ve gotten into a fight with my mom where I’m like, “Well, I’m never going to talk to you again.” Obviously, my mom calls my bluff on that. But Lahela wouldn’t be Lahela if didn’t call her mom’s bluff.
Kourtney Kang: I think for us that whole emotional arc of season 1 has been Lahela figuring out her independence and who she is. Her mom from the beginning has been an obstacle to that at points because they have so much in common, and she admires her mother so much, but she’s also such a force to be reckoned with. So that moment of Lahela standing up to her I think was really crucial in the whole story of her arc this season, which was figuring out who she is. She found that strength inside of herself to stand up to her mom and say, no, this is what I’m going to do. Ultimately, that strength helped her realize that what she needs to do is stay right where she is. 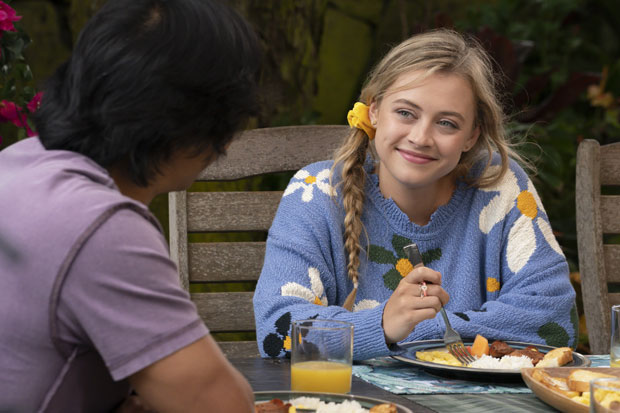 Steph is the perfect best friend. I loved watching that burgeoning connection between Kai and Steph. Did you discuss really going there with a romance, or did you always intend for this slow burn?
Kourtney Kang: We always loved the idea of this sort of unrequited love where Steph has been pining for him this whole season. The kiss was sort of a last-minute revelation of one of our writers, Matt Kuhn, who wrote that episode. He added to it, and we all loved it. I think it’s such a great moment because you don’t know. Is he just hiding it? Does he really feel something? I feel like so much of when you’re a teenage girl is trying to decipher what boys are thinking. It’s so complicated, and the answer most times is nothing. They’re thinking nothing. I really love that moment. Matthew [Sato] and Emma [Meisel] play it all so well. Those two are so fantastic, and they’ve become so close and real-life friends. It’s really fun to see those guys play together.

As far as a possible season 2, do you have set plans already?
Kourtney Kang: We’re really excited. We’re hopeful that we’ll get to do a season 2. The thing that I’m really excited about is our cast is so phenomenal. I think season 1 Lahela was our sort of eyes-in, Doogie of it all. And now season 2, I’m so excited to get more into more of our supporting characters at home and at the hospital, especially at the hospital. We have Jeffrey [Bowyer-Chapman] and Mapuana [Makia] and Ronny Chieng who are all so funny. I feel like with more runway we will be able to delve more into their emotional lives and see what’s happening there. So that’s one thing we’re really excited about, and then also at home, Brian Patrick and Kai are so funny and Steph as well. I watch the show each week with my family. I have three girls, and they love those kids’ stories. It’s so fun to see them enjoying that, so I’m excited to dive more into that as well.

Benny and Clara have such a strong marriage. I loved seeing Jason [Scott Lee] play with the comedy elements so much this season and but also being there for those really touching moments. I would definitely want to see more of them in season 2.
Kourtney Kang: Jason is so funny. He’s just a funny guy. It’s been such a delight to see that variety of dad on TV for me personally because he’s based a lot on my dad, who is from Hawaii. He’s a local boy, and Jason just has that chill vibe to him and that applied to parenting. It’s a perspective that I feel like we haven’t really seen that much on TV. I’m excited to tell more stories focused on Benny next season and also that ties into one of the things that I love about our show is that it’s set in Hawaii and being able to tell stories that only our show can tell. That’s another thing for season 2 that we’re really excited about is to delve more into those stories that really feature Hawaii and what it’s really like for the folks who are living there.

Neil Patrick Harris didn’t make an appearance in this first season. Do you have a plan for him to guest star if you do get a season 2?
Kourtney Kang: We’re hopeful that he would come and play with us in season 2. It’s one of our writers’ room’s favorite things to pitch: what could we do with Neil if we get him to come out to the show? There’s a lot of ideas percolating.

Margaret Cho and Max Greenfield were just a couple of notable guest stars in the first season. Are there more on your bucket list who you would love to come play with you guys out there?
Kourtney Kang: Yes. There are a lot of folks that we would love to have guest star on the show. Somebody I love is Ken Jeong, who is an actual doctor. The list goes on and on. We’ve been so lucky. Max Greenfield was so great. Gina Rodriguez came and directed an episode, so we would love to have her come back. Randall Park, we’d love to have him come back. It really was so much fun to get such great people, and we’re hoping in season 2 to keep it going. Everybody who came out, one of the things that I love is that they all had such a wonderful time. Our crew is so warm and welcoming. The cast is so lovely that we really did create a warm, wonderful place for folks to visit. 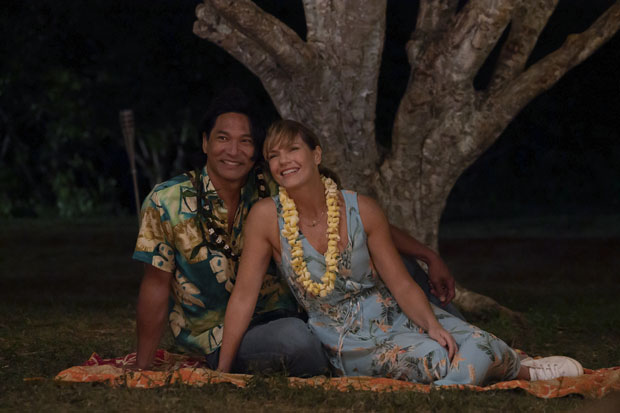 Everything seems pretty perfect for Lahela and Walter. As we all know, teenage relationships have their ups and downs. Is that something that you would sort of dive into in season 2?
Kourtney Kang: We definitely want to dive more into their relationship in season 2. Those two are so great together. Alex Aiono, who plays Walter, is so fantastic. We love having those two together. But I think season 1 was about her first relationship, and then I think season 2 becomes about what happens once you really settle into a relationship for the long haul and the problems that arise, and the temptations that come up. We’re really looking forward to leaning into that romantic element of the show. My favorite shows we’re always Friends. I wrote on How I Met Your Mother for a long time, and I think pairing those romantic storylines with really funny jokes is always makes for a good show.