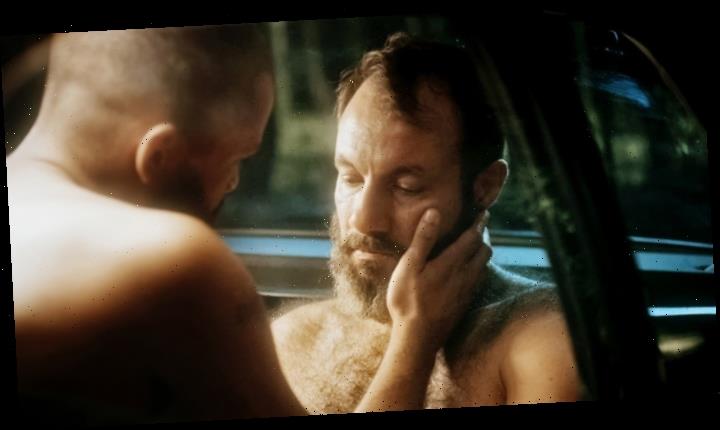 Tom of Finland has a lot to answer for. His gorgeously lurid illustrations of bulging male musculature, tumescent crotches, extravagant mustaches and granite jawlines not only defined the iconography for a joyously irreverent gay subculture that had previously been given little expression, it also established a hypermasc gay dreamboat ideal that derives a lot of its power from its sheer unattainability. That gap, between everyday reality and oiled, leather-daddy fantasy certainly tortures Sandro (Leandro Faria Lelo), the central character of “Dry Wind,” and if it’s one that Daniel Nolasco’s offbeat, mischievous, explicit debut also cannot quite bridge, damned if it doesn’t have a good XXX-rated go at it.

Sandro is not a Tom of Finland fantasy. He is a middle-aged factory safety officer at a plant in rural, inland Brazil, whom we first meet hanging out hairily at the local open-air pool. Sandro dangles his feet in the pool disconsolately, surreptitiously eyeing passing groins and rippling abs, particularly noticing Ricardo (Allan Jacinto Santana), a toned young heartbreaker with soulful eyes and a broad-shouldered, narrow-hipped swimmer’s build. Gratifyingly, Ricardo notices him back, and the next day, after some heady eye contact across the factory canteen (Ricardo works there too), archly observed but unremarked on by Sandro’s perceptive best friend Paula (Renata Carvalho) they meet up for a tryst in the woods nearby.

For a time, this seems to be the movie Nolasco is making: a sensitively observed, unusually graphic gay romance that will perhaps chart a relationship marked by disparity in age and appearance. But with a change in tone so abrupt as to be jarring, reflected even in the lighting, as DP Larry Machado’s photography clicks over from the sandy daytime pallor of Brazil’s arid Midwest to the hot pinks and sleazy neons of a night in some metropolitan underbelly, we’re introduced to Maicon (Rafael Theophilo).

Leaning against a motorbike, clad in leather and mirrored sunglasses, his slicked-back peroxide hair hidden under a biker’s cap, Maicon is a gay beefcake fantasy made flesh, and Sandro is instantly obsessed. So much so that he all but rejects the charming Ricardo, the better to pursue his unhealthy fixation on the newcomer. Except that then Maicon, who also comes to work at the factory which seems to be the sole employer in the area, takes up with Ricardo, and Sandro has to deal (badly, pettily) with being frozen out entirely.

During this period, his lapses into a dreamstate characterized by extravagantly exaggerated gay iconography become more frequent. A police interrogation is carried out by a tattooed, truncheon-wielding Übermensch whose pectorals can scarcely be contained by his clinging uniform. A trip to a nightclub, following a stalkerish act of seat-sniffing, becomes an odyssey through a Tom of Finland tableau vivant, as stubbly a drag queen leads Sandro into a warehouse featuring every masc gay stereotype imaginable. Or, to use the collective noun, a full Village People.

Still, Nolasco’s film makes the most of its craft. The warm electro pulsations and gyrations of Natalia Petrutes’ score complement the expressive, textural potential of Machado’s cinematography, from the evocative opening, which is simply a massive sheet of pale canvas billowing in the wind, to the contrast between droplets beading on the curls of a hairy back and water pearling on the tattooed neck of a young Adonis. And from the raspy velcroing of two beards rubbing against each other to the dirt of the forest floor working its way into moaning mouths and writhing joints, the film is not just about sexual fantasy, it is unashamedly fascinated by the reality too.