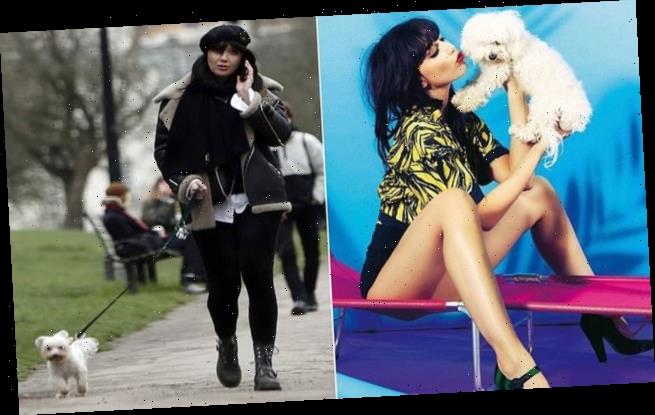 Strictly Come Dancing star Daisy Lowe is distraught after witnessing a thug kick her beloved pet dog into the air while she was taking him for a walk in the park.

The lingerie model says her white Maltese terrier, Monty, was left with a broken knee, severe bruising and suspected internal bleeding after the horrific attack.

‘He kicked my dog in the stomach, who went flying,’ she says. ‘I really wish I had caught that horrible man.’

The incident happened earlier this week in Primrose Hill, a swanky corner of North London popular with the rich and famous.

Lowe, 32, is appealing for witnesses who might be able to identify the white male attacker, who fled the scene. 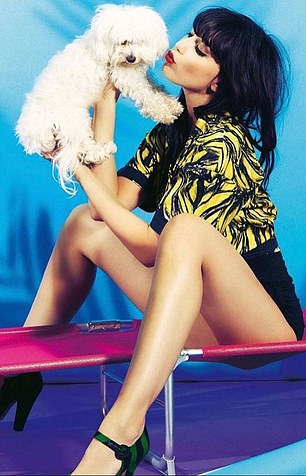 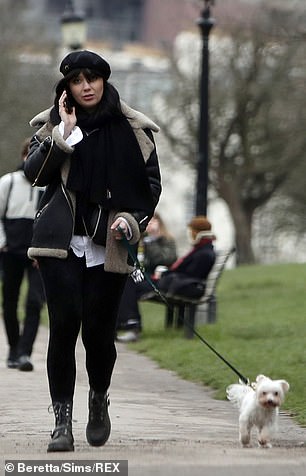 ‘Monty is badly bruised and still finding walking difficult,’ Lowe says. ‘But we think that with a lot of rest, cuddles and some food, he’ll be OK.’

One of Lowe’s close friends tells me: ‘Daisy is frightened to head back to the park. She’s still nervous and worried that another incident might happen as the attacker is still out there. She was very shaken by it as Monty means the world to her.’

Her beloved dog (pictured right with Daisy before the attack) is 13 years old and was adopted by Lowe while she was living in New York.

Daisy, who partnered Aljaz Skorjanec on Strictly in 2016, is going out with property developer Jordan Saul.

Her former boyfriends include DJ Mark Ronson and Matt Smith, who played the young Prince Philip in the first two seasons of Netflix hit The Crown.

Emma had some big shoes to fill…

Emma Weymouth has clearly always been a dedicated follower of fashion.

The Strictly star shared this adorable photo of her as a little girl in Dame Vivienne Westwood’s Mayfair boutique.

She’s wearing a pair of the punk icon’s red platform shoes. She posted the photo to celebrate the designer’s 80th birthday, saying: ‘I’ve always been a huge admirer.’

Emma, the Marchioness of Bath, is married to Ceawlin, who owns the Longleat estate in Wiltshire and its wildlife park.

The Crown star Emma Corrin, who came out as what she described as ‘queer’ this week, has advice for her fellow actresses.

‘I have spent the last year and a bit . . . getting better at saying “No”. I’m naturally a people-pleaser, and I think this will be the case for a lot of young people, especially young women in the industry,’ declares the actress, 25, who plays Princess Diana in the hit Netflix drama.

‘You often feel that you should pander to anyone who is more experienced or has more power than you, so that you end up saying “Yes” or put yourself in a vulnerable position in something you don’t want to do.’ 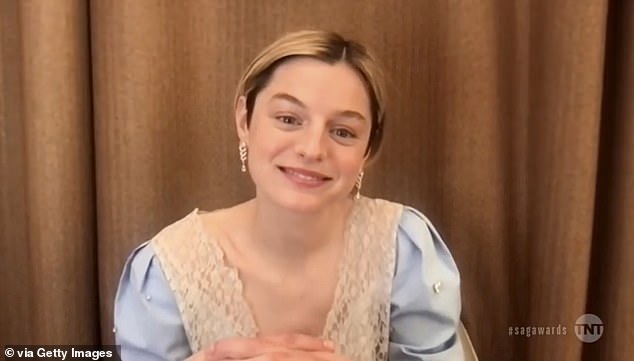 The Crown’s Emma Corrin, who came out as ‘queer’ this week, has advice for fellow actresses

Voice star gears up for court battle with her brother

The Voice star Bo Bruce has long been estranged from her father, the Earl of Cardigan. Now, I can disclose that she’s suing her brother, Thomas.

Bo, 36, who became a star after competing on the TV talent contest, declines to say what the case is about.

Thomas, 39, fell foul of their father (whose ancestor led the ill-fated Charge of the Light Brigade in 1854) when he sold 16th-century Wiltshire mansion Tottenham House for £11.5million in 2008 after his dad moved to the States. They have since reconciled.

While we must wait to sun ourselves in the Mediterranean, Sir Mick Jagger is already there. And now his girlfriend, Melanie Hamrick, appears to have joined him.

British tourists have been forbidden from entering Italy since December but the singer, 77, sneaked into Sicily before the ban.

This week, Hamrick, a 34-year-old American ballerina, shared this photo of herself sunbathing. 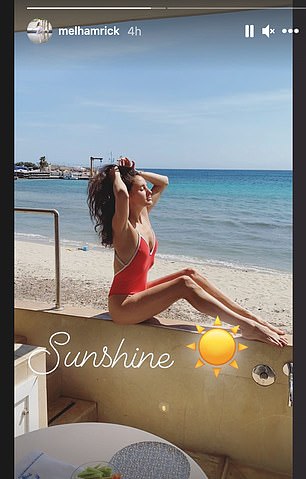 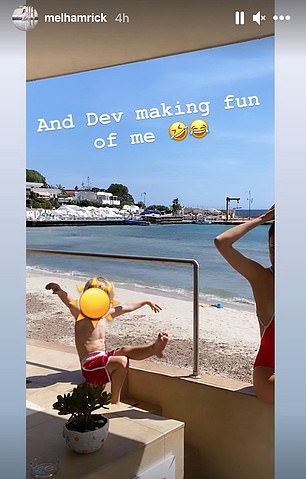 Mick Jagger’s ballerina girlfriend Melanie Hamrick has joined him in Sicily this week and (right) the couple’s son Deveraux also got in on the posing action, as he copied his mum’s snap

The neo-gothic folly built in the garden of his Worcestershire home, Wolverton Hall, has been included in a new book, Romantics & Classics: Style In The English Country House, by Jeremy Musson and Hugo Rittson Thomas.

Getting smartened up for your first time eating out with friends next week? Kirstie Allsopp says proudly that she never allowed her standards to drop during lockdown.

‘I didn’t let myself go,’ declares the television presenter, who lives with property developer Ben Andersen.

‘I get up, I blowdry my hair . . . I don’t think it’s fair on Ben apart from anything else. I still wear perfume — the whole thing.

‘The idea I might have stayed in bed this morning and worked from there makes me feel itchy.

It’s not in my DNA to lounge around in casual clothes. The slobbiest I get is a nice dressing gown.’ 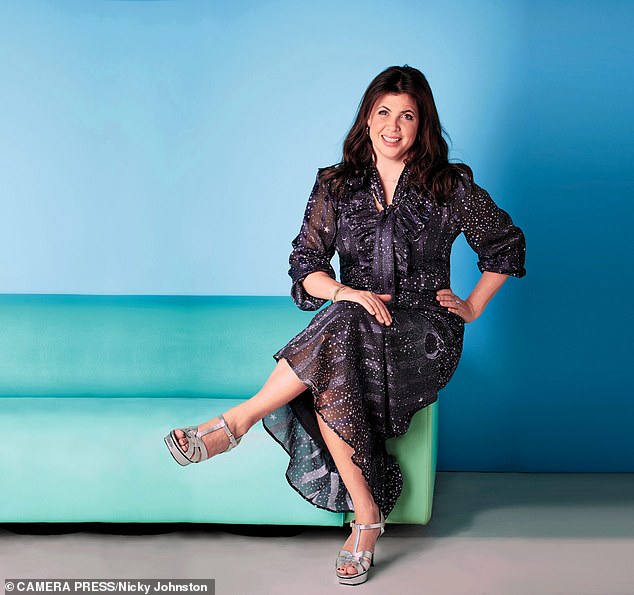 Trumpeted as the friendly antidote to Facebook, social network Nextdoor has been abuzz in Chipping Norton with ‘multiple sightings’ of a grey Mitsubishi SUV driving through the lanes of Oxfordshire, hotly pursued by two men in sunglasses in a black Range Rover.

One of the curtain-twitchers who posted the reports hinted darkly that it looked like the operation of some drug gang.

However, a day later, there was a sheepish explanation on the website that the ‘drug dealer’ was, in fact, David Cameron — being followed by his protection officers — as the former PM went about his daily, and laudable, charitable work delivering meals to elderly residents.

Princess Anne is to herald the end of lockdown by launching a new equestrian event at her country estate, Gatcombe Park.

The Queen’s daughter, who cancelled the Gatcombe Horse Trials after 29 years in 2019, is to host the final of the Cotswold Cup at her 700-acre Gloucestershire estate in September. 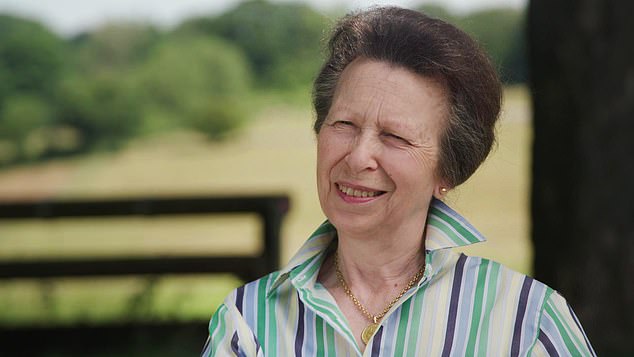 And the organisers hope it will become an annual fixture, with the Princess presenting the prizes.

‘We are paving the way for future young riders,’ organiser Amy Morgan tells me. She hopes the championships will provide an opportunity for young unaffiliated riders.

The Princess says: ‘I hope competitors will be inspired by the setting and that it will give them something fun and challenging to aim at as sport gets going again after lockdown.’