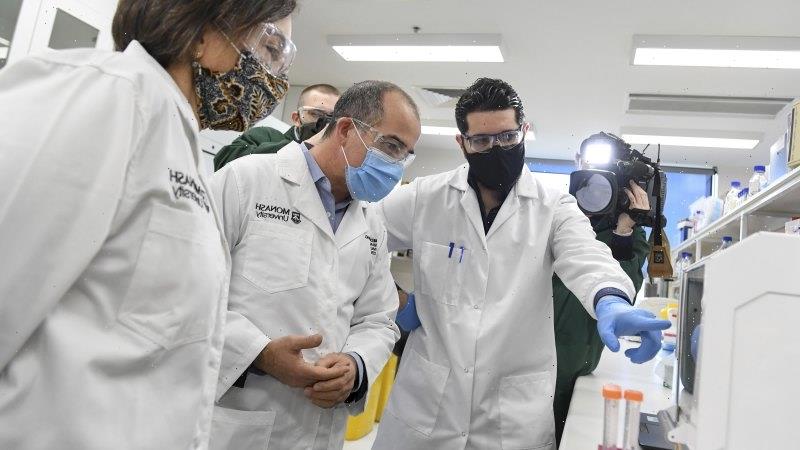 An emergency meeting of national cabinet has been called for Monday morning with one topic on the agenda – the rollout of COVID-19 vaccines – as the Premier of NSW warned that the next few days will be critical to halting a growing outbreak in Sydney.

At the announcement of trials for a new, locally developed vaccine that will use the same mRNA technology as the Pfizer jab, Victoria’s Health Minister Martin Foley said his government would raise the current dearth of vaccine supply at Monday’s meeting and push for the Commonwealth to treat the rollout as a “race”. 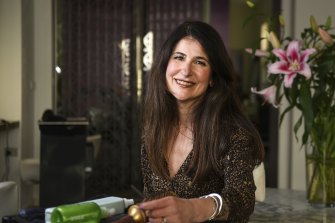 Melbourne hairdresser Sofia Basile did not want to get the AstraZeneca vaccine and is now planning to get a Pfizer vaccination.Credit:Penny Stephens

In Sydney, where an outbreak has grown to nine cases, masks are now compulsory in seven local government areas inside shops, theatres, aged care facilities, for front-of-house hospitality staff. They are also compulsory on public transport.

But Premier Gladys Berejiklian warned that they may have to impose further restrictions. “The next few days are critical,” she said. “We ask people not to be complacent. If cases continue to emerge, we will need to go further.”

Brisbane is also on high alert after Queensland Health discovered an international air crew member who tested positive for COVID-19 on Saturday after spending 14 days in hotel quarantine travelled to the CBD overnight. No new local cases were recorded in Victoria on Sunday.

Prime Minister Scott Morrison, who is isolating at The Lodge in Canberra following his trip to London, Paris and Singapore last week, has scheduled the emergency national cabinet meeting for Monday morning.

The sole item on the agenda is the ramifications of the vaccination rollout following last week’s medical advice to further limit the use of the AstraZeneca vaccines.

There had been fears of a drop in demand for vaccines following the changed advice, but authorities say the take-up rate is actually increasing. Melbourne hairdresser Sofia Basile, 53, said she had not wanted to get the AstraZeneca vaccine and was “very relieved” to now be eligible for Pfizer.

“I wasn’t going to have that done. I was going to wait for the Pfizer,” she said. “I am very comfortable with making an appointment now.

“I am definitely one of those people who is very relieved to hear the announcement that 50 to 60- year-olds can have Pfizer now. 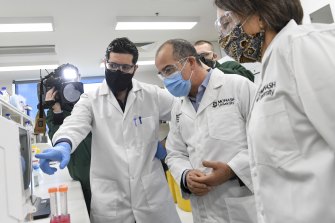 Despite last week’s move by Australia’s Technical Advisory Group on Immunisation to declare that the AstraZeneca vaccine should no longer be recommended for people aged between 50 and 59, health authorities have seen no drop off in demand for COVID-19 vaccines.

Federal Chief Nursing Officer Alison McMillan said more than 64,500 doses were administered on Saturday, an increase of about 3700 on the same time last week.

“We’re still working to get everyone in Australia who is willing to get the vaccine, their first dose by the end of the year, Professor McMillan said. “We’re still on track to do that and that’s our aim. If we can do it sooner, the better.”

Changes in demand for the vaccines have not altered the deals the federal government has with its suppliers. 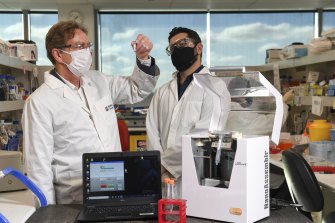 A spokeswoman for AstraZeneca declined to comment on its contractual arrangement with the government but said the company was committed to providing 50 million locally produced doses of its COVID-19 vaccine.

A spokeswoman for CSL, which is making the AstraZeneca vaccine in Melbourne said the company “remains committed to meeting its contracted arrangements with the Australian government and AstraZeneca”.

Pfizer has struck a deal with the Australian government to supply 40 million doses of its vaccine over the course of this year.

“The supply of vaccine in Australia was developed following consultation with the Australian government to meet the specific public health needs in Australia … which led to agreements to supply 40 million doses over the course of 2021” a Pfizer spokesman said.

How do you build an mRNA factory?

The process of building an mRNA vaccine is reasonably simple. One major advantage: the key ingredient, mRNA, is incredibly small and light. It would take less than two kilograms of mRNA to vaccinate all Australia; to make that two kilograms, just 20 grams of DNA is required.

Scientists begin with a target protein they want the body to produce. In the case of COVID-19, that is a copy of the virus’s spike protein.

Scientists write the genetic code to produce the target protein using the four letters of DNA: G, C, A and T, producing a small double-helix strand of DNA about 4000 letters long.

Custom DNA is regularly used in many research projects and can be produced at many factories offshore; scientists often order it and find it at their doorstep in a small vial tucked into an envelope.

The custom DNA is then fed to E. coli bacteria, which copy it hundreds of times. Several Australian facilities to do this already.

Those copies are then placed inside a stainless steel bioreactor – this can be as small as 50 litres – along with nucleotides, the raw material of mRNA, enzymes and chemicals to control the reaction.

Inside the bioreactor, the enzymes copy the double-stranded DNA again and again into single-stranded mRNA. The mRNA is then filtered out and is ready for the next step of vaccine production.

MRNA itself is extremely fragile, and would be quickly destroyed inside the body. The “secret sauce” of mRNA vaccines is packing the mRNA into tiny balls of fat known as lipid nanoparticles. When these fat balls hit our cells, the cells naturally reach out and pull them inside – where they release the mRNA.

Finding a way to either make or source the lipid nanoparticles is likely to form part of the $50 million investment by the Victorian government.

Perhaps the two largest costs are running the entire manufacturing line under the highly sterile conditions needed for pharmaceutical manufacturing, and filling the vaccine safely into bottles.

One option for fast-tracking a facility: several companies produce sterile “pods” – similar to portable classrooms – that could be bought and installed, ready to be filled up with manufacturing equipment.

Filling the vaccine into bottles – “fill and finish”, as it is known – would probably require a large pharmaceutical manufacturer such as CSL.

Trials will begin in Victoria by the end of the year on Australia’s first locally developed coronavirus vaccine that uses the same mRNA technology as the Pfizer and Moderna shots.

Acting Premier James Merlino announced on Sunday that Victoria would invest $5 million – from the $50 million fund to develop the state’s mRNA manufacturing capability – in the Monash Institute of Pharmaceutical Sciences to begin phase 1 clinical trials by November and have results by the middle of next year.

Mr Merlino again took a swipe at the Commonwealth’s delayed rollout of the vaccination program, which he described as an “absolute shambles”, and criticised the federal government for not securing more doses to meet the level of demand.

“It would be ideal if we had national leadership on [mRNA manufacturing capability],” he said.

Mr Merlino said the state never again wanted to be in a position where it had to rely on the global supply of vaccines during a pandemic.

“This will be particularly important because vaccines and this virus will be with us for quite some time; we may well need yearly booster vaccines in the years ahead,” he said.

Victoria was receiving about 71,000 Pfizer doses of vaccine each week, which has been temporarily increased to 105,000 due to the latest coronavirus outbreak. That will fall to about 83,000 doses from July 5.

When asked what the federal government could, at this stage, practically do to increase Australia’s supply of vaccines, especially Pfizer, Mr Foley said: “What we’re going to do is to make the best of the situation we’re in [and] we will continue to work co-operatively with the Commonwealth. But the issue for us is we are constrained by supply.”

Ms Berejiklian said she would seek more Pfizer doses for her state at Monday’s meeting.

“If you give us the doses, between the GP network and also the NSW government, we’ll get those jabs in the arms,” she said. “But the challenge for us is just getting the supply, getting those doses themselves.”

Monash University Professor of Pharmaceutical Biology Colin Pouton, who has been advising the state government on the project, said if the clinical trial was successful, Victoria could develop an mRNA booster vaccine that would protect against the new, more highly infectious variants of COVID-19.

The mRNA vaccines work by teaching cells how to make a protein that triggers an immune response inside our bodies.

Professor Pouton said the clinical trial could pave the way for local manufacturing. He said while the country did not have mRNA factories, it had good manufacturing practices (GMP)-certified facilities, which could produce the jabs.

However, Professor Trent Munro, one of Australia’s most experienced biotech and bio-pharmaceutical experts, told The Age last month that the Victorian government’s investment was not enough to ensure commercial manufacturing.

“The money is only one part. You need the operational partner to do that,” he said.

“In simple terms, we know what all the steps are [to make a vaccine]. But it’s like saying you can go into a Michelin-star restaurant and make the dish.”

With Liam Mannix and Rob Harris