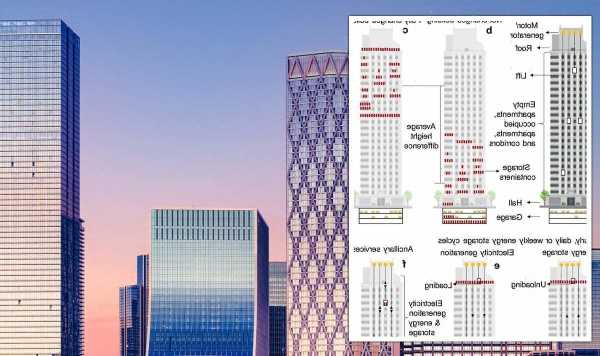 Countries around the world are rapidly building up renewable energy generation capacity in the face of rising fossil fuel prices and pressure over the climate crisis. However, this energy transition has created new challenges, particularly as experts warn the intermittent nature of renewable energy sources like solar and wind mean power has to be stored during times of high output.

In the new study published in the journal Energy, scientists have proposed a new type of gravity-based storage system which uses the lifts and the tall heights of skyscrapers to store energy.

In their study published in the journal Energy, International Institute for Applied Systems Analysis (IIASA) researchers have developed the Lift Energy Storage Technology (LEST) which stores power by lifting wet sand containers or other high-density materials

These sand containers are then transported remotely in and out of a lift with autonomous trailer devices.

The scientists write: “LEST links two storage sites, one located on the bottom of a tall building (lower storage site) and the other at the top of the same building.”

LEST could prove to be a very cost-effective solution, as high rise buildings already have lifts installed, thus removing the need for additional major infrastructure.

Researchers believe by using these skyscraper lifts, the LEST system can create additional value for the power grid and the building owner.

As the storage containers are elevated with the lift moving from a lower floor to the top, potential energy is generated and stored.

Lead author Julian Hunt, a researcher in the IIASA Sustainable Service Systems Research Group said: “I have always been fascinated with topics involving potential energy, in other words, generating energy with changes in altitude, such as hydropower, pumped-storage, buoyancy, and gravity energy storage.

“The concept of gravity energy storage has also recently received significant attention in the scientific community and start-ups.

“The concept of LEST came to me after having spent a considerable amount of time going up and down in a lift since recently moving into an apartment on the 14th floor.”

In LEST, robots would load heavy bags of sand into elevators in the skyscraper when there is a low demand for power, and then store these bags at the top site.

Then during peak times, these weights would be added back to the elevators and dropped to lower floors, generating more energy.

IIASA researchers estimate that around the world, at least 18 million lifts can be used in such fashion, with many of them spending a significant amount of time sitting still.

As an example, researchers calculate that a major skyscraper like the Burj Khalifa could potentially store up to 9MWh to 90MWh.

Outrage as Costa Coffee increases prices by an average of 14p