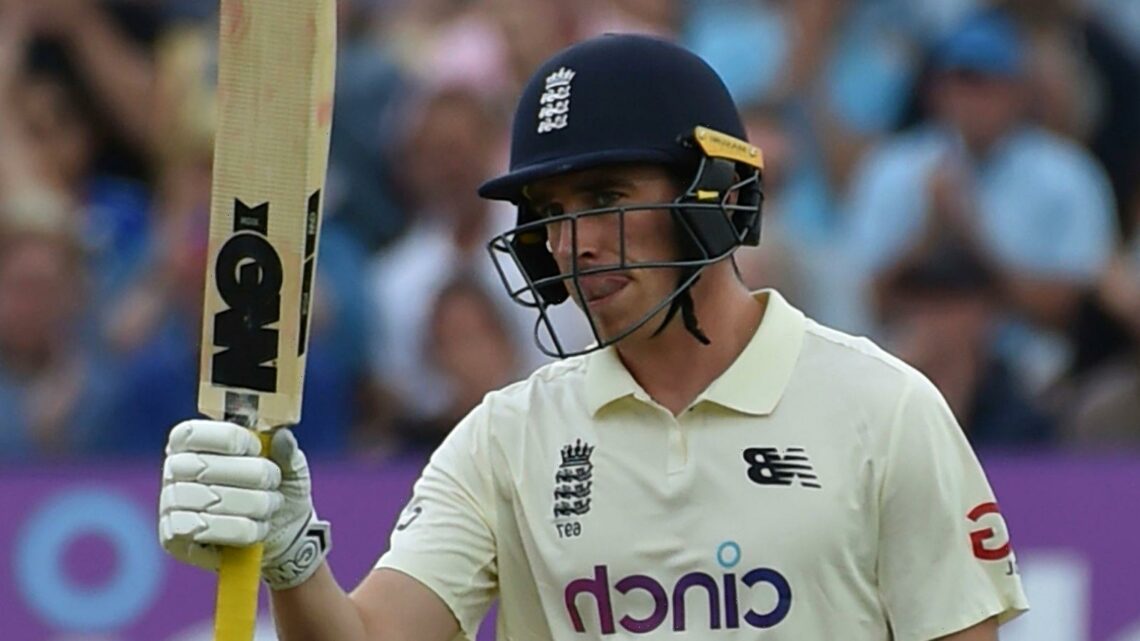 Dan Lawrence hit an unbeaten 67 to bolster England’s total after the hosts had threatened to collapse on day one of the second Test against New Zealand.

Rory Burns backed up his hundred in the first Test with a battling 81 before Lawrence, supported by Olly Stone (20) and Mark Wood (16no), helped England recover from 175-6 to close on 258-7.

New Zealand made six changes to their side ahead of the World Test Championship final next week, but, after breaking an opening stand of 72 just after lunch, they dominated the afternoon session and Trent Boult struck twice early in the evening session to leave England teetering.

Lawrence stood firm, though, and was backed up by the lower order to give the 18,000-strong crowd at Edgbaston something to cheer late in the day and provide the home side with hope of creeping up to 300 on day two. 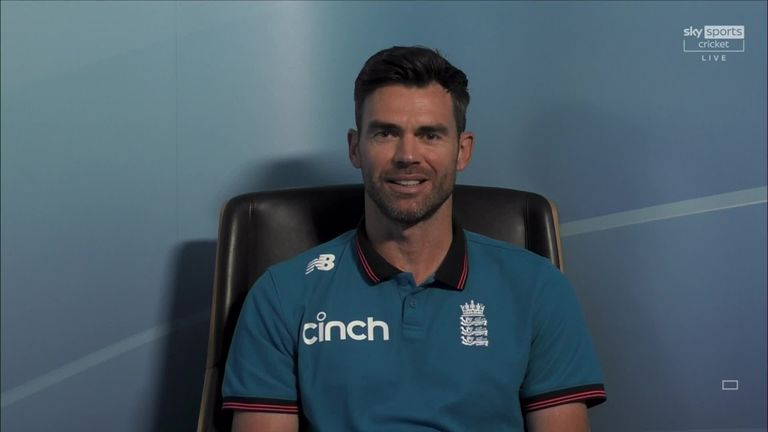 James Anderson was awarded a special shirt prior to the start of play as he became England’s most capped Test player, overtaking Sir Alastair Cook, and he would have been confident of resting throughout the first day of his 162nd Test after the hosts won the toss, batted and reached lunch without losing a wicket.

Burns and Dom Sibley, both buoyed by runs at Lord’s, were rarely troubled in the morning session, dealing with the early swing and seam movement on offer on an easy-paced pitch as they put on 67 before the interval.

It was a very different story at the start of the afternoon session, though, with England losing 3-13 in five overs; Sibley (35) edging behind to Tom Blundell, in for the injured BJ Watling, off Matt Henry before Zak Crawley’s (0) difficult start to the Test summer continued as he pushed at a wide delivery from Neil Wagner and sent the ball to third slip. 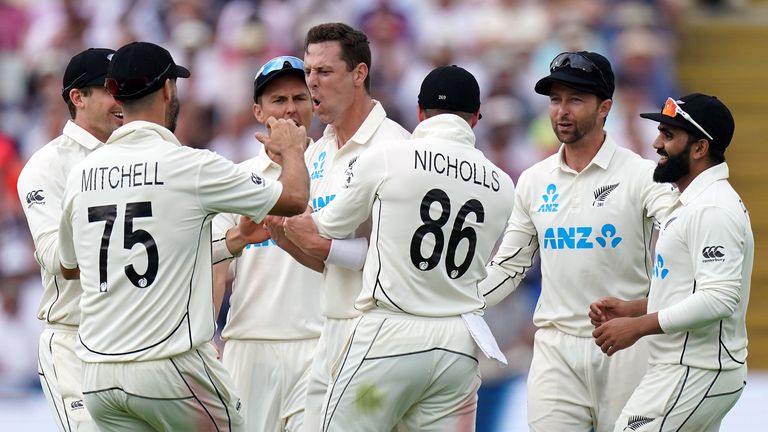 Joe Root (4), given a rapturous reception by the Edgbaston crowd, was the third to go as Henry again found a nagging line just outside off, forcing the England captain to play and finding the edge thanks to a hint of movement away from the right-hander.

That was the prized scalp and New Zealand celebrated accordingly but, with Burns joined by Ollie Pope, the home side were able to regroup.

Burns went to his ninth Test half-century from 141 balls but just as Pope (19) appeared to be set, he was gone, chasing after a short, wide delivery from left-arm spinner Ajaz Patel and nicking behind to his own obvious disgust.

The rebuilding process began again with Burns and Lawrence, who survived an lbw review before he got off the mark, and the former gave the boisterous home crowd something to cheer, showing a bit of flair as he slapped Wagner through the covers for four shortly before tea. 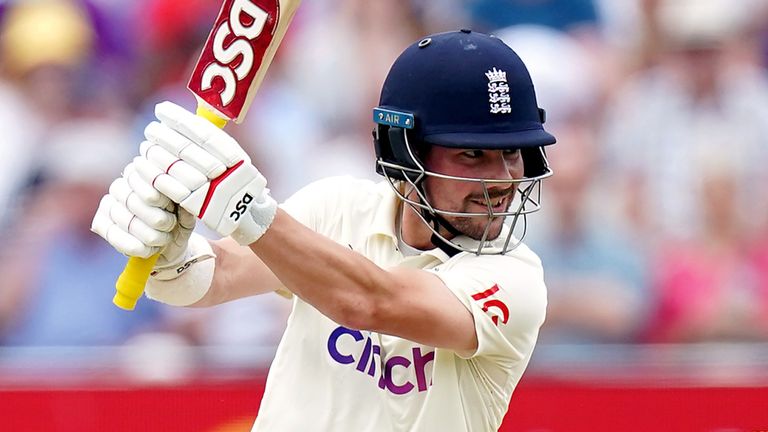 Once again, though, the Black Caps came out firing after a break with Boult striking in the third over after tea to remove Burns just as another hundred was coming into view, late swing enabling the left-armer to find the outside edge and stand-in skipper Tom Latham took a good, low catch at second slip.

Boult got his second wicket with the first ball of his next over, James Bracey gone for a golden duck as he was caught at third slip attempting a booming drive – meaning the left-hander is still without a Test run to his name after two innings – to expose a lengthy England tail with just 175 on the board. 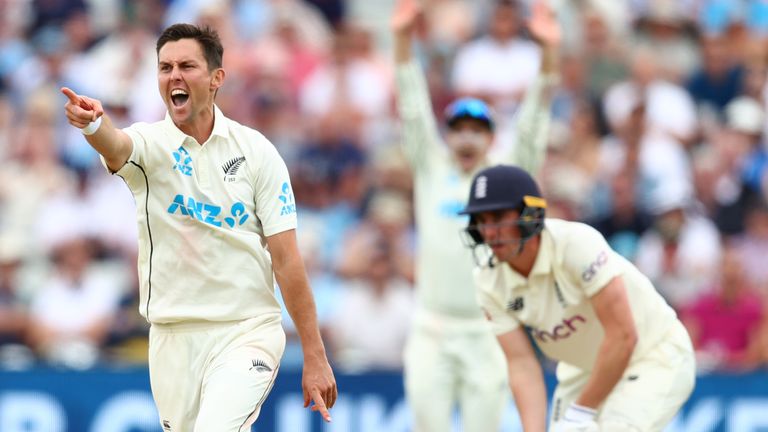 However, after a number of loose shots from the top and middle-order, the lower-order dug in and Stone proved himself a more-than-able deputy to Lawrence, who was looking increasingly assured at the crease.

A pair of boundaries from Stone took England past 200 and when Lawrence crunched two drives to the fence in the first over after drinks, the partnership was 47.

That was as far as it got, though, as Patel had Stone (20) lbw on the sweep, a decision confirmed on review, but there was more frustration for New Zealand as Wood picked up where Stone had left off.

Even the second new ball could not break the stand with an overturned caught behind decision against Wood the closest the visitors came to a breakthrough.

Lawrence was starting to enjoy himself, nailing a couple more gorgeous drives to the boundary off Boult, and even Wood got in on the act with a well-timed on-drive off Henry racing away to bring yet more cheers from the fans in the early evening sunshine.

Watch day two of the second Test between England and New Zealand from 10.15am, Friday on Sky Sports Cricket.

Doubling Down With The Derricos: How Much Is The Derrico Family Worth?