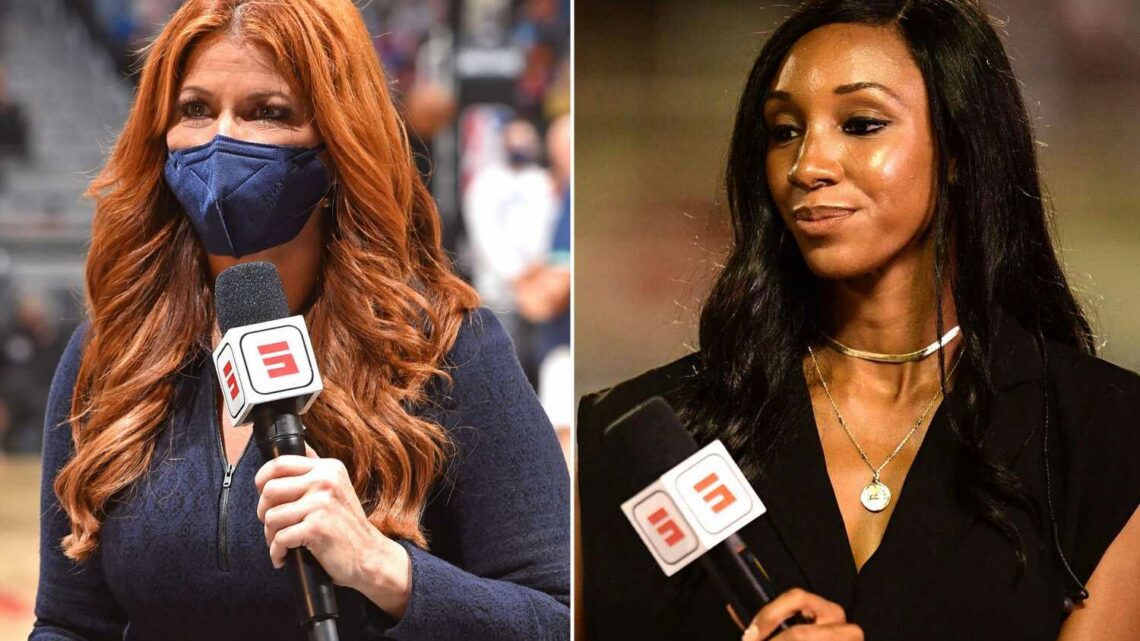 ESPN, Rachel Nichols and Maria Taylor all look bad in this drama

Could Amazon be the one to finally land Peyton Manning as an NFL analyst?

It is hard to figure out who looks the worst in the whole ESPN-Rachel Nichols-Maria Taylor drama, but let’s give it a whirl.

It starts with ESPN management. The Nichols comments — taped illegally or not — were known for a year throughout the top executive ranks. It was an open wound.

Instead of actually addressing it, they let it linger, trying passive-aggressive Band-Aids until now, after a New York Times story.

The result is Nichols’ ESPN career is in jeopardy and Taylor may follow her out the door.

Even on Tuesday, there was no show of strength from ESPN. First, ESPN took Nichols off the NBA Finals sideline, while initially saying that Nichols would continue to host “The Jump,” her weekday program. Then, “The Jump” did not air. ESPN says it will give “The Jump” a try on Wednesday.

Oh, this is all while a little thing called the NBA Finals is going on.

Nichols, 47, is known as hard-working, political and territorial. These are not uncommon traits at the top of sports TV.

She rose on TV as a sideline reporter, developing strong enough relationships with star players so they all stopped for postgame interviews, which is the main skill for the position.

On Nichols’ daily show, “The Jump,” she had created a well-received meeting place for the NBA. A former newspaper writer, she has now become sort of a part of the league, as much as covering it.

While it is easy to pile on her, she did have a signed contract that said she was the host of the NBA Finals before it was yanked away without much of a reason.

Her private conversation emanated from Florida and was recorded in Connecticut. Both states have two-party consent laws, meaning anyone on a phone line must agree to being taped.

And, while what she said was demeaning, insensitive and hypocritical, her comments seem more like a misdemeanor than a felony.

But ESPN management did her no favors by allowing a wound to become infected, failing to act in any significant way, except appeasing Taylor’s request to not have them appear together on-air. By doing so, ESPN let others control the narrative — and now has completely lost any semblance of it.

While Nichols and Taylor have been rivals, they aren’t that different. Taylor is the superior host, smoother and more polished. But Taylor has proven adroit at working angles, too, to borrow a phrase, in the “snake pit” that is the corporate ESPN.

In her seven years at ESPN, Taylor has been relentlessly promoted. Taylor, 34, has risen to be the college football national championship sideline reporter, the host of the NCAA Women’s Tournament and NBA Finals. She makes $1 million a year, but, as The Post reported last week, her contract is up on July 20 and she hopes to land in the “Stephen A. Smith” neighborhood of $8 million a year. ESPN at one point had a deal that would eventually reach close to $5 million on the table.

NBC could have interest in her to replace Mike Tirico next year as the host of “Football Night in America.” Amazon also likes her work.

Maybe Taylor owes Nichols nothing, but she could have put out this fire, if she had wanted to, as well. Over the past several days, Nichols has publicly said she has tried to talk to Taylor, but Taylor has decided against dialogue.

ESPN’s leaders were too weak to force them into a room and hash it all out as adults. A mistake they all should regret.

“If you need to give her more things to do because you are feeling pressure about your crappy longtime record on diversity — which, by the way, I know personally from the female side of it — like, go for it. Just find it somewhere else. You are not going to find it from me or taking my thing away,” Nichols said on the recording The Times was given.

Now, Taylor’s contract is up. She and ESPN have not seen eye-to-eye on the numbers.

ESPN decided to take Nichols’ sideline job away. They already took back her hosting role. The whole mismanagement has put in question whether she will be able to cover the league she loves.

The soap opera has sports media and beyond gawking, it is unsurprising and preventable. From management to Nichols to Taylor, they all could have stopped this out-of-control spiral.

Tyler, the Creator Dominates Charts with 13 Singles on the Billboard Global 200

Nathan Kress Gave Us the Download on iCarly, Directing, and Why the Cast Love Bo Burnham
Recent Posts