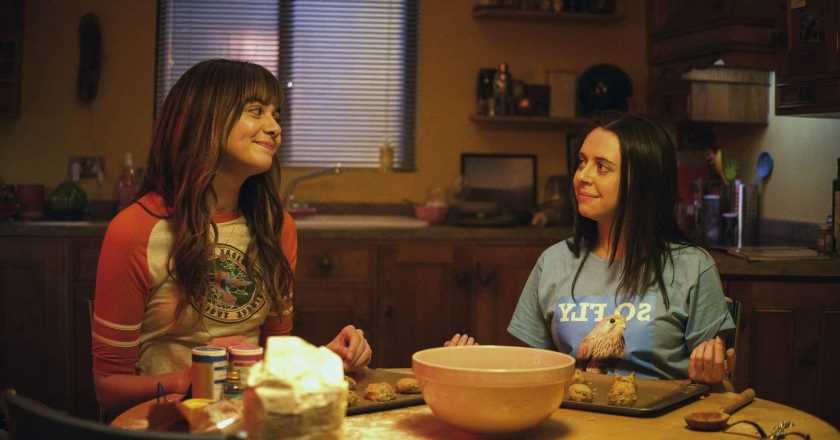 Friendship breakups are never easy but they get trickier when a romantic relationship is the cause of them – something that is well-documented in BBC’s Everything I Know About Love.

Warning: this article contains spoilers for BBC’s Everything I Know About Love.

Pretty early on in BBC’s Everything I Know About Love, you know when the friendship dynamic between Birdy and Maggie changes.

It comes in the first episode when Maggie stumbles into Birdy’s room to find her in bed with Nathan. Maggie wants all the details but Birdy is (naturally) more distracted and wants to get back to her date.

“Breakfast?” Maggie asks excitedly, to which Birdy gushes: “We’re actually going to brunch tomorrow, I think. Yeah, this place by the canal he wants to take me to. Apparently, they do a really, really good Bloody Mary.”

Birdy (Bel Powley) and Maggie (Emma Appleton) in BBC’s Everything I Know About Love.

When Maggie asks if they should just do a movie night the next evening, Birdy nods and says “sure” but it’s in the way of wanting the conversation to end, rather than meaning it. And then, in the second episode, no sooner have the girls mastered part of the dance routine they’re learning, the doorbell goes. It’s Nathan.

It’s clear the girls (all workout gear-clad and sweaty) weren’t informed he was coming round but Birdy, of course, did. The awkward tension is enough to make you squirm but for me – and likely, many women who watch the Dolly Alderton series – it was an all too familiar scene. These small instances of literally choosing a new relationship over a friendship are what rung out to me because, like Maggie, I once lived with a best friend who I wouldn’t go a day without spending time with.

We moved in together with all the excitement you have in your early twenties, prepared for nights of endless fun, quality time and wine, all just being a hallway apart. We had that, even when both in previous relationships but quickly, with the introduction of a new partner, my friend’s time became more and more preoccupied with domestic bliss.

Birdy and Nathan’s relationship signals the end of her friendship with Maggie, something many can relate to.

Instead of binge-watching episodes of reality TV with our housemates, her boyfriend would pop round mid-episode, refusing to make anything but small talk. The painfully awkward scene between Maggie and Nathan? I’ve unfortunately had to live that – making excuses to retire to your room or go out, just because the alternative makes time tick by slower than humanly possible.

Suddenly thoughts of nights out clubbing and bar-hopping are replaced with wanting to cook dinner at his, something Birdy is guilty of in the series. Like my own experience, Birdy was once the lively party person, always there for her friends and managed to remain the voice of reason in the friendship group.

That’s why – when you expect mature, level-headed behaviour – it can be confusing when someone abandons their friendships for a new romance.

We’re all guilty of being swept up in love and I’m not saying that’s a bad thing. What can be, though – and never bodes well for creating healthy relationship patterns – is devoting all of your time to one person. Where once Birdy and my friend’s lives were jampacked full of plans, different people and places, they’re soon replaced by one person, creating a toxic ideal of shirking one’s own life for someone else’s.

Bel Powley and Ryan Bown as Birdy and boyfriend Nathan in BBC’s Everything I Know About Love.

When I first tuned into Everything I Know About Love, I wasn’t expecting to see one of the more emotional parts of my life played out on the small screen but the series surprised me. Birdy and Maggie’s friendship is what every woman hopes to experience at least once in their lifetime – it’s unconditional, loving, carefree and fun. Trust me, though, it’s also the kind of friendship that hurts the most when you lose it.

As the series goes on and you see Birdy drift away from the group, you see Maggie forced to realign the image of her best friend with the new reality. They float around the house like strangers, knock on each other’s doors with polite introductions when once, they used to share beds and walk in unannounced. Living with your best friend should be the stuff of dreams and nobody goes into it thinking you’d ever leave no longer speaking – but unfortunately, it can be a sad fact of life.

The Dolly Alderton series is available to stream on BBC iPlayer.

As the last episode highlights, you may have years of strong friendship to look back on but sometimes there are bonds that just end in quiet disappointment. There’s no big falling out, there’s no major screaming match or fight. Instead, as is the case of the series and my own life, it’s messaging them on the last day of your lease to say goodbye and maybe never speaking again.

You’d think that after years of withstanding life’s host of problems together, a new romantic relationship wouldn’t be the undoing of a strong friendship. But for some, having to juggle both can be a balancing act they don’t want to do at that stage in their life.

While the series was an unexpected reminder of a friendship breakup – and a painfully realistic one at that – its last episode also perfectly sums up the way these things unfold. You may feel left behind but your life moves on and you carry on, just maybe without the sisterly bond you thought would always be there.

Everything I Know About Love is available to stream on BBC iPlayer now.