Home » Lifestyle » Finn Tapp’s home: Inside the Love Island winner’s stylish pad with his own bar 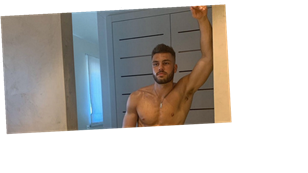 Finn Tapp’s home: Inside the Love Island winner’s stylish pad with his own bar

Whilst Finley Tapp might have been living it up in the Love Island villa, scooping up the £50,000 cash prize with fellow winner Paige Turley, it seems the 20-year-old is living it up at his home back in the UK too.

The semi pro footballer, who also worked as a recruitment consultant before finding fame in Mallorca, lives in a super sexy home which boasts some of the finest decor around. Suffice to say, it’s quite the pad!

Finn has built up a whopping 1.3 million followers since bursting into our lives on Love Island, but taking a little scroll back before his time on the show sees photos of Finn posing in his stunning home.

In another image the hunk poses in what appears to be his very own Kim Kardashian-esque bathroom, which shows off a minimalist vibe.

The star can also be seen chilling on a super-soft looking sofa, Champagne in hand, and we’re loving the neutral palette which reigns throughout.

The exception being, however, the 20-year-old’s in-home bar – yes, you heard right – which pops with colour.

Shaking things up in his home, Finn has popped a neon pink bar up, laden with spirits and alcohol galore. In the shot, Finn poses against a backdrop where a statement picture sits, in which ladies with tattoos and high heels pose.

What are the Love Island 2020 stars' real jobs, from a coffee bean salesman to a beauty consultant?

The makeshift bar makes for the centrepiece in the Love Island winner’s home.

The star and his Love Island girlfriend, Paige Turley, have shared many a loved-up snap since their villa departure.

Recently, the couple, who were crowned as the winners of the ITV dating show, headed out to enjoy their first London-based date night at celebrity hotspot Hakkasan.

The Love Island 2020 winners looked all loved-up as they posed outside the restaurant for a cosy picture with Paige looking gorgeous in an all-white outfit, while Finn donned a pair of black jeans and a white t-shirt.

Paige, 22, gushed about her evening with her boyfriend Finn and even teased her fans about the special date 29 February, as it is often tradition on a Leap Year that a woman proposes.

"First date night in London!! You know what they say about the 29th of Feb," Paige wrote alongside a kissing emoji.

Meanwhile Finn posted a snap of his other half at dinner, who wore a stunning corset style-white dress and matching stiletto heels, writing simply underneath: "Unreal."

The couple have been enjoying their big win since touching back down in London after they were declared the winners of the first winter Love Island series.