A senior official involved with robo-debt has admitted the unlawful welfare recovery scheme was underpinned by flawed assumptions.

Elizabeth Bundy, who ran the human services department’s internal reviews for welfare payments in 2017, agreed at the robo-debt royal commission on Tuesday that using the controversial practice of income averaging to calculate Centrelink debts could result in inaccurate figures. 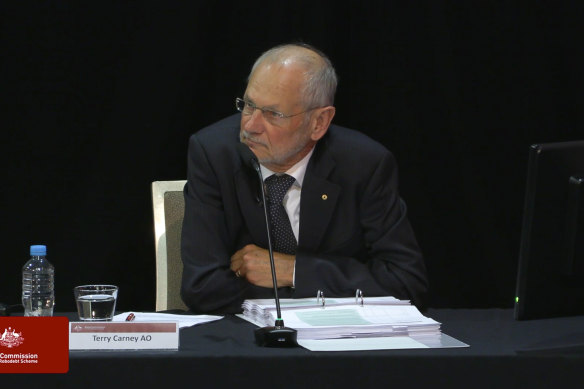 Terry Carney, who worked at the administrative tribunal for almost 40 years, repeatedly ruled the robo-debts could not be legally enforced.Credit:AAP

But within the department, there was a view that Tax Office data could be relied upon when employers could not be contacted.

The royal commission is investigating how individuals’ annual tax information was used to determine average fortnightly earnings and automatically establish welfare debts, an approach ruled unlawful by the Federal Court in 2019.

The system wrongly recovered more than $750 million from 381,000 people and led to several people taking their lives while being pursued for false debts.

“Whether or not it was top of your mind, you surely knew in 2017 … whether or not there is a basis for an administrative decision was lawful was if there was evidence to support it,” he said.

“The answer, Ms Bundy, is there was no evidence was there?”

Bundy replied: “In hindsight … it was a flawed assumption.”

The public servant was quizzed on her department’s decision not to appeal any Administrative Appeals Tribunal rulings that wiped robo-debts on the basis the notices lacked supporting evidence.

She agreed the department would have had to appeal those decisions if it disagreed.

The commission was shown an email sent by one of Bundy’s colleagues, which said they would be concerned if Human Services did not appeal a “zero-debt” decision.

“If they don’t it will open up Pandora’s box,” the colleague said.

Terry Carney, who worked at the administrative tribunal for almost 40 years, repeatedly ruled the robo-debts could not be legally enforced.

He found it was not the responsibility of welfare recipients to provide pay-slip data or risk being hit with a debt.

He found the practice of averaging income lacked “sufficient strength of evidence” and “simple mathematics”.

“From the very early stages, I read the budget papers and saw what was proposed – all sorts of alarm bells went off in my mind,” Carney said.

“The legal foundation was completely missing.”

Carney said it was common throughout his lengthy tenure that the Department of Human Services rapidly appealed decisions where a major government policy was at stake.

But the department never appealed any ruling that found a robo-debt was not legally enforceable.

The robo-debt program was eventually abolished in 2019.