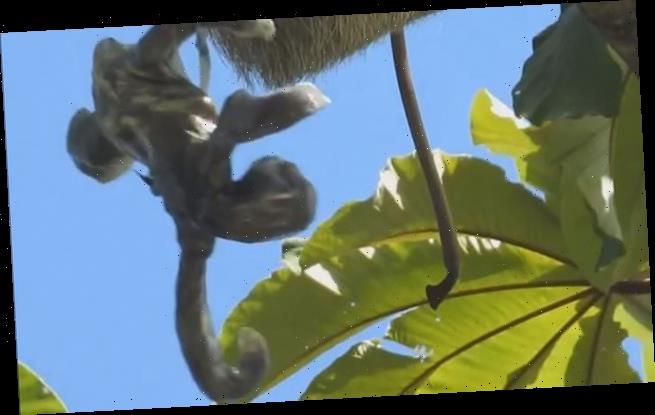 Incredible video footage shows the heart-wrenching moment a sloth is born and dramatically dangles in the air from its mother via its umbilical cord.

The three toed sloth mother gave birth to her offspring while hanging from a tree in Costa Rica, resulting in the youngling plummeting towards the ground.

But the attached umbilical cord of the freshly-born sloth stops it from falling to Earth, and the mother swiftly scoops up her baby hanging below her.

a three toed sloth having a baby in the wild is something that you don’t see every day Un perezoso de 3 dedos teniendo un bebé es algo que no se ve todos los días ???? 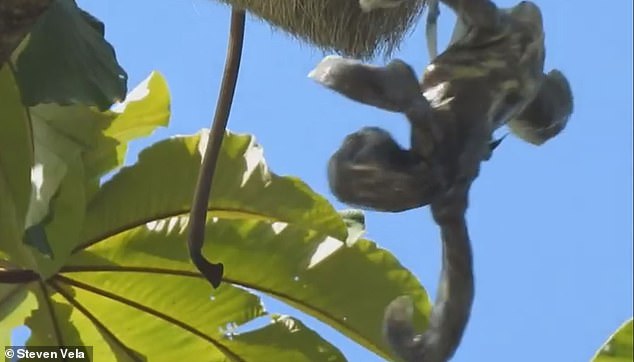 Steven Vela, a guide with the company Canoa Aventura in the South American country posted the remarkable video on his Facebook page revealing the baby sloth dangling precariously from his mother

WHAT ARE THREE-TOED SLOTHS?

The three-toed sloth is the world’s slowest mammal.

It is so sluggish that algae survives and flourishes in its fur.

This provides a green tint to the animal;s colouration and helps it camouflage in the trees and foliage. .

There are both two-toed and three-toed sloths and their long claws make them easily identifiable.

Sloths mate and give birth while hanging in the trees.

They spend nearly all of their time in the trees and have been known to cling on to branches even after death with their powerful claws.

Sloths sleep in trees for up to 20 hours a day.

At night they eat leaves, shoots, and fruit from the trees and get almost all of their water from plants.

Steven Vela, a tour guide working for the company Canoa Aventura in the South American country, posted the remarkable video on his Facebook page.

He said: ‘A three toed sloth having a baby in the wild is something that you don’t see every day.’

In a message to National Geographic, he said: ‘That was something amazing.

‘I think I will die and I will never see something like that [again].’

The Costa Rican tour guide, who has been doing the job since 2013, said both mother and baby are in the same area and are doing well despite the scary incident.

The video has since racked up more than one million views, and experts have weighed in on the astonishing footage.

Dr Rebecca Cliffe, the founder of the Sloth Conservation Foundation in Costa Rica, told CNN that observing a sloth give birth in the wild is a rare privilege afforded to a fortunate few.

Dr Cliffe said: ‘To see a three-fingered sloth give birth is something that very few people have been lucky enough to witness.

‘Sloths are secretive animals that live high in the rainforest canopy and specialise in camouflage.

‘To just see one in the wild is lucky, but to observe one giving birth out in the open is very special.’

Dr Cliffe says she once observed a similar birth back in 2013.

‘The baby fell and the umbilical cord got tangled around a vine which made everything a little bit chaotic,’ she told CNN.

‘Thankfully the baby didn’t fall, but it was another example of the umbilical cord saving the day!’

The Bachelor's Tammy Ly Addresses 'Negative Noise' After Women Tell All: 'I'm Not a Bully'