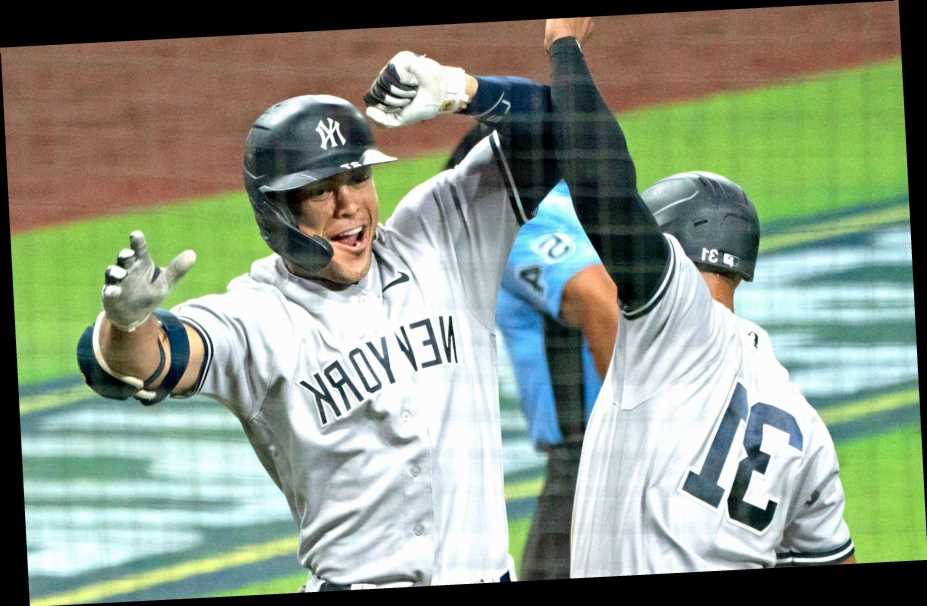 SAN DIEGO — Put your pinstriped allegiances or antipathies aside for a moment. If you like tantalizing, transcendent baseball, you don’t want the Yankees to go home anytime soon.

Because you want to see what Giancarlo Stanton will do next.

This American League Division Series now stands as even, yet don’t blame Stanton, the Yankees’ megabucks slugger who finally is living up to the hype that accompanied him to The Bronx nearly three years ago. As the Yankees fell to the Rays in Game 2, 7-5, a risky pitching strategy turning on them like a bad sausage, Stanton put on a power show for the ages, homering twice and driving in four at Petco Park to enhance what already had been a breakout postseason.

In the process, the designated hitter made a seer out of a spiritual ancestor, another huge name earning huge dollars who wore a huge cloud over his head before changing his October narrative in a dynamic way.

As Alex Rodriguez told The Post, in a story published Sept. 28, Stanton was “set up beautifully here in this postseason.”

A thing of beauty took flight Tuesday in the fourth inning, with the Yankees trailing 5-1: Stanton, having already pounced on Tyler Glasnow’s second-inning curveball and drilled it over the right-field wall to tie the score (temporarily) at 1-1, got hold of a Glasnow 97 mph fastball and sent it for the ride of a lifetime: At an exit velocity of 118.3 mph, the three-run blast became the hardest-hit postseason homer in the Statcast era (since 2015). Traveling an estimated 458 feet, over the second deck in left field, it marked the sixth-longest round-tripper from that same span.

“You kind of black out on those,” said Stanton, who politely indicated that he thought the estimation to be short.

“I thought it was going to hit the scoreboard, where that was going,” said Aaron Boone, who also marveled at how the first homer resulted from “a letter-high curveball hit to the right of straightaway (right field) on a line. … It’s one of those swings only Giancarlo produces.”

That one elevated Stanton to some rare company and carved out some exclusive space for himself: He followed Hall of Famers Lou Gehrig and Reggie Jackson as the third Yankee to go deep in four consecutive games. Except that Gehrig (1928-32) and Jackson (1977-78) put together their streaks over multiple postseasons; Stanton stands as the first Yankee to do it in one year. The fourth-inning moonshot put him aside Juan Gonzalez (1996) as the only two players to leave the park five times in the first four games of a postseason.

“Yeah, that’s pretty cool,” Stanton said upon being informed of his record-book-joining, “but that’s stuff you look at after.”

Stanton finished his night by striking out, one of the Yankees’ postseason-record 18 Ks on the night, and lining out very hard (110.8 mph) to Rays left fielder Randy Arozarena, giving him a postseason slash line of .333/.421/1.333.

Who coulda thunk it after Stanton’s first two Yankees playoff runs featured poor hitting (the 2018 ALDS against the Red Sox) and poor health (last year’s ALCS against the Astros)? A-Rod, that’s who. The ESPN and FOX broadcaster offered three reasons why he thought Stanton could be the Yankees’ most valuable player this month. The first, that Stanton would be returning to his Southern California roots if he and the Yankees could get through the Indians in Cleveland, already has been confirmed by Stanton. The second reason was no fans, besides family (including Stanton’s parents), in the ballpark. And finally, “He really has nothing to lose,” A-Rod opined. “The year has been a wash because of injuries. He has the opportunity to have one big moment, and he can be a hero forever.”

He has produced a few big moments already, if nothing quite on the scale of A-Rod tying two 2009 playoff games with homers in the Yankees’ last at-bats.

“It’s really good to see him continuing to have these kinds of at-bats,” Boone said. “I’m looking forward to seeing him go out there and continue it [Wednesday].” The manager should make sure he and his other players do nothing to prompt an early cancellation of The Giancarlo Show.