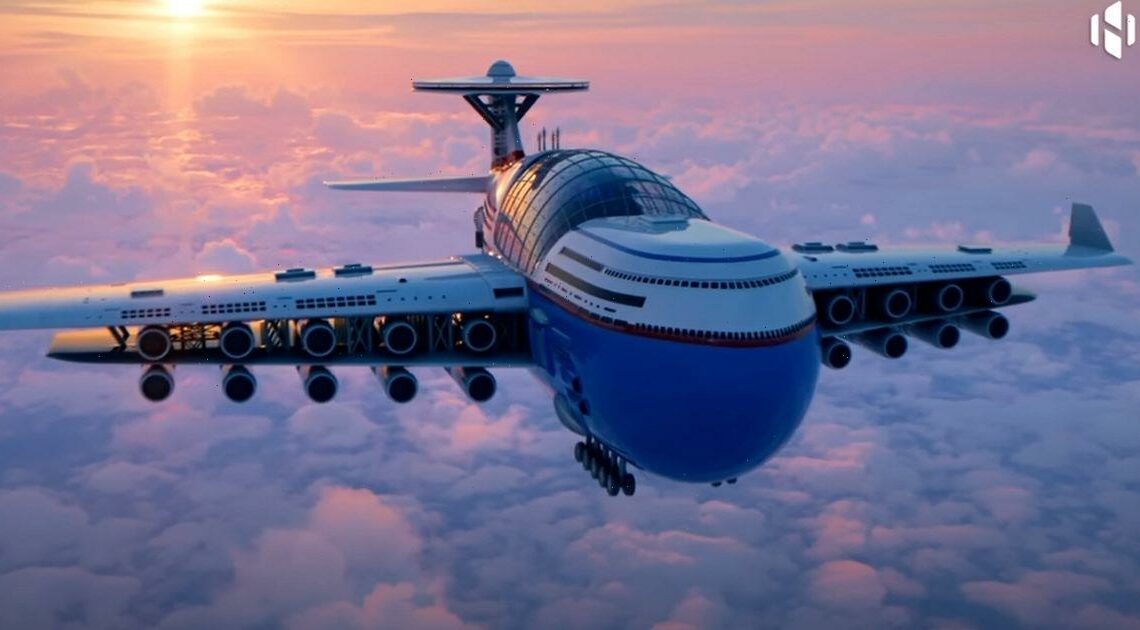 A wildly ambitious design for a “flying hotel” that could carry 5,000 passengers in unparalleled luxury has been featured in a new video.

The AI-piloted Sky Cruise – which has 20 engines powered by nuclear fusion – is designed never to land.

Instead, conventional airliners would ferry passengers to and from the Sky Cruise and even all running repairs would be carried out in-flight.

READ MORE: Mind-blowing holidays of the future – from underwater hotels to a weekend on the Moon

Hashem Alghaili, who created the incredibly detailed mockup of the monster aircraft, says the nuclear-powered sky cruise “could be the future of transport”.

Asked how many people it would take to fly the gigantic aircraft, he says “All this technology and you still want pilots? I believe it will be fully autonomous”.

But Sky Cruise will still require plenty of staff.

The promotional video promises restaurants and a giant shopping mall in the sky, as well as gyms, theatres, and even a swimming pool.

In the video, the giant flying machine is also suggested as the perfect wedding venue.

However, not everyone agrees with some commenters describing the Sky Cruise concept as the “new Titanic.,” pointing out that having lifts on the outside of the aircraft would be far from aerodynamic and that if an aircraft powered by a nuclear reactor crashed, it could destroy a city.

One nervous passenger: “Great idea putting a nuclear reactor in something that could malfunction and fall out of the sky.”

While someone else commented “I’m sure I would be able to afford a ticket for the lowest deck with no leg space and no access to the lounge”.

With the massive development costs involved, some predicted that a trip Sky Cruise would cost a fortune.

Stay up to date with all the latest Daily Star news by signing up to one of our free newsletters here.

A financially-savvy YouTube commenter chipped in: “While this is interesting concept and its is capable to built it with current technology, this thing would be super expensive and no doubt only rich would be able to book this hotel”.

The fusion technology envisaged to power Sky Cruise is still far in the future, but even if an aircraft like this is one day built, there are some things that never change.

As one commenter pointed out: “I bet I still end up next to someone else's screaming three year old for the entire trip”.

Prince Albert caught Covid for the third time since March 2020