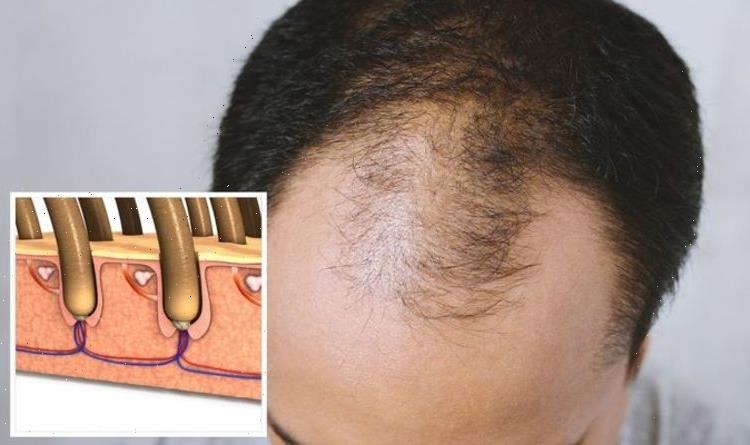 Nioxin speak to women about their experiences with hair loss

Stem cells are the body’s raw materials from which different cells with special functions are generated. Under the right conditions, they divide to form more cells in the body. The new study found a previously unknown mechanism by which stem cells influence follicle health.

The evidence published in the journal Nature Aging shows how these cells can lose their stickiness and become dislodged from hair follicles in ageing mice.

The study also identified genes that could reverse the process.

The scientists used live mice as a model for balding in ageing humans.

READ MORE: Pancreatic cancer: The ‘difficult’ warning sign immediately after having a poo

This enabled the researchers to observe their activity during ageing by using a laser.

They were able to see the whole degradation process when watching the same hair follicles over many days.

Previously, it was thought that stem cells remain lodged within hair follicles.

However, the study shows that some of them are actually escaping.

The scientists suggest that this is happening due to the stem cells losing their stickiness that would otherwise hold them in place.

Losing stickiness enables them to escape into the dermis, a layer of the skin.

In the dermis, most of the stem cells don’t survive due to the conditions.

The scientists then went to investigate the gene expression levels within the follicle stem cells in young and older mice to understand why this is happening.

They found that levels were in fact lower in older mice.

This allowed the scientists to be able to pinpoint genes integral to the process – FOXC1 and NFATC1.

Knocking out these genes in the mice brought rapid hair loss.

The hair loss would begin at four months of age with the mice becoming completely bald within 12 to 16 months.

The researchers are now looking into how the FOXC1 and NFATC1 genes might be able to reverse the process.

Hair follicles were previously known to diminish as part of the ageing process.

The reason behind this was suspected to be the result of cells simply dying or not being able to divide properly.

But this study about the escape mechanism adds new information into knowledge around ageing and hair.

Travis Barker or Scott Disick: Which of Kourtney Kardashian's Partners Has the Higher Net Worth?