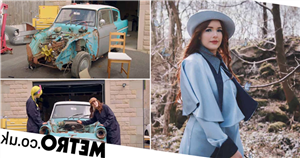 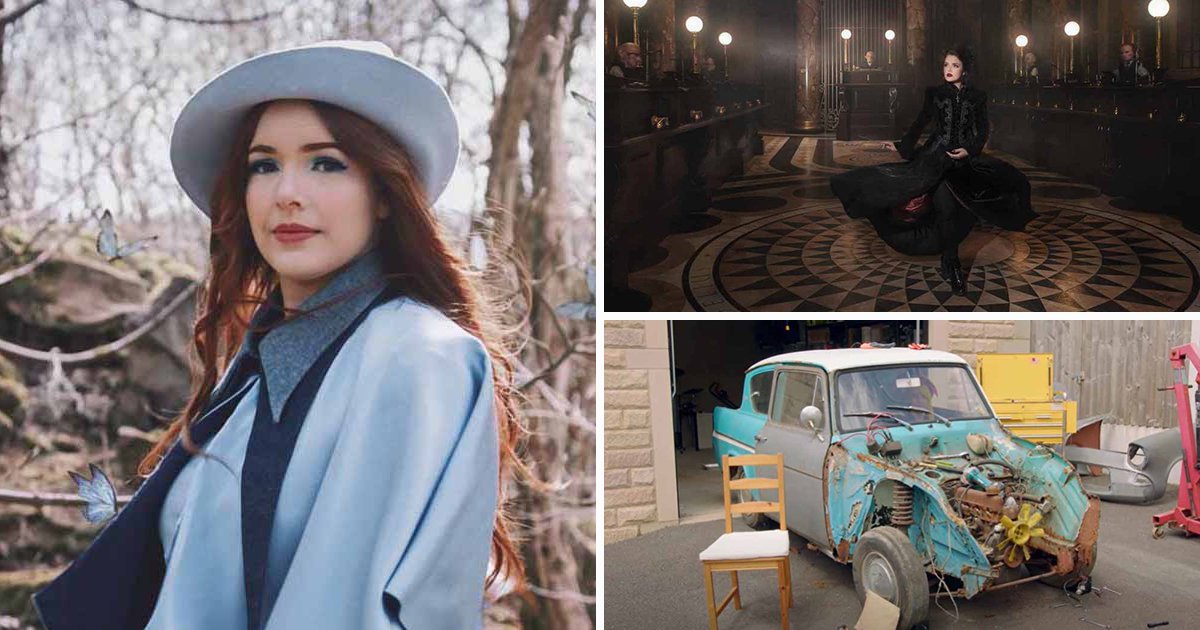 A Harry Potter obsessive plans to transform a crumbling Ford Anglia to look just like the car that first appeared in the Chamber of Secrets film.

31-year old Cherry Wallis says she is enjoying the special project, which she is working on with three friends in her garage.

‘It’s a very old car from the 1960s. It’s the same colour as the one from the Chamber of Secrets – blue,’ says the full-time YouTuber from Derbyshire .

‘I know nothing about engineering or mechanics, but we’ve stripped it down and are getting the body work done.

‘It’s currently a bit of a rust bucket, but the plan is to restore it back to its former glory.

‘We even want to put an invisibility booster button in it. I wouldn’t have it if it wasn’t for my love of Harry Potter!’

Cherry – who has 700,000 YouTube subscribers – says her huge social media following came after she started posting videos about the famous wizard.

Aged just 11 when the first movie came out, she was not always a Harry Potter fan.

In fact, Cherry had no interest in the wizarding world until her late teens when she picked up one of her older brother’s books.

Plunging into the magical world of fantastic beasts, witches and wizards, Cherry fell in love with Hogwarts School of Witchcraft and Wizardry.

‘It was all about the escapism,’ she says.

‘When you’re feeling sad, or down, it’s a little bit of escapism to somewhere nice and magical. And I think that’s what Harry Potter is for a lot of us.

When she shared her love for the wizarding franchise on her YouTube channel in 2016, her world was turned upside down by the incredible fan community.

‘When I got sent a replica of Newt Scamander’s suitcase for Fantastic Beasts and Where to Find Them, I posted it on my YouTube Channel, it just blew up,’ she adds.

Now she is living the dream, making videos of herself dressed up and cosplaying as students and characters from the wizarding world.

She has transformed herself into Hogwarts students, as well as Beauxbaton students, a rival school in Harry Potter and the Goblet of Fire.

But her favourite character is Luna Lovegood – who first appeared in the Goblet of Fire series and is celebrated by fans for her quirky and unique personality.

‘I feel as though that was perhaps me in school, so I related to that a lot. I like how different she is and she’s unapologetic about being herself. I think that’s a really strong message,’ says Cherry.

As another bonus, Cherry receives all kinds of Harry Potter goodies, which she shows fans on her site.

She said: ‘I’ve lost count of how much merchandise there is. I actually have a sign on my office door that says “The Room of Requirement” on it,’ she says.

‘My favourite item is the Ravenclaw lost diadem, a jewelled headpiece made by noble collection. It’s just stunning. It’s one of the prettiest pieces in my collection.’

Visiting the Warner Brothers Harry Potter Studios in London is another work bonus for Cherry.

She says: ‘I’ve been more than 30 times. I call it my second home because I go there so much.’

Maybe next time she goes she’ll be able to avoid the traffic in her flying Ford.