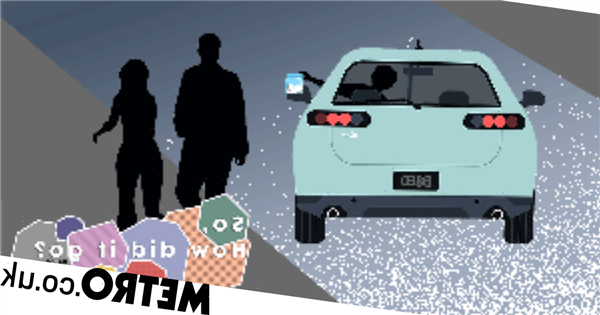 I was just finishing up my job as a cashier at a fast food outlet when Doug* caught my eye.

He had a rugby-looking physique, a smile that lit up the room and a twinkle in his eye that had just the right amount of mischief in it for me to reply favourably to his pick up line.

He noticed I was wearing my work uniform and cheekily asked, ‘do you come here often?’

As I left work, we walked out of the shopping mall together – along with two of his friends, who I later found out were brothers – and he noticed I was headed for the bus, while they were on their way to the car park.

There was a sense of comfort between Doug and I that led to me agreeing (rather courageously) to accept their offer of a lift in their car home, rather than having to take public transport.

We chatted non-stop on the trip and exchanged phone numbers.

I waited the obligatory three days before taking matters into my own hands – calling the digits Doug had provided.

The phone was answered by one of the brothers that had been in the car with us called Luke*, who said he would arrange for Doug to call me back.

A few hours later, he rang and, rather coyly, we set up a date at a popular bar in the area.

Everyone kept falling asleep and I didn’t understand why

He was casual but confident, turning up to the date in jeans and a tee, which fit snugly across his chest. It showed off his biceps and I smiled when I noticed his dress shoes, rather than sneakers.

You could tell he had made an effort for the date, but was playing it cool also. I was swept off my feet by the combination of shy but strong personality traits he had.

As far as the date itself went, we hit it off.

There were no awkward silences, it was as though our conversation was a song with the perfect tempo, tune and lyrics. We talked about the type of music we liked, where we wanted to travel, what movies we had seen lately, our favourite actors and actresses – the usual get-to-know-you type of things.

We had a fantastic meal, a few drinks and he even bought me a single rose that was being sold at the bar, and he paid for everything.

Doug told me he had been injured at work and was being compensated as a result so would be returning to work once his neck and back had healed fully. We finished up at the bar and walked the streets hand in hand as we talked some more.

As the night drew to a close, Doug shyly asked how I would feel if we went back to Luke’s house for a coffee, which it turned out was where Doug spent a lot of his time.

Not wanting the date to end, I agreed, but on the promise that he would drive me home afterwards because it was getting too late for public transport, and he agreed.

I felt completely out of my comfort zone

Before we went into the house, Doug took a deep breath and asked me if I was ready. He told me almost apologetically that he didn’t know what to expect.

When we entered the house, Luke was dozing on the couch, while his wife, Natasha* was cleaning up and chasing after their nine-month-old son, who I was surprised to see was still up and screaming, despite it being close to midnight.

I immediately felt uncomfortable and had a strong desire to leave, but thought it was impolite to say so.

Natasha kept nodding off midway through cleaning the house, which I put down to being tired. The baby was crawling on the floor, playing with a needle cap; I assumed it was due to one of the household members being diabetic.

I didn’t ask any questions about it at the time though.

Doug tried to snap Natasha out of her constant desire to fall asleep and not long after we arrived, Luke’s brother Leo* and his mother Sheila* rocked up.

Leo and Doug talked to one another in a separate room, while Sheila tended to her grandson’s needs, taking over from Natasha who had fallen asleep. Doug and Leo returned to the living room, but our conversation was short-lived, both of them nodding off to sleep too.

With nowhere to go and not enough cash on me to cover a taxi ride home, I found a quiet corner and turned in for the night also. I felt completely out of my comfort zone and extremely disappointed that this was the end to what had been a perfect date.

Midway through the night, I was shaken awake by Luke and guided to a spare bedroom, where I was invited to sleep on the bed. The following morning, I woke to Doug apologising for the terrible date night and giving me a lift back home.

I remember remarking to him how tired everyone seemed to be, but he didn’t offer any sort of alternate explanation.

Despite the weird encounter, we agreed to catch up again as I’d enjoyed the initial part of the date. Unfortunately, before we could, I received a phone call from Luke to tell me that Doug had been arrested.

When I asked why, I found out that Doug had been out on parole for a long list of offences associated with a heroin addiction.

Due to Doug breaking his parole requirements, he was sentenced to jail.

I found this out because I actually ended up going to Doug’s court hearing, where they spoke about his addiction. I was shocked that a guy who appeared to be so together could have a drug problem.

He contacted me a few times from the prison, but we no longer keep in touch, as I have now moved on.

Facebook tells me that he has been in and out of jail ever since and that Leo and his nephew are sadly no longer with us, passing away within months of each other.

I don’t regret the date, as I learnt a lot about drug addiction as a result.

I feel a lot of sadness though because I believe Doug has a a lot to offer, but has a sickness that he hasn’t been able to overcome. Sadly, it has impacted many lives.

*Names have been changed.

So, How Did It Go? is a weekly Metro.co.uk series that will make you cringe with second-hand embarrassment or ooze with jealousy as people share their worst and best date stories.

Want to spill the beans about your own awkward encounter or love story? Contact jess.austin@metro.co.uk