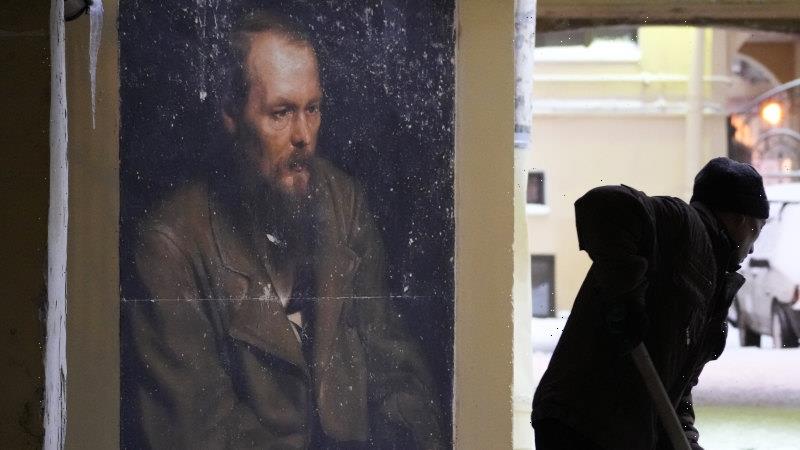 On a freezing morning in December 1849, a group of prisoners was taken to a Moscow square and lined up in front of a firing squad. The drums rolled and the soldiers took aim. Then a messenger rode into the square with a last-minute pardon from the Tsar.

The execution was staged, a form of psychological torture. Two of the prisoners went mad. A third became one of the world’s greatest novelists and thinkers. 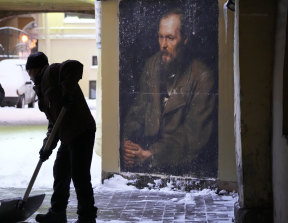 A worker clears snow from a portrait of Fyodor Dostoevsky on a wall near the apartment-museum where he lived in St Petersburg.Credit:Dmitri Lovetsky

That’s the most dramatically awful story I know about Fyodor Dostoevsky, but there are plenty more. His father was killed by his own serfs. After the mock execution Dostoevsky went on to serve four years of hard labour in Siberia, supposedly because of his illegal political activities (actually all he ever did was talk about freeing the serfs). He was neurotic, suffered from various chronic ailments and had epileptic fits. He was spectacularly unlucky in love, though his second wife hung around doggedly trying to protect him from a crippling gambling addiction that drove him to bankruptcy.

Somehow this tortured man wrote 12 novels, four novellas, 16 short stories and many other works. “To be a human being among human beings, and remain one forever, no matter what misfortunes befall, not to become depressed, and not to falter – that is what life is,” he wrote to his brother after the mock execution.

His masterpieces are Crime and Punishment, The Brothers Karamazov, The Idiot and Demons. I read the first two when I was young, and marvelled at how they took me inside the heads and hearts of their deluded, obsessive and homicidal characters.

This year is his 200th birthday, and it is being celebrated around the world, no more so than in Russia, where museums and art galleries have special exhibitions dedicated to his life and work. In Italy, a land artist drove a tractor around a field to create a giant image of the literary giant.

Who among us reads and studies him now? His work has not been on Australian high school curricula since the 1990s and universities have been phasing out Russian departments. However, Monash University academic Slobodanka Millicent Vladiv-Glover tells me she is one of the leaders in an active Australian Dostoevsky Society that provides a platform for advanced research and has links to scholars around the world. It is putting out a special issue of its Dostoevsky Journal to mark the anniversary year as part of its project to fulfil Dostoevsky’s legacy on the role and importance of art for human survival.

Dostoevsky has had a huge influence on writers and thinkers, from Sigmund Freud to Ernest Hemingway. Vladimir Nabokov was a dissenting voice – he nicknamed the writer “Dusty” and judged him a mediocre novelist – but others have been full of praise. “He is the man more than any other who has created modern prose, and intensified it to its present-day pitch,” James Joyce said. “It was his explosive power which shattered the Victorian novel with its simpering maidens and ordered commonplaces.”

The anniversary has seen a new crop of well-reviewed biographies. They include Dostoevsky in Love, by Alex Christofi; The Sinner and the Saint, by Kevin Birmingham; and the second in a magisterial three-volume work by Thomas Gaiton Marullo, Fyodor Dostoevsky: A Life in Letters, Memoirs and Criticism.

Does reading Dostoevsky sound to you like a heavy and dutiful task best left to scholars? Then take heed of the introduction to my edition of The Brothers Karamazov, which informs me that it is a joyful book, full of humour. Reading Dostoevsky can be absorbing, surprising, sometimes horrifying: it can also be fun.
Janesullivan.sullivan9@gmail.com

A weekly read for book lovers from Jason Steger. Sign up now.