Home » Lifestyle » HENRY DEEDES: It's remarkable how much Liz Truss has grown 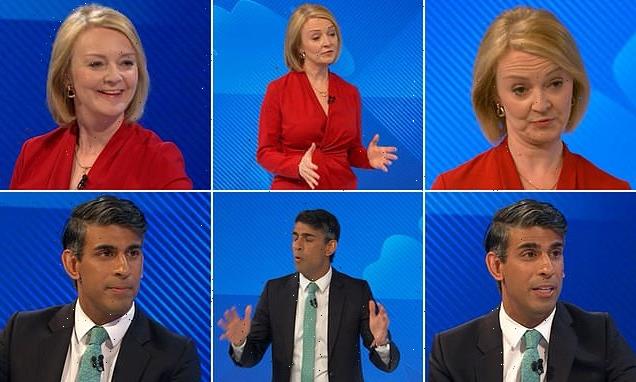 HENRY DEEDES: It's remarkable how much Liz Truss has grown

Liz Truss’ joints have loosened up and she shimmied around the stage: HENRY DEEDES sees the Tory leadership hopeful go face to face with rival Rishi Sunak in final TV debate

With the Balearic sun now finally set on another season of Love Island, we bid adios last night to another tedious television snoozefest.

Yes, on a Thursday evening at an hour when most sensible folk were lifting the stopper on the whisky decanter for a pre-sundown snort, Liz Truss and Rishi Sunak went face to face for the final TV leadership debate.

Now I’m not saying these things are frivolous. Heavens no. They’re a vital exercise in engaging the electorate, democracy in action and all that.

It’s just that when the most exciting thing to happen in them was one of the presenters toppling over – as poor Kate McCann did during last week’s TalkTV showdown – then television’s polo-necked controllers may finally have to accept they lack a certain box office appeal.

The final debate came courtesy of Sky News. I say debate, it was more like two separate grillings with a studio audience. Usually, audience participation is a nightmare but this lot actually knew their stuff. Far more so than the rent-a-mobs on Question Time. Of all the debates, this format was comfortably the most effective.

Our host for the evening was the indefatigable Kay Burley, who’s been bossing Sky’s studio before Rishi was in the playground stringing conkers in his Clarks sandals.

As an interlocutor, La Burley is icier than a penguin’s whiskers. Nurse Ratched in a Jenny Packham power suit. How she loves giving ministers a good duffing up on her breakfast programme. 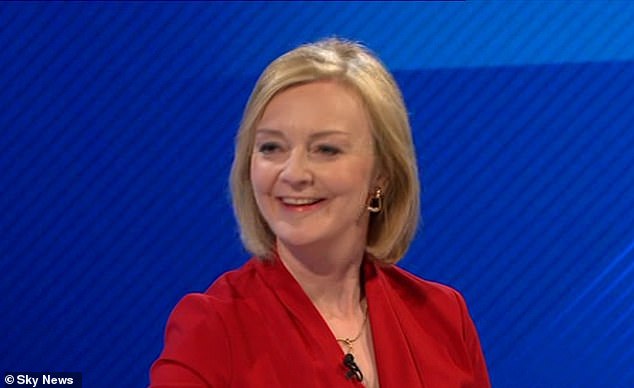 HENRY DEEDES: Remarkable how much the Foreign Secretary (pictured during Sky debate) has grown during this contest. She was fluent – no ums and ahs. The joints too have loosened up. She was able to shimmy around the stage as she answered questions. At her launch a month ago, she was stiffer than a store mannequin

Oddly, some of the male members of the Cabinet seemed to rather enjoy it. As I recall, Matt Hancock was always more than happy to return for second helpings.

Up first was Miss Truss, having won the coin toss. ‘It really is make or break,’ said Kay, doing the introductions. Cue Rocky soundtrack. Duff-duff-duff!

We heard from someone called Diana who worried about the Bank of England’s doom and gloom forecast yesterday that recession was inevitable. Liz insisted it wasn’t.

‘We can change the outcome,’ she said. ‘Now is the time to be bold.’ That’s what voters want to hear! Diane beamed. This was Elgar to her ears. One ticked ballot paper in the box marked ‘Truss’.

Remarkable how much the Foreign Secretary has grown during this contest. She was fluent – no ums and ahs. The joints too have loosened up. She was able to shimmy around the stage as she answered questions. At her launch a month ago, she was stiffer than a store mannequin.

Tax, tax, tax was her mantra. We need less of it. ‘You simply can’t tax your way to growth,’ she said. Whose fault is that? Her ‘more of the same’ opponent, of course.

On came Rishi. He seemed jittery. Hyper. A man in a hurry. Much like his whole campaign, he was playing catch-up. 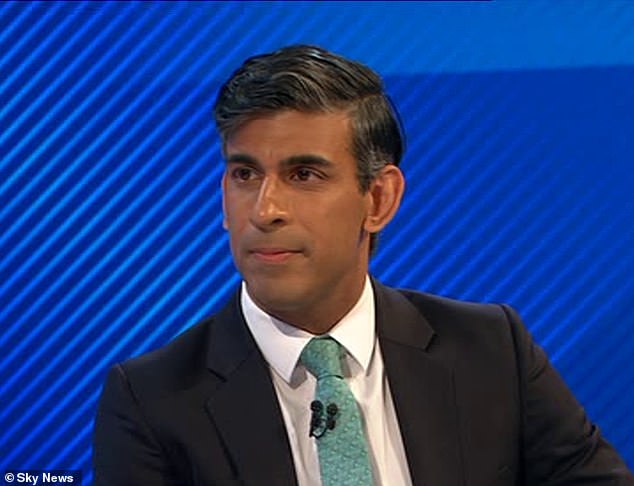 HENRY DEEDES: On came Rishi. He seemed jittery. Hyper. A man in a hurry. Much like his whole campaign, he was playing catch-up (Pictured: Mr Sunak during the Sky debate)

Going second was clearly a massive disadvantage. Good on him though. He must know his bid by now is doomed. Yet still he ploughed on, smiling and joking, charming the audience with his polished public school manners. He reminded me of a dutiful airline steward aboard a plummeting plane, insisting all’s tickety-boo.

There was an early question as to whether he was going to withdraw from the leadership contest. Course he wasn’t. He’d given up a holiday in sunny Californ-I-A to do this. He wasn’t going to pack it in early.

We got on to his ‘eat out to help out’ scheme. He’d saved businesses. They’d thanked him for it. There was a lot of ‘I did this as chancellor, I did that.’ Problem is, people are in the mood for a change.

On it went. The best that can be said was this was at least the best of these events. But still. Enough television debates already.