Home » Lifestyle » High cholesterol: The drink that could lead to 7 percent reduction in ‘bad’ cholesterol 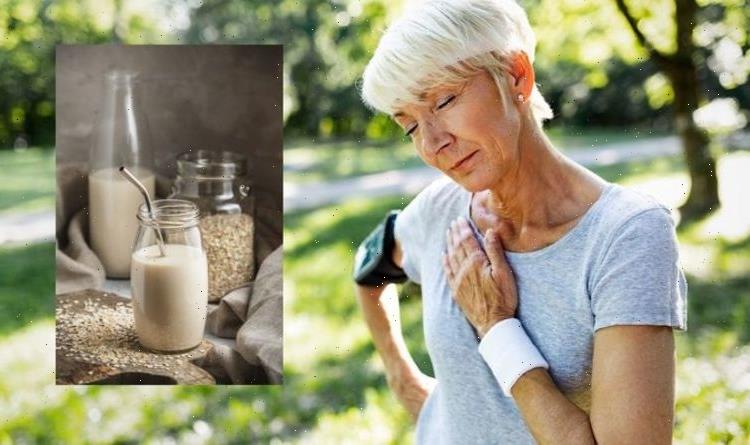 High cholesterol: The drink that could lead to 7 percent reduction in ‘bad’ cholesterol

TikTok user reveals how to make your own oat milk

Having a high cholesterol level increases your risk of a large number of metabolic conditions.
Cholesterol, a form of blood soluble fat, can increase your risk of heart disease and stroke.
A 2019 study found that nearly 40 percent of people have high or borderline high levels of ‘bad’ LDL cholesterol.
Alongside commonly prescribed treatments such as exercises and medications, there are dietary ways to improve your cholesterol level.

Another way of consuming oats is as porridge, with a bowl of porridge containing 2g of beta-glucans when prepared with 40g of oats.
The British Heart Foundation notes that many milk substitutes including oat milk have lower amounts of calcium than animal milks.
They recommend unsweetened milks that are fortified with calcium.
Other health benefits over animal milk are the lower levels of saturated fats.

Other milk substitutes have been linked to heart benefits, including ones that do not contain beta-glucans.
The British Heart Foundation says that soya protein, which can be found in soya milk, has similar cholesterol reducing properties.
A systematic review identified 25g of daily soya protein was enough to achieve a six percent reduction in LDL cholesterol levels.
A 250ml serving of soy milk contains around 8g of protein, however soy milk is higher in fat and protein than oat milk.

There are other foods besides oats and barley that contain high levels of beta glucan.
Beta glucans are used as structural components in the cell walls of various plants, fungi and bacteria.
Algae and seaweeds contain large amounts of beta-glucan, as do mushrooms and yeast.
Beta glucans from different organisms have slightly different properties, but the group have broadly similar health benefits.

Some papers have identified beta-glucans as being able to stimulate the immune system.
Consuming mushrooms with beta-glucan increases the activity of macrophages, a type of immune cell that engulfs and consumes invading cells.
It it unclear how they produce this effect.

[Some papers](https://pubmed.ncbi.nlm.nih.gov/17895634/) have identified beta-glucans as being able to stimulate the immune system.

Consuming mushrooms with beta-glucan increases the activity of macrophages, a type of immune cell that engulfs and consumes invading cells.

It it unclear how they produce this effect.

The Vintage-Inspired Touches on This Cocktail Dress Are So Elegant