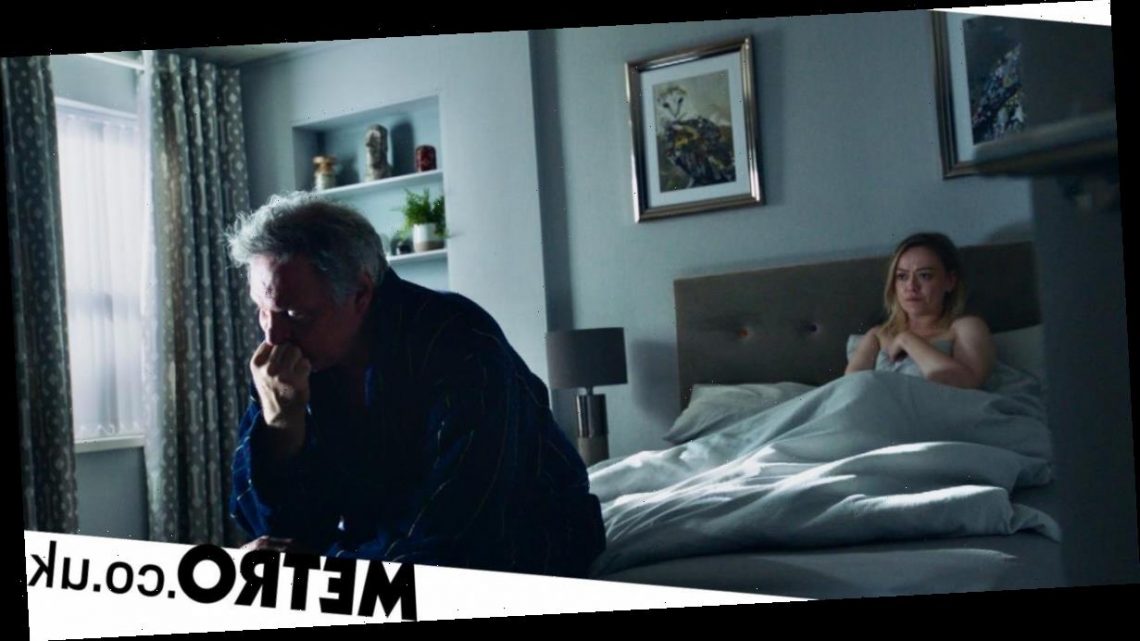 Holby City returns to our screens next week, after being off air for three months.

The last episode before the break saw an emotional end to Essie Di Lucca’s (Kaye Wragg) cancer battle as she passed away moments before she was set to marry love of her life Sacha Levy (Bob Barrett).

We also saw Ric Griffin (Hugh Quarshie) face another dramatic brain surgery that wasn’t helped by Guy Self (John Michie) breaking hospital rules and performing the majority of the operation himself.

Being Holby City, the show left us on a big cliffhanger, with Ric in a coma and Max (Jo Martin) unaware of when and how he would be when he woke up, while Essie’s friends were distraught following her death.

Next week’s big return episode sees Ric wake from his coma to find the world around him has completely changed and that Holby is gripped by the coronavirus pandemic. We see the staff battle with so many problems our NHS faced during the crisis, and one person who starts to struggle a lot is Sacha Levy.

Coupled with being a doctor in the middle of the pandemic, Sacha is also dealing with his complicated feelings of grief and sadness, that are already impacting the way he speaks to his friends – including Jac (Rosie Marcel). During the episode, Sacha gets himself tangled in Jodie Rodger’s (Sian Reese-Williams) life, totally unaware of how much things are about to change.

But just who is Jodie Rodgers? Actress Sian Reese-Williams spoke to Metro.co.uk about her new character, and what it was like to be filming at Holby City.

‘It’s been such a lovely time!’ she said. ‘It was very much out of the blue, I wasn’t expecting the call especially as things are right now, I think it was the biggest surprise I’ve had in years!’

Sian gave us the low-down on her new character. She said: ‘[She] comes in initially as a patient with presenting sort of non-descript but serious symptoms that nobody can seem to put their finger on.

‘She has a boyfriend who doesn’t really seem to want to be with her anymore, and she comes into Keller Ward and Sacha treats her and he’s kind of dealing with his own stuff and he’s a little brisk and impatient with her and she finds herself in a situation where she becomes homeless!

‘She camps outside the hospital and bumps into Sacha again and their worlds collide. She’s pretty mysterious to begin with and we very quickly come to discover that she’s quite a colourful character.’

The episode quickly sees Jodie’s life alter dramatically as her fiancé leaves her, and given how much Sacha is not being the man we know and love, Sian told us about how her character impacts the beloved doctor’s current situation.

She said: ‘He goes down a spiral of hell and I think that she unwittingly is part of that, she is a really interesting character in that from where Sacha is in terms of him pushing people away, he is the opposite side of that coin and that she desperately craves love, and it doesn’t really bother her whether its real, whether it’s genuinely reciprocated, but she’s genuinely trying to find it all of the time.

‘She’s kind of blind to it and I think the fact that she’s blind to it almost makes it worse. She is desperately trying to show love and get love from absolutely the wrong person, however, he has allowed that to happen for obvious reasons in that he’s grieving and not himself.

‘As much as you say in that he’s [Sacha] doing dreadful things, I think it’s understandable dreadful things but from her perspective she’s kind of blind to it, how much of that is in denial is probably up to the audience to decide.

‘She knows that he’s grieving, she knows all of this, and yet she still pursues this relationship with someone who just cannot give it. Her almost puppy dog likeness exacerbates the situation in a lot of ways because there’s something quite childlike about her in that she hasn’t fully developed what it’s like to be in a real adult relationship because she’s never had it, and it’s all she craves.

‘I think it’s just two people who are at completely different ends of the spectrum weirdly finding each other and getting things from each other too.’

Sacha begins to experience complicated grief disorder, something that can cause the emotions people are feeling to adjust who they are, and as Sian explained, Jodie’s lack of experience when it comes to adult relationships makes Sacha’s situation even worse.

‘I think that somebody with a more stable view of the world that what Jodie has would probably be like “actually I’m going to leave you to it and maybe call me in a year”, but that’s not what she wants, she’s just looking for kindness and Sacha shows that when he takes her in at the end of the first ep, and therefore that’s it, and she’s in love immediately.’

As much as Sacha and Jodie are opposites, they do have some things in common. Sian revealed more on this: ‘One thing they both share is their denial. They’re both in denial of their psyches. I think Sacha is in more of a conscious denial of it but she just thinks everything is fine and dandy. There are flashes where that breaks but she lives in a world of candyfloss and unicorns – or tries to!’

In the episode, Sacha is quick to let Jodie leave the hospital, aware that what she’s experiencing is just hypochondria, but as we’ve seen so much in the past, letting a patient go usually ends in disaster, so will this be the same for Jodie?

‘It’s not so much to do with her being a hypochondriac, more that she’s around him 24/7 and find the perfect way to do that. To begin with the hypochondriac thing isn’t a factor but as we learn more about her it kind of comes back in interesting ways but it’s more to do with the fact that she loves him so much – and who can blame her!’

There’s no doubt about it, we have missed Holby! With the special episode airing next week catching us up on what’s happened through lockdown and how the hospital has coped with the coronavirus pandemic, Sian gave us her final few thoughts on how she things the audience will react to the returning episode.

With Sian’s character guaranteed to make an impact on Sacha and also revealing that she ‘started filming in July and as of today [she’s] still there’, Max’s stress of running the hospital during a pandemic, and seeing our other favourite Holby City staff, the returning episode is set to be a powerful and dramatic one!

Water on Mars thought to have formed 4.4 billion years ago