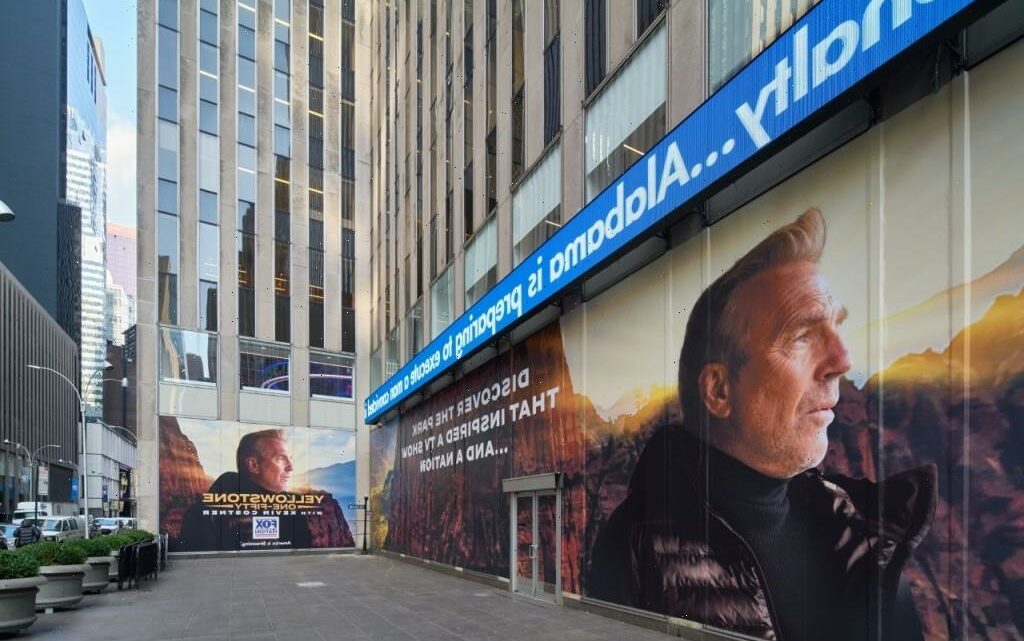 Kevin Costner has taken over hallowed space at Fox Corporation.

The exterior walls of the company’s New York headquarters have long been adorned with giant billboards touting content at Fox News Channel. Passers-by over the years might find it hard to ignore giant posters of Sean Hannity or Megyn Kelly. In more recent times, pedestrians might have sauntered by billboards talking about a Fox News Christmas tree lighting or the cable outlet’s coverage of the 2022 midterm elections.

Now, much of that area has been ceded to the actor best known for his roles in movies like “Dances With Wolves,” “The Untouchables” and “Bull Durham.” Costner is also the narrator of a new four-part mini series, “Yellowstone: One-Fifty,”  that celebrates Yellowstone National Park, and is available on Fox Nation, the streaming-video service that is also part of the company’s Fox News empire.

“It is a departure,” notes Jason Klarman, president of Fox Nation, in an interview. “That’s how big a priority this is for the company.” Costner’s visage is likely to grace Fox’s midtown Manhattan building through the end of 2022.

Fox Nation unveiled the Costner-narrated project in March, but it is surfacing on the streaming outlet Sunday, just as the fifth season of the popular Paramount Network drama “Yellowstone,” which stars Costner, has gotten underway. The combined launch of the drama’s new season and the Costner documentary’s launch has Fox executives seeing “a great opportunity to get a broader audience to subscribe to Fox Nation,” says Klarman.

The bulk of Fox Corp.’s portfolio is comprised of ad-supported media that consumers can access without a subscription. Even so, the company has dipped its toe into premium streaming waters with Fox Nation, which launched as a sort of “Netflix for conservatives,” but has expanded into what Klarman called “news adjacent” content.

Fox Corp. has never officially disclosed the number of subscribers to the service, but during a recent call with investors, CEO Lachlan Murdoch said Fox Nation had seen an uptick in subscriptions and hours spent by users watching content. To spur some of that dynamic, Fox Nation under Klarman has invested in lifestyle programming, not just the red-meat political opinions that seem to attract many of the viewers who watch Fox News Channel. Fox Nation has in recent months burnished a revival of “Cops” and other programs centered around real estate and entrepreneurialism.

“I think the outdoors is something you can imagine is something our audience is very interested in, and Yellowstone in particular is an American icon, fronted by a guy who is starring in a show by the same name who is also an icon,” says Klarman. “It’s very meta.”

In addition to the Fox Corp. billboards, Fox Nation is using attention-grabbing ad formats on Roku and YouTube, among other streaming venues, to get the word out about the new documentary. Local ads bought from cable distributors will appear during Paramount’s showings of “Yellowstone” in several markets. The company is also touting the series via billboards, some located in New York’s Times Square and near the Midtown Tunnel, and “wraps” of buses.

Fox Nation has more plans for programming that gets viewers back to nature. In 2023, the service will debut “A Year on Planet Earth,” a series produced in part by ITV that was filmed over three years in more than 60 locations across the world and shows conservationist and scientists trying to save animals from around the globe.

World Cup 2022 LIVE: Maddison NOT in England training, Qatar vs Ecuador build-up, Karim Benzema OUT of tournament | The Sun