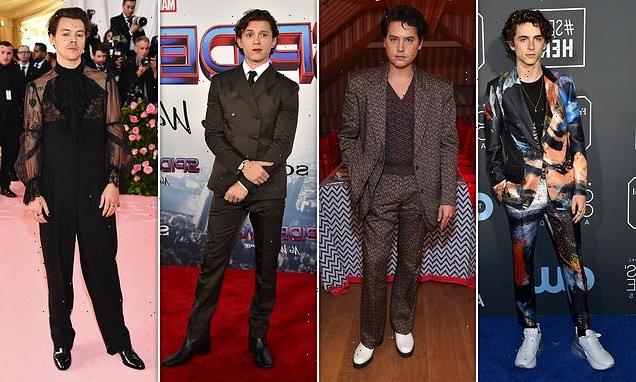 Why pretty boys have ousted beefcakes as Hollywood hottest heartthrobs: Tom Holland and Harry Styles are the poster boys for ‘non-toxic masculinity’ who appeal to Gen Z with ‘enlightened’ views, experts say

Ten years ago, baby-faced men were passed over in Hollywood for rugged looking stars with more traditionally masculine looks.

But today more feminine-looking actors with delicate features, shorter stature and symmetrical faces are more in demand because they appear to younger viewers, experts claim.

Gen Z audiences are drawn to celebrities like Tom Holland, Timothée Chalamet and Harry Styles who embody a ‘brand of enlightened non-toxic masculinity’, according to beauty expert Laura Kay.

Their symmetrical, heart-shaped faces also make them more photogenic and therefore more popular on Instagram, which has become a key part in the Hollywood marketing machine.

These non-traditional leading men also benefit because younger generations are more tolerant of things which would have seen as ‘abnormal’ in the past, such as height differences or attitudes to gender, says dating and relationship expert Alex Mellor-Brook.

Tom Holland, 25, who is dating his co-star Zendaya, also 25, for example, is 5ft 8in, shorter than one might expect for a Hollywood A-lister, while Harry Styles, 27, proudly steps out in feminine clothing and has released a range of nail polishes.

Gen Z audiences are drawn to celebrities like Tom Holland, Timothée Chalamet and Harry Styles who embody a ‘brand of enlightened non-toxic masculinity’, according to beauty expert Laura Kay. Pictured, Timothée Chalamet (left) and Cole Sprouse, who possess these qualities

Laura said: ‘The likes of Timothée Chalamet and Tom Holland have a perfect facial symmetry, it is almost heart shaped, which makes them naturally very photogenic. Studies have shown that heart shaped faces are deemed the most attractive facial shape around.

‘They are not macho and sculpted in a different kind of way. Instead, they have a smouldering, brooding look about them that is both attractive to male and females.

‘It is the perfect balance and, in my opinion, they look “ageless” which further adds to their wider appeal. To the untrained eye it is hard to tell their age.’

She also said that celebs with these features appear more relatable and trustworthy than their more masculine counter-part.

‘They also have a charismatic vibe about them, a cheeky smile and glimmer in their eyes,’ Laura said.

‘It is refreshing to see them embracing their individuality through fashion and style, for example.’

Tom Holland, 25, who is dating his co-star Zendaya, pictured, for example, is 5ft 8in, shorter than one might expect for a Hollywood A-lister. But he is a heartthrob in the eyes of Gen Z fans

WOMEN TURN TO MUSCULAR MEN FOR FLINGS, NOT MARRIAGE

Meanwhile, Alex Mellor-Brook, dating and relationship expert at Select Services, said that while people finding slender features attractive is nothing new, the pandemic had changed women’s attitudes as to what they are looking for in partners.

‘Another factor is down to the younger generation being a lot more tolerant to what has been seen as ‘out of the norm’ by other generations,’ Alex said.

‘So the issue of height differences with a couple will not be questioned as much, similar to a more European attitude. However, it still remains a dominant choice for a lot of women when choosing a partner.’

The relationship between Spider-Man costars Tom Holland and Zendaya has brought the topic of height difference between partners back into the spotlight recently.

Alex said muscly men are deemed attractive because on a primal level, they look healthy and likely to produce good offspring. But in our modern world, Alex said that women turn to muscular men for flings rather than for marriage.

‘If the woman finds herself attracted to both men and other women, then this will also influence those options,’ he continued.

‘The slender appearance will present a less “macho, tough guy, non-committal” impression and a more caring, committed, sensitive side which is currently a trend in women searching for a life-long partner after their experiences over lockdown,’ he went on.’

Dr Ross, Perry, Medical Director of Cosmedics skin clinics said that trends on what is attractive in men keep changing.

‘Over the decades this has constantly changed from pumped up bodybuilders in the 90’s such as the Gladiators or the Chippendales through to the days of heroin chic of Kurt Cobain- think ultra slim, small muscle mass and rugged yet attractive features,’ he said.

‘Culturally today we’re more open in what is seen as attractive, the rise of the drag queen is a perfect example, we’re seeing beauty and attractiveness in a completely different light.’

Former One Direction Star Harry Styles, 27, has been playing with gender constructs and appeals to Gen Z fans because of his ‘enlightened’ views. Above, at the Met Gala in 2019

A DIFFERENT ATTITUDE TO FITNESS

Our attitude to fitness has changed, and Dr Ross said that people are now looking for their partner to be lean and physically strong rather than muscular.

‘Someone who is lean, goes to yoga classes and chooses to express themselves and indeed their bodies in untraditional ways,’ he explained.

‘We don’t necessarily need someone to be over 6ft to appreciate their attractiveness, small and slender is what’s “trendy” on social media, it’s attractive, edgy, cool and sexy as is someone who doesn’t conform to what to masculinity traditionally looks like.’

And the fact that men are more open about their mental health nowadays and showing their sensitive side more easily also influences how they appear to potential mates. 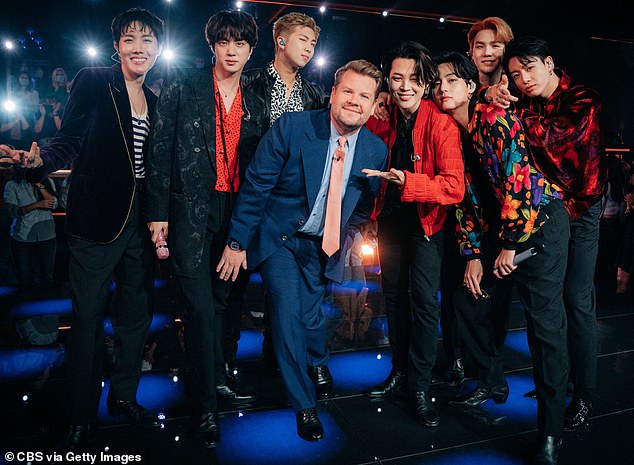 The Korean pop band BTS, pictured with James Corden on his Late Late Show on December 8, have such dedicated fans they call themselves ‘BTS Army’. They are a perfect example of the more androgynous look coveted by today’s younger fans

‘Today men openly talking about mental health, aren’t afraid to wear make-up, play around with fashion and this shows confidence and makes them appear more personable and in turn makes them seen as more attractive not just to the younger generation but also the older generation too,’ Dr Ross said.

A FLUID IDEA OF BEAUTY

And these celebrities often cater to a ‘woke’ audience, because the idea of beauty has become more ‘open and fluid.’

‘There’s a huge proportion of male “celebrity” who fit into a category of being “woke” in their outlook and thought process not feeling they have to conform to what society deems as classically handsome,’ Dr Ross said. 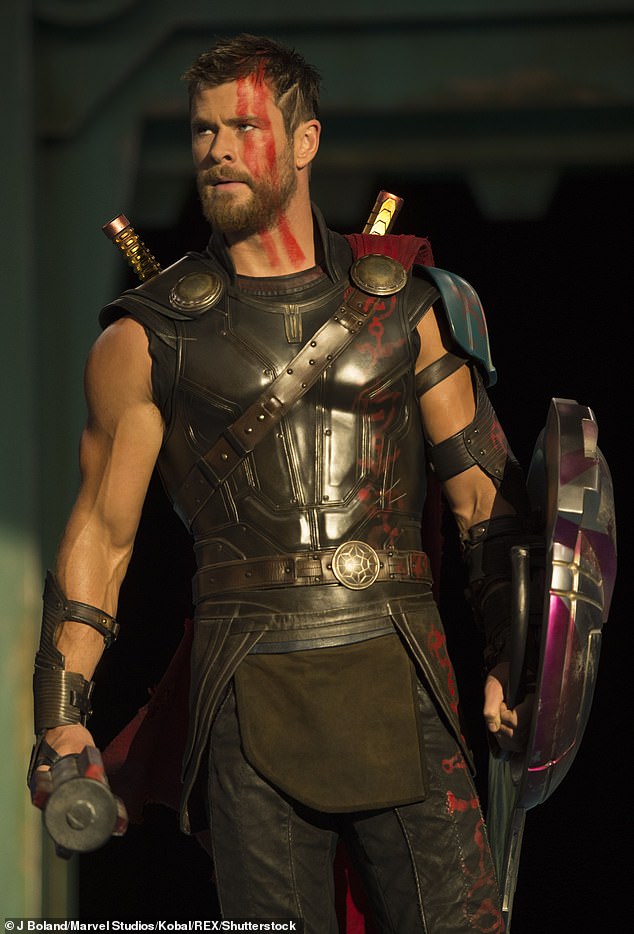 Chris Hemsworth trim physique as the god of thunder in Thor: Ragnarok was still a hit with fans

Hyper masculine-looking men like Dwayne Johnson, pictured in Santa Monica in December, are deemed attractive because on a primal level, they look healthy and likely to produce good offspring, an expert said

‘But they are having more fun with their appearance, sexuality and we’re finding this hugely attractive.

‘Someone who isn’t afraid to express themselves with make-up, highlighting a strong cheek bone, waring eye make-up to accentuate the eye shape, not being afraid to show off flawless looking skin or sport full lips or washboard stomach is creating a much more attractive male.’

And this also manifests itself in the number of men who ae turning to cosmetic surgery for ‘tweakments.’

‘Whereas before they were embarrassed to have fillers, or Botox, men are now wanting to look as good as women and take care of their appearance including their bodies,’ he added.

I'm not giving up my chips and gravy despite losing three stone, says Charlotte Dawson