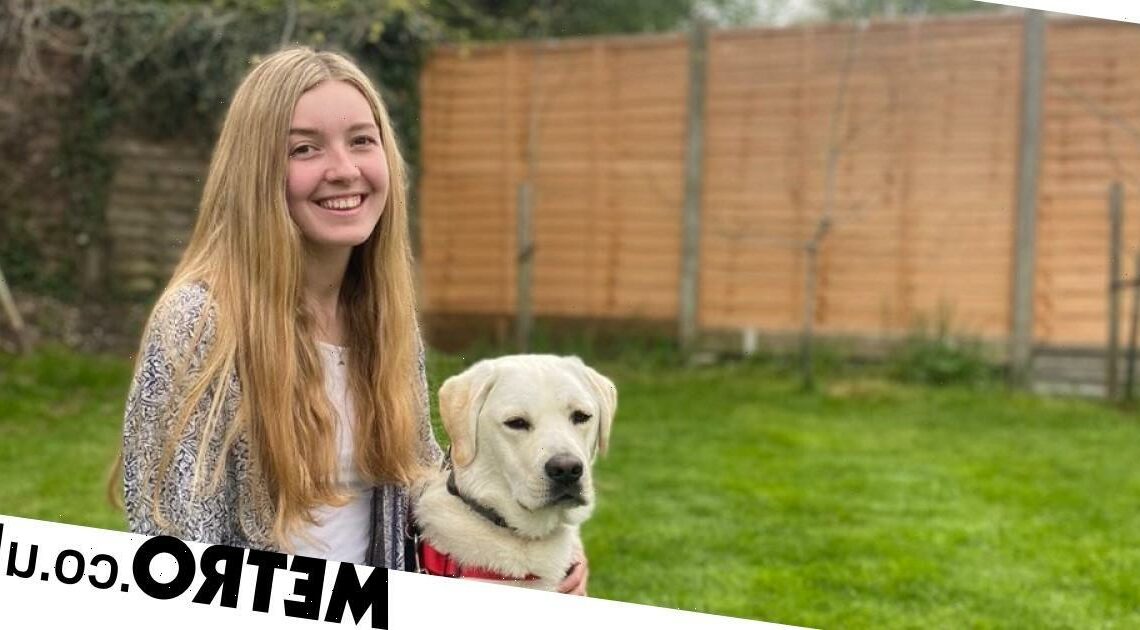 I'm training my dog to go on to save lives 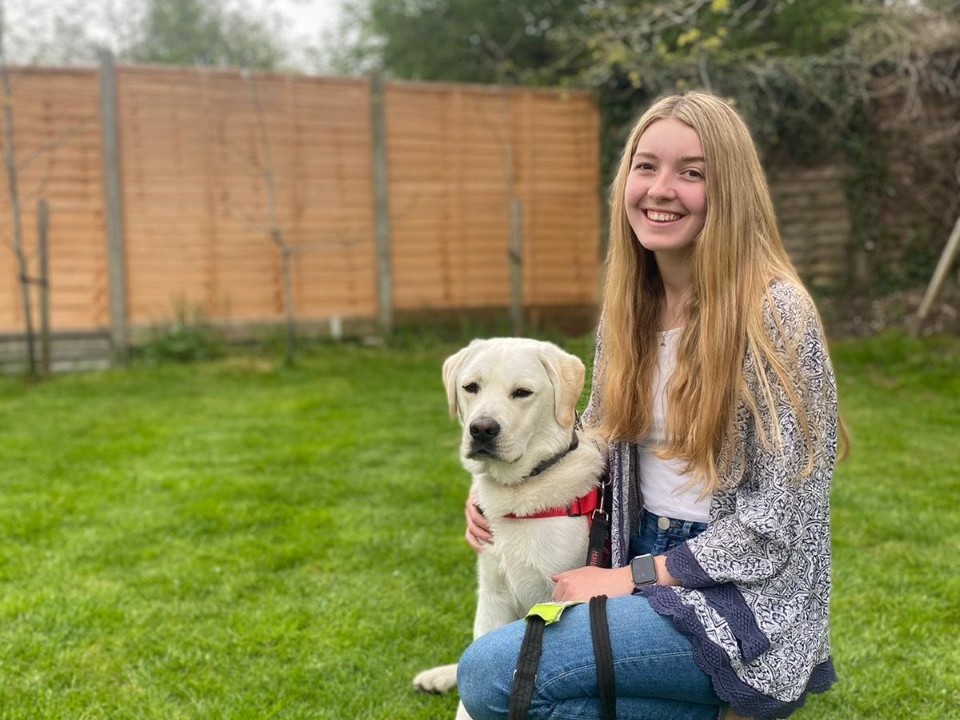 I’d been asking my parents for a puppy for Christmas for years with no luck.

When I was really small we had a black Labrador, who I loved, but he sadly died in 2015 and I was desperate to have a dog in the house again.

Then last year, with the world shutting down because of coronavirus, and my gap year after finishing school off the cards, my parents relented and we welcomed Ernie the yellow Labrador into our house.

Except, Ernie is slightly different to other dogs – he’s a medical detection dog and I am his volunteer socialiser.

Medical Detection Dogs is a charity that trains dogs to be able to sniff out serious diseases and illnesses, like cancer, type 1 diabetes and coronavirus. The charity has a no kennel policy so the dogs either live with volunteers, members of staff or, once they complete training, they can be housed with someone with a condition that they can monitor 24/7.

That’s what Ernie will be doing when he’s ready – but until then he will be living with my family.

I first heard about the charity when I was scrolling through Facebook one day. I saw an ad that was looking for families to take in dogs in the Essex/Suffolk area and applied.

The online form asked questions like whether I had a secure garden, whether I was home during most of the day and whether dog training was something I was interested in.

I heard back within a couple of days from the charity’s head of volunteers and they set up a big Zoom information session with probably 25 potential volunteers from my area. Here, I heard more about what becoming a socialiser would involve and it made me more certain about applying.

The regional trainer also came round to our house. She couldn’t come inside because of Covid-19, but we FaceTimed as she stood outside so she could be shown around to make sure it was suitable for a dog.

It must have been only a few days after that she rang me to say ‘we’ve got a dog for you’. He turned up the next week. Within a month of applying, I was given a puppy and it was love at first sight.

Ernie was eight weeks old, tiny and fluffy when he arrived in July 2020 and it’s been so rewarding to see the progress he’s made since joining us.

As a medical detection dog in training, Ernie is busy. On Mondays, we have puppy training class where we go to a local park and meet with the other socialisers and their dogs.

Once we get back, the rest of the week is all about repeating these lessons so Ernie has a full grasp of what he’s been taught. If he’s struggling, we can organise a one on one session with the regional trainer to help him get to grips with it.

One of the biggest lessons is about teaching him to not get distracted in public places. I’ll often take him into the supermarket – wearing his vest that alerts other customers he’s performing a very important job – to get him used to being around lots of different people, sounds and scents.

Aside from that, I also need to make sure that he responds to commands. We want him to go onto his next home without having to be taught how to behave. For example, I no longer have to tell Ernie to sit – he just does it reflexively when I stop walking.

You don’t always see the dogs pick lessons up straight away after Monday class, but over time the progression is so impressive. All the hard work does pay off.

Of course, it is still important for Ernie to have downtime and chill out. He loves doing this with his best friend – another other assistance dog in training called Jordan. They could spend hours playing together, but also enjoy quiet snoozes in the evening.

Medical detection dogs are generally with their socialisers for 15-18 months before they’re considered trained. I think Ernie’s going to need another five or six months before he’s ready.

From there, he’ll spend a couple of weeks getting to know his new client’s scent so he’s ready to help them before he goes on to their home.

About four months ago, I would have said I was completely fine with the idea of Ernie moving on, but it does get tougher the longer you have them.

When he first arrived, he was a little bundle of energy, and like most dogs he was quite rebellious (eating anything and everything – including the internet cable).

Then, at eight months, he really started trying to test the boundaries and ‘forgot’ what he’d been taught, jumping around and chewing the lead. But now he’s approaching a year he’s really calmed down.

As soon as the penny drops for them, it’s just really nice watching them understand and become more obedient.

It will be really difficult when he leaves, but ultimately I know he’s going to go and make someone’s life so much better.

Plus, our family have just got another dog. She’s a little Red Setter called Ginny and is a pet, rather than a medical detection dog.

It’s been a whole different experience to when Ernie arrived. When you have one dog, they have to make their own entertainment, and that’s when the destruction happens – but we’ve had none of it this time as they entertain one another.

It’s also easier whenever I take them out, they’re not excited about meeting new dogs because they have each other.

I love walking them around town, watching Ernie getting appreciative looks in his vest, and him and Ginny being well behaved. It feels like I’m doing something really positive.

It’s why I would say that anyone else who could be interested in taking on a medical detection dog – and who meets the criteria – should definitely consider it.

It’s not just a brilliant charity, helping people manage their conditions and detecting illnesses in others, but it’s a wonderful community too.

The past year has been hard for everyone, but Ernie helped get me out the house. He’s given me a routine and I’ve been able to meet so many new people both in person and online. There’s a whole community of socialisers out there.

While I think I might not be able to continue taking in new dogs after Ernie, with the world opening back up, I know that I will return to it one day.

The pride I feel for Ernie’s progress is unlike anything I’ve experienced before. I know that he will have such a positive impact on the life of whoever he ends up with.

This year sees the return of our brilliant charity campaign: Metro.co.uk Lifeline.

Our aim is simple – to raise as much money as possible for charity with YOUR help.

For 2021 we have chosen to support Medical Detection Dogs, a vital organisation that helps train dogs to sniff out serious diseases such as cancer, Type 1 diabetes, Parkinson’s and coronavirus.

As well as sharing their story to help raise awareness, readers, charity supporters and celebrities will also be taking on a 26-mile trek or 10k dog-friendly hike across the Oxfordshire countryside on Saturday 2 Oct, 2021.

This year sees the return of our brilliant charity campaign: Metro.co.uk Lifeline.

Our aim is simple – to raise as much money as possible for charity with YOUR help.

For 2021 we have chosen to support Medical Detection Dogs, a vital organisation that helps train dogs to sniff out serious diseases such as cancer, Type 1 diabetes, Parkinson’s and coronavirus.

As well as sharing their story to help raise awareness, readers, charity supporters and celebrities will also be taking on a 26-mile trek or 10k dog-friendly hike across the Oxfordshire countryside on Saturday 2 Oct, 2021.

Volunteers’ Week takes place 1-7 June and highlights the amazing ways people can give back and help others. To get involved click here.