A species of ant can shrink its brain by as much as 20 per cent but is able to grow it back to full size in future, the first insect ever discovered with such an ability.

The humble Indian jumping ant is less than an inch long and, before this most recent revelation, was most well-known for its ability to leap several inches into the air.

But scientists from the US found the insect can release hormones which shrink its brain by a fifth to divert resources to its reproductive system.

However, if these extra nutrients and energy are no longer needed in the future, the ant can revert back to its original state. 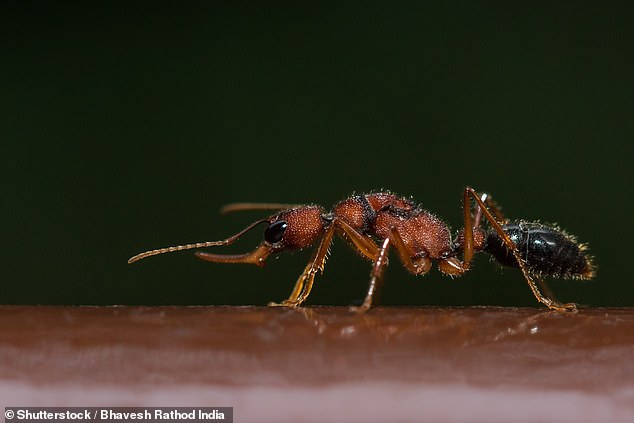 The Indian jumping ant (pictured) is less than an inch long and females vying to replace a dead queen shrink their brains and use the energy to grow their ovaries. The change can be reversed, a study found

In ant colonies, normally only the queen and males are able to reproduce, and when the matriarch dies, so too does the colony as the other females are sterile.

But Indian jumping ants have a different succession procedure which means that when the queen perishes, female workers compete for the job.

These battles involve jabbing one another with their antennae and at some point a victor is declared, who then takes on the responsibility of queen.

Exactly how a colony settles on its next ruler remains unknown.

But a team of researchers from the US studied what happens when the champion female has been selected as queen and noted a variety of anatomical changes.

For starters, her ovaries swell up to five times their original size, increasing her egg-making ability.

But this process is extremely energy intensive, and in order to fuel it the ants release a hormone which sees its brain shrink in size — a rarity in animals, seen in a few insect species, such as honeybees.

The energy saved by reducing cognitive capacity is thought to be diverted to the ovaries to increase the female’s likelihood of becoming a functioning queen.

But the scientists who studied 30 colonies in a lab found that if the queen loses her newly-acquired regal status, her body is able to reverse the drastic changes with her ovaries shrinking back to their original size and the brain rebounding to its full size.

This reversible shrinking of the brain is extremely rare, with the Indian jumping ant being the first known insect species with the ability.

‘If you look inside their bodies, you can see the huge transformations that they undergo,’ said Dr Clint Penick, lead author of the study from Kennesaw State University in Georgia, told The Telegraph.

The full findings are available in the journal Proceedings of the Royal Society B.

Ants are known for their teamwork and incredible strength, but they also have another evolutionary weapon, they can use tools to survive when in danger.

The insects have been seen for the first time using grains of sand to get liquid food out of a tub if the threat of drowning is too high.

Using tools is seen as a sign of animal intelligence, mostly observed in primates and some birds.

Study co-author Dr Jian Chen, of the United States Department for Agriculture, said: ‘We knew some ant species are able to use tools, particularly in collecting liquid food; however, we were surprised by such remarkable tool use displayed by black imported fire ants.

‘Our findings suggest that ants and other social insects may have considerable high cognitive capabilities for unique foraging strategies.’