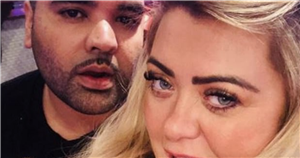 As Naughty Boy gains popularity in the I'm A Celebrity… Get Me Out Of Here! star castle, viewers at home have grown curious about his past. In particular, his past relationships and whether he is currently single.

While the music star is currently without a partner, he has been linked to some fellow famous faces in the past.

From flirtations with potential collaborators to dates with TOWIE stars, the 36-year-old hasn’t been short of female attention.

In 2019, Naughty Boy was linked to Gemma Collins after posting a series of photos of the pair with arguably loved up captions.

Sharing snaps with fans, the rapper described the GC as “My new favourite singer the QUEEN of EVERYTHING”.

He shared the same snap on Twitter, adding: "She's one in a MILLION she's NOT To be UNDERVALUED #Queen"

Gemma replied to the pictures to say “what a weekend we had” which was enough to convince some fans that romance was on the cards.

However, Naughty Boy has never been married and in terms of children, no one knows if he has any children.

The currently single star has been tipped for romance with fellow campmates, according to his family watching at home.

Despite this, the music producer’s friends and family are predicting sparks could eventually fly.

In an interview with the Sun, Naughty Boy’s niece Aisha discussed her Uncle’s potential for a relationship with anyone in the cast.

Chatting about any chance of romance in the castle this year, she said: "It would be funny if it was Snoochie, after all the competition they have had. We will see. He is single!"

This week Naughty Boy was defended by his closeknit family after being criticised for expressing his plans to quit ITV's I'm A Celebrity… Get Me Out Of Here! Following a trial against Snoochie.