Home » Lifestyle » Inside The One: The Most Expensive Bel-Air Mansion 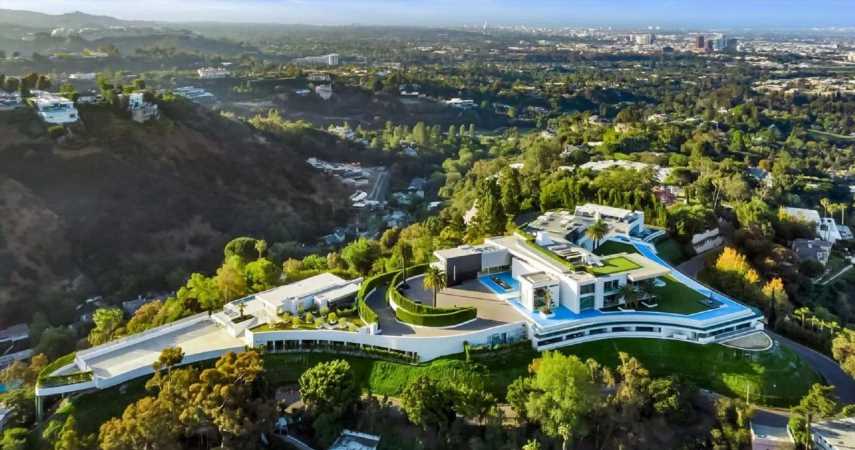 Inside The One: The Most Expensive Bel-Air Mansion

Tons of celebrities own an estate on Bel-Air, even the Bennifer own a $50 million mansion in the area. There aren’t that many places like California, but you won’t find another one like Bel Air—a neighborhood in Los Angeles with the highest average income in the city. In addition to the fresh prince, Bel-Air has long been the residence of Hollywood’s A-listers like JayZ and Beyonce due to the area’s reputation for its high-end real estate.

The One Mega-Mansion in Bel Air is one of the largest houses in the United States ever to be put up for sale. Even though the mansion’s estimated price was at least $500 million, it sold in March 2022 for a substantial discount. The property has been in the works for almost a decade.

Now it stands on a hill in Bel Air and overlooks the Los Angeles basin below. The enormous mansion has a whopping 21 bedrooms, 42 bathrooms, seven half-bathrooms, a 3-bedroom guest house, six elevators, a Library, a cigar room, and a confectionery room.

The interiors of the 105,000 square-foot mansion, which sits on a five-acre lot in the exclusive Los Angeles neighborhood of Bel Air and is appropriately dubbed The One, has always been kept under wraps. However, due to reports of its foreclosure, the mansion was up for grabs for the world to see. The One sits in the Los Angeles area where are tons of expensive restaurants, it is in privileged position on a hill affords breathtaking views of the surrounding area. The estate appears to float above the city thanks to its moat and 400-foot-long running track surrounding it on three sides.

The home’s claimed million-dollar price tag is justified by the efforts of architects Paul McClean and Kathryn Rotondi, who owner and developer Nile Niami hired. The project took almost a decade to complete and involved 600 workers.

However, it boasts its majestic view and location and the property’s spectacular art collection resulting from a partnership between Creative Art Partners and Art Angels. It includes a butterfly installation by Stephen Wilson on the lower floor and a custom panel in black and silver by Niclas Castello in the office.

The by Showroom range also includes a wide variety of custom furnishings. Due to the city of Los Angeles’ new ordinance, it has been made illegal to construct homes of this size, ensuring that The One will forever be unique.

The Stunning Features Inside

The main bedroom is 5,000 square feet, which is more space than most apartments in New York City. It also has a sitting area, enormous closets for everyone, and an office. In addition, a guest house on the premises is 4,500 square feet in size and is designed to accommodate guests who would rather stay in an altogether distinct structure.

The main house is encircled by a series of infinity pools that function like a moat and contribute more to the castle on a hill aesthetic. However, this is only one of many reasons you want to spend time outside in this location. The elevator in the estate stops at the roof deck, so you won’t have to walk up the stairs to get to the deck, which is 10,000 square feet in size and offers breathtaking views of the city.

For those who have a passion for cars, the house also offers an underground garage that can hold up to 30 vehicles and is equipped with two turntables so that you can show off your most prestigious brands. If you are more of the fitness kind, the third floor includes its gym and lap pool, a four-lane bowling alley, a hair salon, and a juice bar that is perfect for post-workout smoothies and other beverages of a similar nature.

Additionally located on this floor are a movie theater which can be included in the best movie theatres in the world, a wine cellar stocked with 10,000 bottles, and a cigar lounge for those who would instead relax with a cigar than watch a movie.

Nile Niami, the property’s developer, set out to create one of the finest properties in the world. There have been challenges in putting this property on the market. According to court filings, the owner has defaulted on more than $100 million in loans and obligations, and in September 2021, CNN reported that the property’s value had been valued at $500 million. In the summer, as an alternative to foreclosure, the home’s debts were placed in receivership with the court to complete the real estate transaction.

Paul McClean, the architect behind the opulent and minimalist designs of the mansions of Avicii, Calvin Klein, couples Beyoncé and Jay Z popularized this style. A butterfly installation by visual artist Stephen Wilson and a sculpture by Venetian glassworker Simone Cenedese are just two of the original artworks included in the sale, providing a touch of luxury to the otherwise neutral color scheme and spare architecture.

According to the Los Angeles Times, the mansion reportedly sold for $141 million to Richard Saghian, CEO of quick fashion chain Fashion Nova. A close associate of Saghian has revealed that the fashion magnate owns 100 percent of the business, which supplies him with more than $1 billion in annual revenue.

READ NEXT: A Peek Inside Adam Levine’s Montecito Mansion