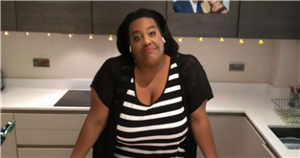 Alison Hammond is currently lighting up screens as a regular presenter on This Morning.

Naturally, her regular TV slots have left fans wanting to know more about her life off-screen.

The 47 year old lives in Birmingham with her 16-year-old son Aiden and commutes into London for her regular Friday slot which she presents alongside Dermot O Leary.

Alison has given fans plenty of glimpses inside her beautiful home including while presenting live for This Morning.

The hilarious former Big Brother contestant hosted a baking segment for the ITV daytime show from her house where she whipped up some Pret-inspired chocolate chip cookies.

In the background, Alison had really run with the theme of the segment sticking up illustrations of cookies all over her black kitchen cupboards.

The kitchen area also features some hung up some fairy lights as well as a photo of Phil and Holly, who Alison admits that she missed during the lockdown.

It's not the first time we've had a look inside Alison's Birmingham home, as previously she posted Tik Tok video where her son Aiden walked in on her doing a saucy dance routine.

Alison was glammed up in a red checkered dress with a black top underneath, teamed with a red lip, hoop earrings and her hair in a bouncy blow-dry for the video.

The TV personality shared the video to her Instagram account and captioned the hilarious clip: "When you throw shapes in the kitchen and your son walks in not impressed."

Alison was dancing around in her kitchen when Aiden entered the room behind her to both her and his surprise.

Alison gave a brief glimpse of her living room while watching her own appearance on Celebrity Bake Off alongside James Blunt, Alex Jones and Joe Sugg.

Above her television hangs a collection of family photos, of herself and treasured snaps of her late mother.

Alison has three white baskets neatly placed underneath the TV as well as a fluffy grey rug.

The TV star also previously shared her dining area on This Morning, which is open plan and features a wall of family photographs.

Alison has also previously revealed the unique design of her back garden, that features some brightly coloured graffiti artwork.

The area featured as she filmed an episode of Who's Doing the Dishes with Brian McFadden.

Alison cooked from her home for several guests and they had to rate her food, which she didn't get a good score for and ended up having to wash her own dishes.