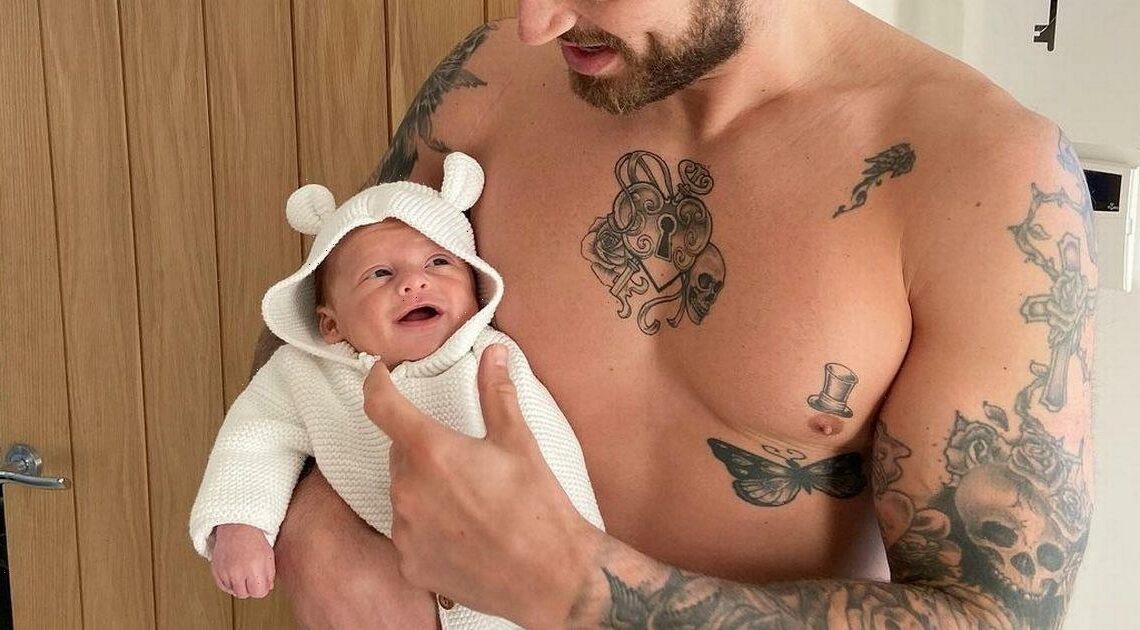 Jake Quickenden has defended his decision to set up an Instagram profile for his three-month old son Leo – saying the social media account is an "amazing gift".

The former X Factor star, 32, says giving baby Leo his own social media page is an "amazing gift to give him" and hopes it will boost his future career.

This comes after the pair announced they were new parents on Instagram after welcoming Leo back in late February – alongside some adorable photos of the little one.

The Dancing On Ice champ, who shares his first child with his therapist girlfriend Sophie Church, 28, revealed his baby boy's Instagram account had gained nearly 30,000 followers (50,000 as of 29 May).

Chatting on Vicky Pattison's The Secret To podcast on Thursday (27 May), he proudly announced: "We made him an Instagram. He has got nearly 30,000 followers now.

"We’ve got him a bit of a platform. He will have a few followers which is lovely."

Continuing on Leo's immediate Instagram fame, the singer said: "With all these memories of growing up, from a baby to one, two, three, four, five…He will see me and Soph' getting married.

"I wish I could look at picture after picture of me growing up. I have got like 10. I just thought it was such a nice thing."

Jake explained that he and Sophie set up the page to help little Leo's future career – believing Leo will become an "athlete or model or something".

However, Jake has sadly been the subject of social media trolls who have been hurling insults at the baby's appearance online – calling the newborn "weird" and that he "needed Botox".

Proud dad Jake was quick to defend his son from the insulting messages, hitting back at the online haters in a post on Instagram saying that "to troll an innocent child is so wrong" and that the people doing it "need to seek help".

In a post defending Leo from the horrid comments, Jake penned: "REAL POST… So in the past week this little man has been told he needs Botox, that he's ugly as f**k and that he's weird looking.

"I don't mind people giving me s**t, as sad as it is I've had to get used to being called 'irrelevant, ugly, attention seeking' and the list goes on but to troll a innocent child is so wrong and the people doing it seriously need to seek help."

He continued, saying: "Also why should I stay off social media if I don't want him trolled the thought process of some people is shocking, maybe people just shouldn't troll.

"I enjoy social media it's full of lovely people who are supportive and I like sharing my ups and downs, I try and be real as possible, but unfortunately there is a dark side of social media and something needs doing about it.

Although the reality star and father-of-one has made efforts to ignore the mean comments, he has admitted it will be hard to resist protecting his son against them as times goes by.

In an interview with The Sun, Jake opened up saying: "Obviously the emotions I felt when he was trolled was anger and like surprise.

"I understand if someone doesn't like me, I can be a bit annoying so I get that. But to troll a baby to try and get a reaction out of me, is a little bit low.

"But you have to think, these people might need the random act of kindness. These people are probably the ones that need it."

Jake continued saying that he is trying to focus on the positives – and he also revealed he deleted the screenshots shortly after posting them in an effort to protect the internet troll being trolled themselves.

Man City vs Chelsea: 40/1 odds for Phil Foden to have a shot on target in Champions League final TODAY
Recent Posts