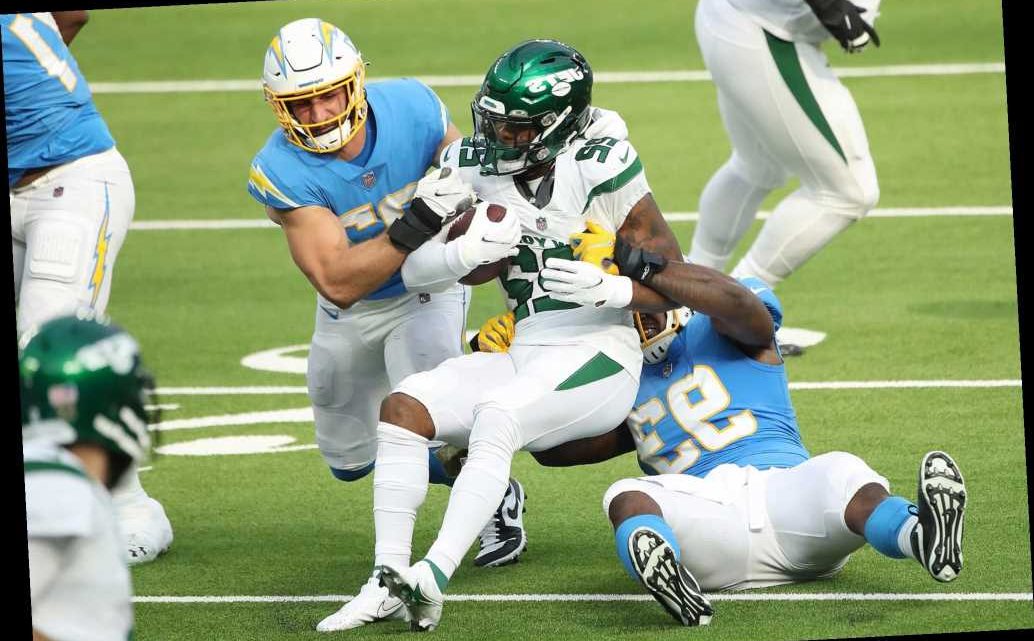 All the Jets fans rooting for the team to be competitive but lose are getting exactly what they want lately.

The Jets nearly overcame an 18-point halftime deficit and made things interesting in a 34-28 loss to the Chargers at SoFi Stadium in Los Angeles on Sunday.

The loss is good news for Jets fans hoping for the No. 1 pick and the chance to draft Clemson star Trevor Lawrence. But it is another dismal week for the current Jets, who had hope late after playing a terrible first half.

Against a Jets secondary that had three rookie starters, Chargers rookie quarterback Justin Herbert looked unstoppable for most of the day. He completed 37 of 49 passes for 366 yards and three touchdowns. He connected with wide receiver Keenan Allen for 16 receptions, 145 yards and one touchdown.

Jets veteran quarterback Joe Flacco struggled early but found a rhythm in the second half. He wound up 15 of 30 for 205 yards, two touchdowns and one interception that was returned for a touchdown.

Flacco had a chance to orchestrate a game-tying drive with 2:48 left, but fell short. The Jets got the ball back at their own 46 after a defensive stand, trailing 34-26. A roughing the passer penalty on Chargers star Joey Bosa put the Jets at the Chargers’ 33. They advanced one more yard, but no further. Flacco’s fourth-and-9 heave to Denzel Mims fell incomplete at the goal line.

It appeared from TV that Adam Gase took back play-calling duties from Dowell Loggains in the second half. If he did, Gase orchestrated three touchdown drives to give the Jets some life after trailing 24-6 at halftime.

After playing conservatively in the first half, the Jets finally took a deep shot on their first drive of the third quarter and Flacco hit Breshad Perriman for a 49-yard touchdown. It was Perriman’s first catch of the day. The bomb with 11:27 left in the third quarter cut the Chargers’ lead to 24-13. Perriman beat cornerback Casey Hayward.

The long touchdown provided some hope the Jets might be able to make the game interesting, but that hope was diminished quickly. Herbert led the Chargers on a 12-play, 75-yard drive that was capped with a 13-yard touchdown pass to Allen for a 31-13 lead.

The Jets scored again on a 10-play, 60-yard drive that was aided by Chargers penalties. Frank Gore plunged in from the 1-yard line for his first touchdown as a Jet. Rookie Denzel Mims starred on the series, though, drawing two penalties and making one really nice catch along the sideline. Sam Ficken missed his second extra point of the game, leaving the score at 31-19.

That left the Jets with some life and Gang Green put together a nine-play, 64-yard drive that was finished off with Flacco hitting tight end Chris Herndon for a 6-yard touchdown with 4 minutes left in the game. Herndon’s first touchdown of the season left the Jets down 34-26 with hope of their first win of the season.

The defense, which struggled all day, then held the Chargers to a three-and-out, giving the offense the ball back with 2:48 left to play.

The Jets got off to a hot start in the game, but it did not last long.

The defense forced a punt from the Chargers on their opening drive of the game and Jets defensive end Henry Anderson blocked the Ty Long punt and Quinnen Williams jumped on it for the Jets at the Chargers’ 29.

The Jets rode Gore inside the 10 on three rushes for 24 yards and then rookie La’Mical Perine scored his second touchdown of the season, running it in from the 5. Ficken, who missed the last three games with a groin injury, missed the extra point and the Jets’ lead was 6-0.

Los Angeles got the ball back and moved down the field, but Jets safety Marcus Maye hit Allen at the 1 and forced a fumble that fellow safety Ashtyn Davis jumped on to give the ball back to the Jets.

The Jets had all the momentum on their side but Flacco handed it back to the Chargers. On their first play after the fumble, Flacco threw an awful pass intended for Jamison Crowder that Chargers cornerback Teavaughn Campbell intercepted in the flat and returned 6 yards for a touchdown and a 7-6 lead.

The rest of the first half was all Chargers.

The Jets looked hopeless with their secondary in tatters. They started three rookies in their secondary with Ashtyn Davis at safety along with Lamar Jackson and Bryce Hall at cornerback. They also had backup cornerback Arthur Maulet starting in place of Brian Poole, who is done for the season after having shoulder surgery.

Herbert, the talented rookie, had a field day against the Jets secondary. He hit Williams for a 39-yard touchdown and a 14-6 lead after some poor tackling by the Jets.

Herbert found the end zone for a second time on a 2-yard scoring pass to tight end Hunter Henry.

11/28/2020
Three-year-old girl found dead inside scorching car in 33C heat as mum and boyfriend charged with manslaughter
This website uses cookies to improve your user experience and to provide you with advertisements that are relevant to your interests. By continuing to browse the site you are agreeing to our use of cookies.Ok