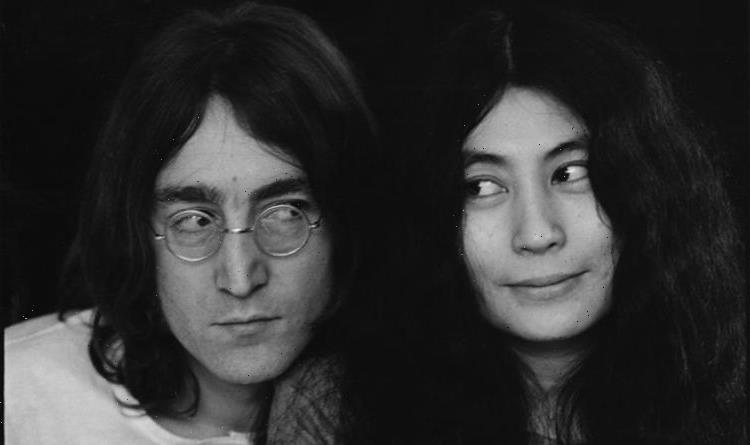 John Lennon: Imagine could never have happened without Yoko Ono

John Lennon’s second studio album Imagine was released 50 years ago tomorrow, September 9, in 1971. The hugely successful album was released just one year after The Beatles split up, proving the star had what it took to be a success on his own. The album’s title track, Imagine, is still one of the singer’s best-selling songs of all time, selling more than 1.64 million copies by 2013. However, the track’s wordplay originated with Yoko Ono, Lennon later revealed.

Lennon attributed the beginning of Imagine to Ono’s 1964 book Grapefruit.

He said at the time: “There’s a lot of pieces in [Grapefruit] saying like ‘imagine this’ or ‘imagine that’.

“Imagine could never have been written without her. And I know she helped on a lot of the lyrics but I wasn’t man enough to let her have credit for it.

“So that song was actually written by John and Yoko, but I was still selfish enough and unaware enough to take her contribution without acknowledging it. The song itself expresses what I’d learned through being with Yoko and my own feelings on it.”

Yoko was eventually given an official writing credit for Imagine in 2017.

The surprise announcement was made at an annual meeting of the National Music Publishers Association in New York in June 2017.

They explained the change after playing a clip of Lennon saying his wife should have had credit to begin with.

The clip showed the star saying: “It should really have said Lennon/Ono on that song, because she contributed to a lot of that song.”

Ono and Lennon’s son, Sean Ono Lennon, also commented on the credit being given to his mother after 40 years.

He said: “When they officially acknowledged – through my father’s account – that my mother co-wrote Imagine, the song of the century, it may have been the happiest day of mine and [my] mother’s life.”

Ono later described her own thoughts behind the concept of imagining a better future.

She said: “George Orwell and all these guys have projected very negative views of the future. And imagining a projection is a very strong magic power. I mean that.”

Ono continued: “That’s the way society was created. And so, because they’re setting up all these negative images, that’s gonna create the society.

“So we were trying to create a more positive image, which is, of course, gonna set up another kind of society.”

When the single for Imagine was released in October 1971 it reached number one in five countries, including the USA, Canada and Australia.

Since its release, Imagine has sole more than 21 million records worldwide.

Imagine has also been covered by many iconic music industry artists.

Not only has it been sung by the likes of Madonna, Stevie Wonder and Joan Baez, it was also performed by Diana Ross and Elton John.

Imagine was also featured in the 2012 Summer Olympics in London, prompting it to reach number 18 in the charts for the first time since its release.