A secret project to increase the odds of the Wollemi pine surviving in the wild has won international recognition from conservation groups hoping the lessons learnt will help pull other threatened species back from the brink of extinction.

The award to the Wollemi Pine Recovery Team by the National Geographic Society and the International Union for Conservation of Nation (IUCN) will support efforts already under way to plant the critically endangered tree in new parts of the Wollemi National Park north-west of Sydney. 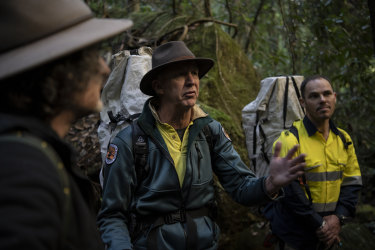 David Crust (centre), the director of the Blue Mountains division of the NSW National Parks and Wildlife Service, discusses replanting efforts for the Wollemi pine, with Berin Mackenzie (right) a parks ecologist and Atticus Fleming, deputy secretary of the service.

Details of the recognition, including the grant of almost $US50,000 ($63,000), have been kept under wraps, as has the translocation project for the so-called “dinosaur trees” itself.

The Herald and The Age can reveal that a dedicated team has been planting seedlings since 2019 in two secret locations to increase the chances that the pines can survive in the wild against threats such as the spread of potentially deadly invasive pathogens and climate change making fires worse.

“It’s not only going to raise the profile of the work we’re doing but help [reach] a much broader audience,” said Berin Mackenzie, an ecologist with the Department of Planning, Industry and Environment’s conservation unit. “That grant came at just the right time to enable all of that [work] to go ahead.“

The effort has been remarkable, from identifying suitable sites to the planting and then replanting of pines after the 2019-20 Black Summer bushfires burnt both remote locations and also threatened the original groves.

NSW Environment Minister Matt Kean said the grant, the first for recovery efforts given Australian projects by the two organisations, was exciting.

“This is a huge effort, using our best science, human ingenuity and expert opinion to give this critically endangered and rare plant a bright future,” Mr Kean said. “It’s another weapon in our arsenal to make sure this species survives.” 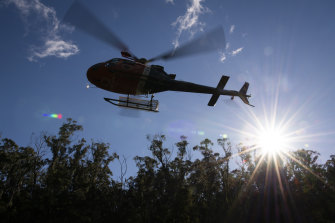 A National Parks and Wildlife Service helicopter departs after dropping a planting team at one of the wild translocation sites for the pines.

Cathy Offord, a principal research scientist at the Australian Botanic Garden at Mount Annan who has been involved in the propagation of the pines since soon after their discovery in 1994, said individual trees could be tens of thousands of years old and the study of them will help other plants.

“We’ve learnt a lot from the Wollemi pine,” Dr Offord said. “It’s helping us to understand a lot about the process of returning plants to the wild or to establish new populations.”

The recent bushfires added to the importance of the project, Luisa Arnedo, senior program officer with National Geographic, said.

“This was a compelling project … because the species was only described in the 1990s, and it has crucial evolutionary significance since its lineage goes back 200 million years,” Dr Arnedo said. “We are also aware of the devastating fires in Australia in [2019-20], which also made supporting this project more urgent.”

Jon Paul Rodriguez, the Venezuela-based chair of IUCN’s Species Survival Commission, said the project was chosen among more than 200 applications, and was “one of the best proposals”.

“The kind of insurance policy that’s being developed, that’s getting people’s attention, is just fantastic and we need more of that,” Dr Rodriguez said.

The other two Australian projects selected for grants were a project to increase the population size of the critically endangered red handfish in Tasmania by Jemina Stuart-Smith and one by Isabel Hyman to save Norfolk Island’s similarly endangered land snails through improved habitat management and captive breeding.