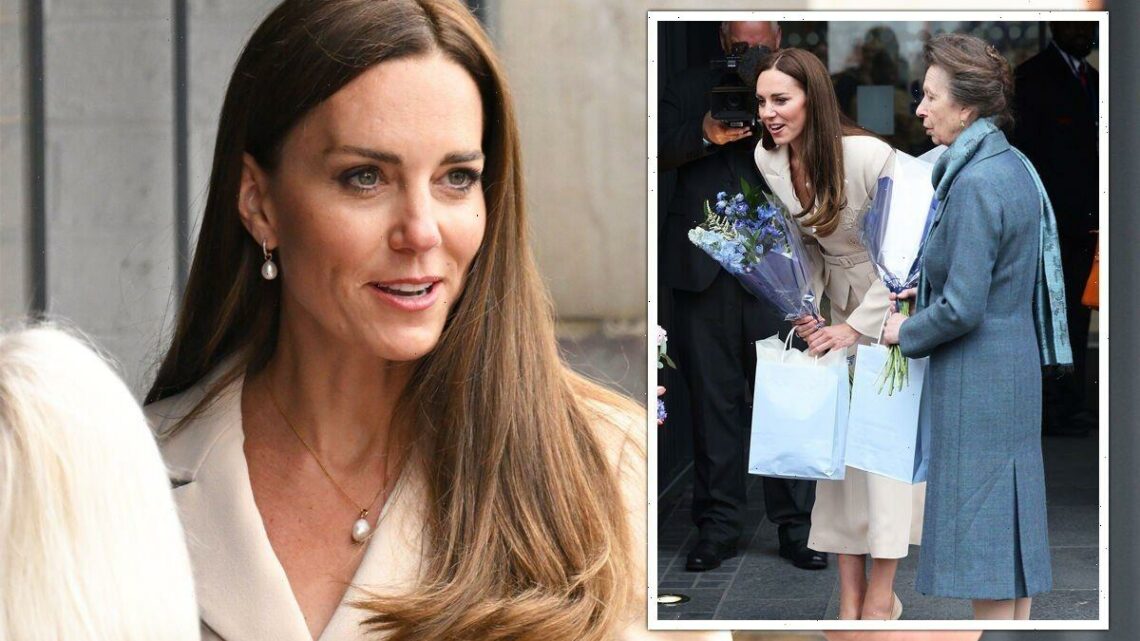 Kate and Annes similar goal: Royal allies are very much in alignment amid huge first

The pair combined their joint interest to hear about maternal health care.

Body language expert Mark Bowden analysed the pair and commented on their “alignment”.

Mark is the co-founder of Truthplace, which teaches public speaking skills.

He said: “This pair are very much in alignment and congruence with each other.

“Notice how they very quickly walk in sync with each other. They stop and start together. Stand side by side.

“They most often look and focus in the same direction, and on the same people and together – taking a similar stance when observing and listening.”

Mark is the author of Truth & Lies: What People Are Really Thinking, which has been described by former FBI counterintelligence agent Joe Navarro as “this year’s must-read on nonverbal communications and human behavior.”

He pointed out elements of Kate and Anne’s behaviour suggesting they have a “similar goal”.

He said: “They also shift and move on the spot at the same moments and at the same tempo.

“This suggests something of a similar goal and temperament in this situation of work and duty.”

However, Mark – who is a member of the popular YouTube channel The Behavior Panel, boasting over half a million followers, also pointed out a difference between the royals’ behaviour.

He noted one body language quirk which suggests similarities between Kate and the late Princess Diana.

He said: “The biggest difference may be how Kate lowers herself when talking to children, coming more to their eye level and lowering her height, dominance, and so status.

“This shows similarities in behavior to her husband’s mother, Diana.”

Heading into the Platinum Jubilee year, Ipsos research showed the Duchess of Cambridge is the second most popular royal coming in only after Queen Elizabeth II herself.

Both Kate and Anne are mothers. Kate has three children, Prince George, eight, Princess Charlotte, seven, and Prince Louis, four. Princess Anne is a mother of two to Zara Tindall, 40, and Peter Phillips, 44.

Prince Harry, 37, and his wife, 40, flew to The Hague in the Netherlands at the Olympics-style event for wounded veterans known as The Invictus Games.

The former actress introduced Prince Harry before handing over to him on stage.

Harry walked onto the stage and the pair shared a kiss before the royal said: “Thank you, my love.”