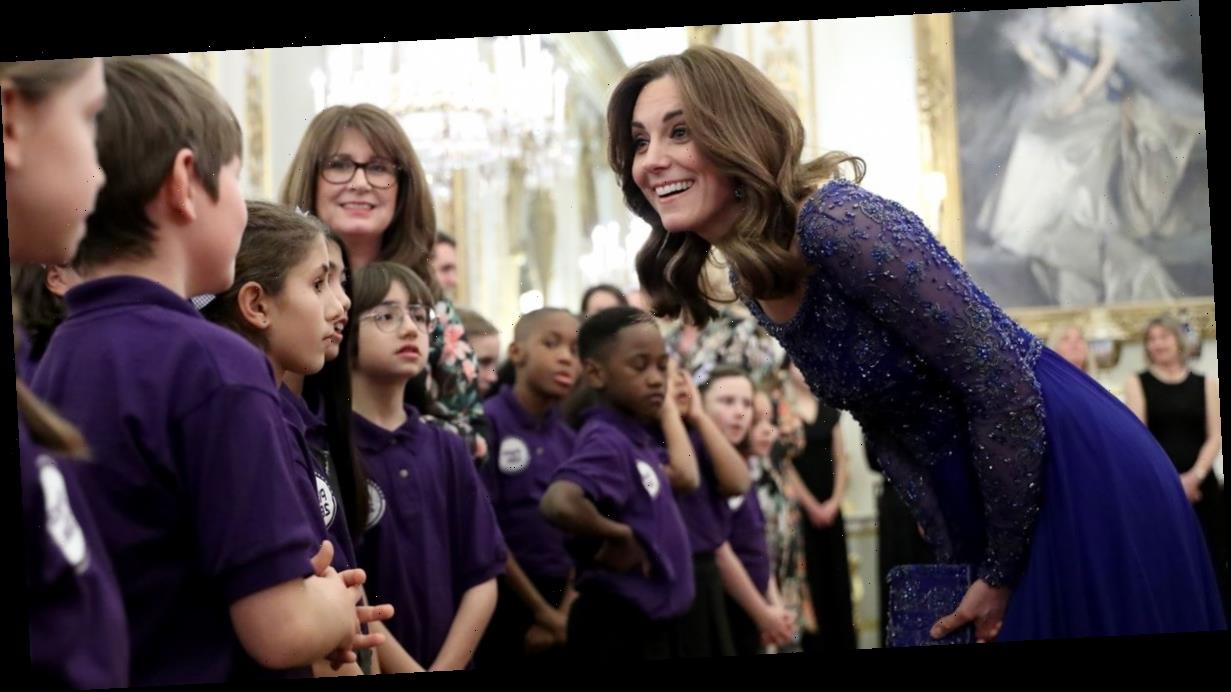 The Duchess chatted to schoolchildren as she hosted the dinner at Buckingham Palace in honour of charity, Place2be, celebrating its 25th anniversary.

Kate, wearing a royal blue gown by Jenny Packham with embellishment detailing and a matching clutch bag, was greeted by teachers and children from Cranbrook School, the New North Academy and Salusbury Primary School.

The mum-of-three, who has made children's right and mental health a staple part of her work as a royal, has been patron of Place2Be since 2013.

She told the anniversary event that the charity had taught her that the "simplest things" can make a difference to a child's wellbeing.

"You taught me, right from the start, that the children in your schools are only as happy and emotionally strong as the adults in their care," the duchess said.

"That is why you take such great pride in the work you do with your teachers and your parents.

"You taught me the importance of creating safe and nurturing environments within schools, embracing a holistic view of emotional wellbeing which permeates through the whole school system.

"You also taught me that it's the simplest things that make a difference to children.

It's the quality time that is spent with them. It's the time you take to listen to them.

"It is trusting relationships that have the most profound impact on the emotional and mental wellbeing of a child."

Kate told the event there was now a "much greater awareness" of children's mental health, adding that Place2Be's services have "never been more needed".

She said: "I can remember saying after my visit to Willows School in 2013 that I thought every school in this country should have Place2Be.

"Imagine the difference it would make to thousands, if not millions, more children, teachers and parents, if this vision was a reality."

Founded in 1994 by Dame Benny Refson, the charity has worked with more than 250,000 children and families over the past 25 years.

This year’s theme was Find Your Brave – highlighting that bravery isn’t about coping alone or holding things in, it can be about sharing worries and asking for help, trying something new or pushing yourself outside your comfort zone.

Earlier in the day, Kate attended the annual Commonwealth service at Westminster Abbey.

She wore a red coat by Catherine Walker and hat by Sally-Ann Provan.

The service at Westminster Abbey marked the final royal engagement for Meghan and Harry before they embark on their new life in North America.

However they were not part of the Queen's procession , as they were last year, and were shown to their seats with the rest of the guests.

The  Duke and Duchess of Cambridge also skipped the formal entrance  in a last minute change to plans, made after the order of services were printed.

Meghan looked stunning in emerald green Emilia Wickstead for her final royal engagement and chatted to guests and met with children after the service.

At today's event, the Sussexes and Cambridges were not sat on the same row.

Meghan was seen to mouth “hi” and give a small wave to William and Kate, followed by a “hello”, as the Cambridges took their seat in the High Altar in the row in front of the Sussexes.

After the service, Meghan and Harry appeared to keep their distance from Kate and William, as they met with guests including  Anthony Joshua  and Craig David.

Camilla Luddington's Pregnancy News: Will Grey's Anatomy Write It In?

Inside Italy’s quarantine zone amid the coronavirus outbreak
Recent Posts