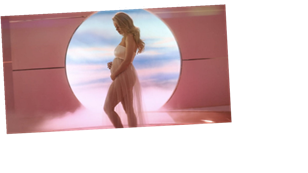 Talk about a surprise reveal! Katy Perry sent fans into a frenzy on Wednesday when she teased the music video for her new single “Never Worn White” with a clip of her cradling a baby bump. When the video dropped at midnight on Thursday, not only did the singer reveal that the bump is, in fact, real, but she also showed a vulnerable side to herself with the soft, intimate single presumably about her partner, Orlando Bloom.

The video is simple, yet ethereal, with Perry appearing in two looks: one resembling Mother Nature and covered from head to toe in flowers and the other simply dressed in all white as she cradles her growing belly. It’s a beautiful ode to motherhood and new life, which Perry seems happy to embrace with her fiancé. As the singer tweeted out with the release of the video, it’s going to be a jam-packed Summer. Watch the video above!