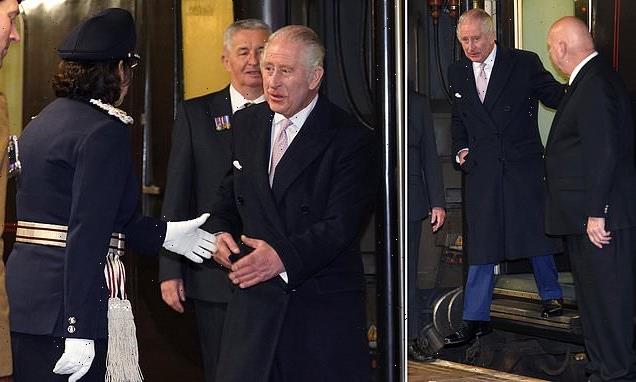 King Charles makes his first trip on the royal train

All aboard! King Charles makes his first trip on the royal train to visit Manchester (after travelling overnight in rather sparse quarters)

The King has used the royal train for the first time since starting his reign, travelling to the city of Manchester.

Charles journeyed overnight from Ayr in Scotland, close to where the 18th-century property Dumfries House, part of The Prince’s Foundation, is based.

A group of local dignitaries were waiting to greet the King, who looked relaxed as he stepped from the locomotive. 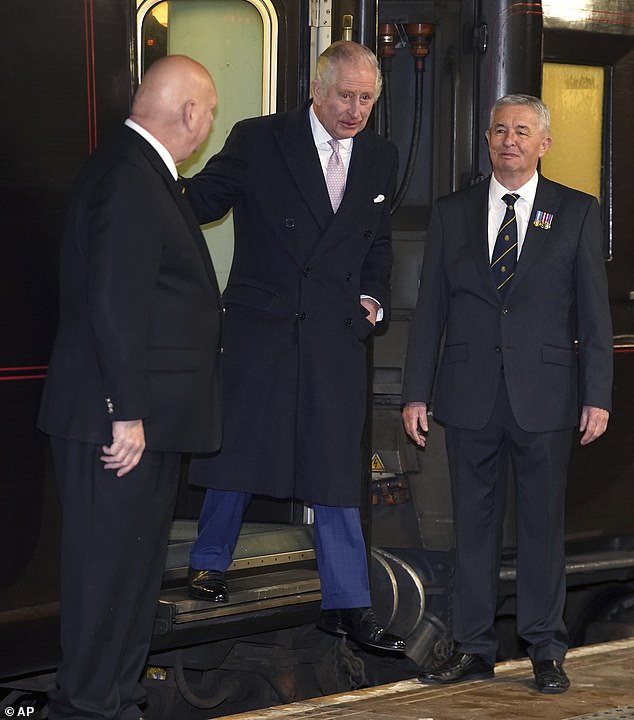 Queen Victoria was the first monarch to travel by train, leaving Slough at noon on June 13 1842 and travelling to London’s Paddington Station.

Victoria had been persuaded on board by Prince Albert, a veteran of rail travel fascinated by the new technology.

Since the Victorian era, the royal family has enjoyed its own train, with the present royal carriages coming into service for the Queen’s Silver Jubilee in 1977

The King donned tailored navy trousers which he paired with a white shirt and a pale pink tie.

The Queen Consort, Camilla, is also due to join the King as he spends the day visiting the city.

King Charles visited the Kellog’s factory and was greeted by the factory director Tim McKnight.

It comes after Prince Albert of Monaco became the first European royal to confirm their attendance at King Charles’ coronation later this year. 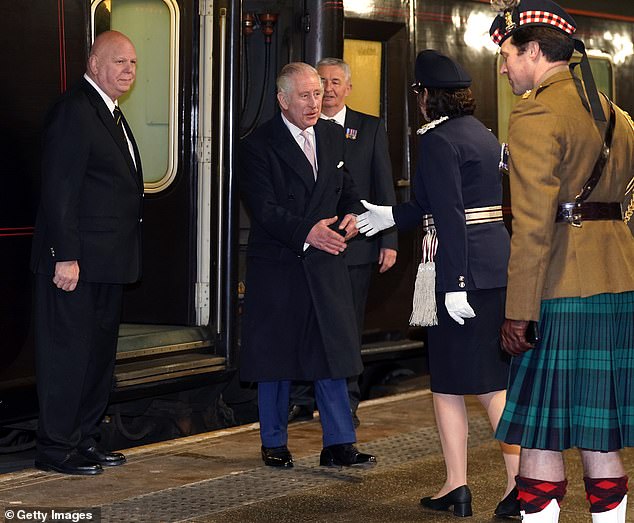 His Majesty, 74, appeared in great spirits as he disembarked at Manchester Victoria Station on Friday 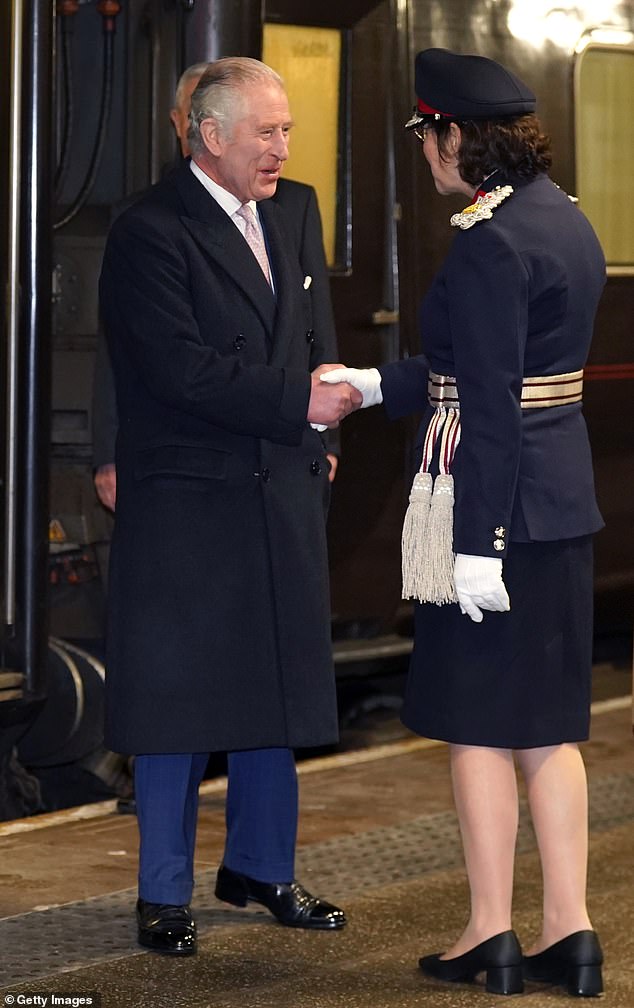 Monaco’s crown prince, 64, spoke fondly of the King ahead of his 6 May coronation, calling him ‘a very educated man and someone with a great sense of humour’.

Speaking to PEOPLE, Albert confirmed he and his wife Princess Charlene would attend, adding: ‘I’m certain that it’s going to be an incredible ceremony and a very moving one.’

The event will be amongst the highest profile attended by Charlene since her recent illness, which saw her spending 11 months away from the Mediterranean principality in her native South Africa, undergoing treatment for an unspecified condition.

Albert added: ‘We’ve maintained contact since His Majesty became King, but I haven’t talked to him personally since the Queen’s funeral.’ 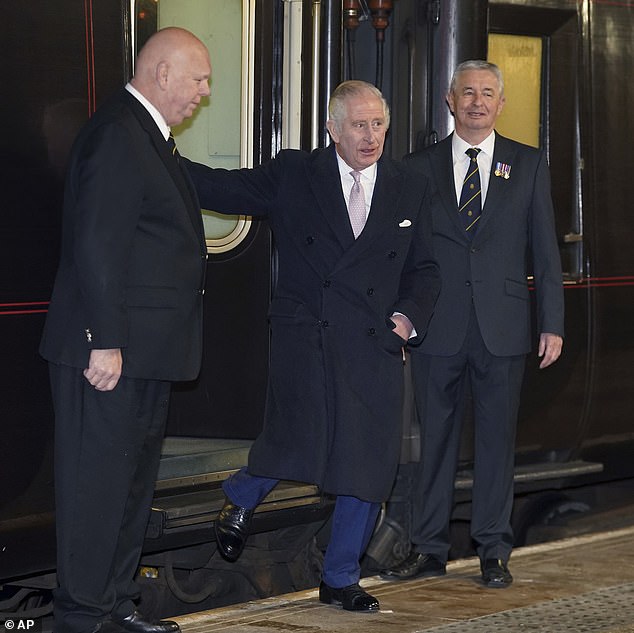 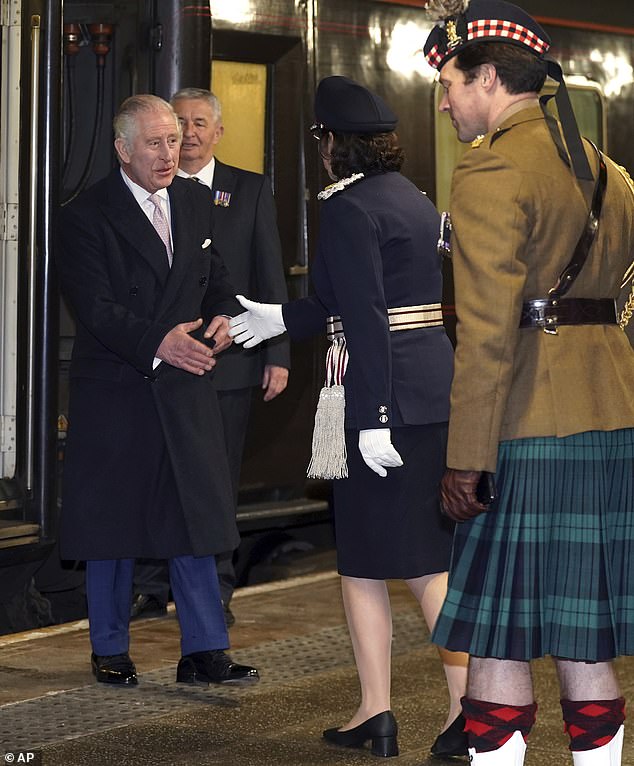 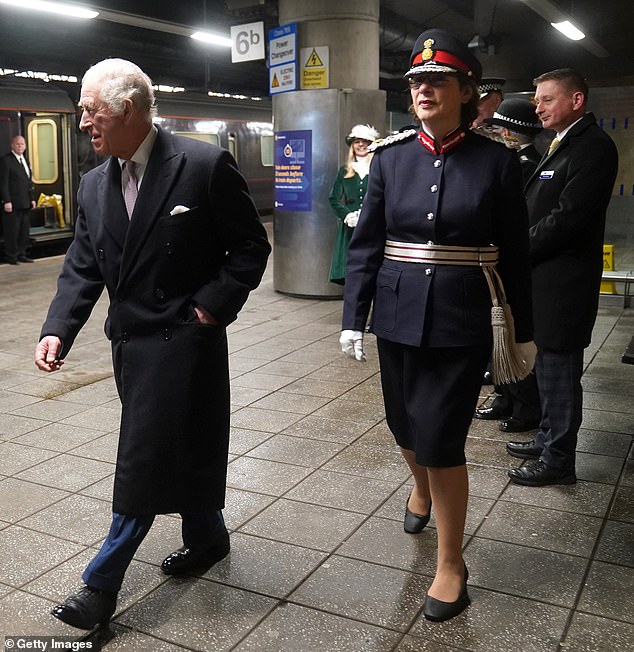 He beamed as he left the station with a member of staff, who donned a smart navy uniform and hat

The prince, who is looking forward to attending the king’s coronation, added: ‘I’m certain His Majesty will add his own ‘personal touches’ to the ceremonies, but what those will be, I’m sure I don’t know.’

Prince Albert went onto reveal that himself and his wife Princess Charlene, will definitely be at the ceremony to watch the king’s crowning, however their 8-year-old twins Hereditary Prince Jacques and Princess Gabriella might be ‘too young’.

News of the couple’s attendance comes after Prince Albert praised his wife, Princess Charlene, for ‘turning it around in an incredible way’ after a long-running health battle.

Speaking in December, the 64-year-old royal told People he was ‘really proud of my wife,’ adding: ‘Charlene’s doing really well.’

He continued: ‘As you know, last year was a very tough year for her – and the beginning of this year.’

Albert added that after being admitted to a Swiss treatment facility for exhaustion and keeping out of the limelight, Charlene, 44, has been ‘active in any number of different events.’

He highlighted a number of events where the former Olympic swimmer had been visible at lately, including a recent outing to the Monaco branch of the Red Cross.