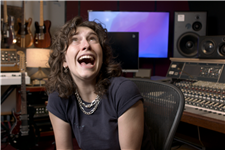 In the lead-up to the new Pride-themed digital cover launch, singer-songwriter King Princess sat down with ‘Rolling Stone on Twitch’ host, Charlie Cooper, to discuss the new album, pronouns, and her favorite music during a special “dream mixtape” segment, wherein the pair built a custom playlist for fans to share.

Kicking off the discussion in her traditionally laid back fashion, King Princess deftly navigated the prompts with quick selections including Nicki Minaj’s ‘Yikes,’ Kate Bush’s ‘Wuthering Heights,’ and even Lou Reed’s ‘Satellite of Love’ – a favorite from her vinyl collection as a child – before hitting a wall.

The artist wryly bemoaned, “I don’t listen to that much music to be honest, I’m definitely the wrong person to have this dream mixtape. It’s like a nightmare mixtape – that’s what I’m creating for you.”

The United States of Weed

“KP” ultimately admitted that she prefers to watch various The Real Housewives series to unwind, including ancillary materials like The Bravo Docket, a podcast where two practicing attorneys dissect the various drama and legal woes of reality stars.

Watch the full interview below.

In the second half of the discussion, KP upheld the skeptical, but game demeanor for a segment called “Google Me, Baby,” inspired by her forthcoming album ‘Hold On, Baby.’ Digging into questions springing from commonly searched terms, she was quick to joke about her relevance, saying “People are like, ‘has this person made an album? They’re like album, question mark?’”

On the topics of pronouns and gender, King Princess said, “I knew I was gay, but I think before I knew I was gay I just that I wasn’t necessarily – I didn’t fit into the body I was assigned.” She continued, “And as far as pronouns – the pronoun situation in my life is never… I’ve never felt offended. He. She. It. They. Xenu.”

She concluded jokingly, “Don’t refer to me at all. I don’t want to be referred to at all.”

To see full-length interviews and to participate in live Q&As, tune-in to Rolling Stone on Twitch weekdays from 4 p.m. – 6 p.m. EDT. Follow us on Twitch to become part of the story in the chat, and subscribe for exclusive members-only bonuses. To continue the chat 24/7, join our Discord server.