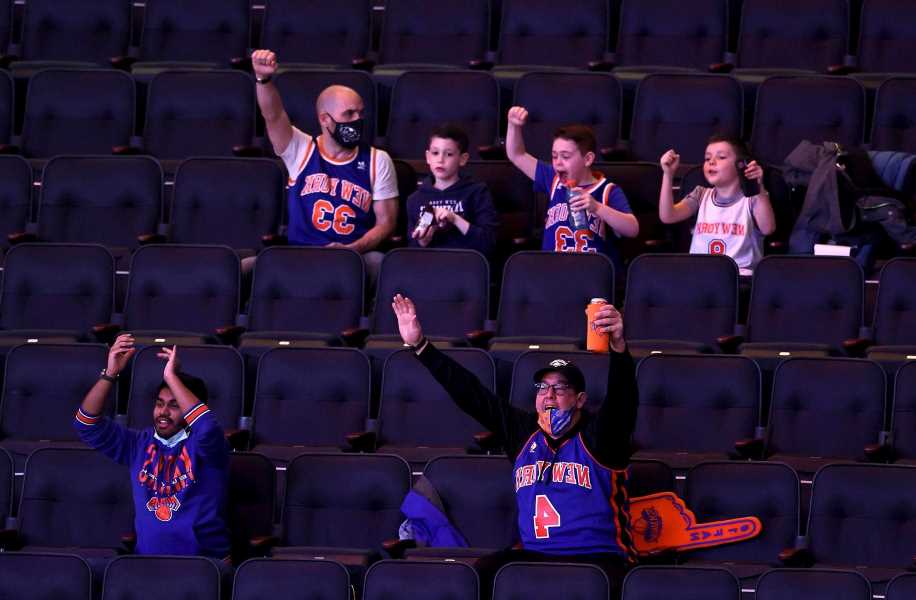 Knicks rookie may be demoted in playoffs

Veteran’s playoff experience will be crucial for Knicks

Knicks, Nets can bring city back to playoff zenith

The Knicks are now as cool as Miles Davis.

The 15,000 fans who will jam into the Garden on Sunday night for the Knicks’ first playoff game in eight years will agree.

After the Nets’ Kevin Durant dismissed the Knicks last September as no longer “cool,’’ Tom Thibodeau’s tigers of defense smashed that theory to bits during a 41-31 regular season.

The Hawks, though slightly favored by Las Vegas to win the first-round series, will get a taste of the Knicks’ smash-mouth defense before the largest Garden crowd in 14 months.

“It’s been electric in there even with 2,000,’’ Knicks defensive shot-blocking center Nerlens Noel said. “I’m super excited to get more. I think it’ll be a great atmosphere for us. The fans are going to bring it at a high level. It’s been eight years. They’re definitely living in the moment right now. They’re capturing it and seizing it. Us as a collective unit need to give them what they want to be our sixth man to push us through.’’

The Knicks defended their home court fiercely in 2020-21, posting a 25-11 record at the Garden. The past 22 home games allowed fans, though at 1,980 capacity. They made a racket in a mostly empty arena with chants of “MVP’’ for Julius Randle and “D-fense.” But Sunday figures to be earsplitting straight out of the 1990’s playoff runs Thibodeau helped preside over as Jeff Van Gundy’s star assistant.

The World’s Most Famous Arena will rock early, but the Knicks need to keep the fans rocking. Earlier this month, in a loss in Phoenix, the Knicks experienced what a large, frenzied home-court crowd could do when the Suns rolled over them in a fourth-quarter rampage. That game was played before the NBA’s largest crowd of the regular season: 8,063.

“The bigger adjustment was playing without the fans,’’ Thibodeau said Friday. “Everyone’s used to playing with the fans. We’re excited. Toward the end we saw more fans in the building. Sometimes you don’t realize how much you miss them. I know when we played in Phoenix, they had a great crowd and it was great to see things getting back to normal. We feel we have the best fans in the world. Obviously we have the most famous arena and we know what the Knicks mean to the city.’’

In a can-you-top-this response to the Garden enlarging its projected capacity three times since last weekend, the Hawks announced Saturday they will increase their 7,500 capacity to between 15,500-16,200 beginning with Game 3 on Friday.

Though the pandemic precautions may be ending, the Knicks are hoping Randle’s greatness continues after he posted arguably the best regular season ever by a Knicks player.

“Don’t matter man,’’ Randle said. “We got Game 1 coming up on Sunday. I just got to be prepared for whatever comes at me and they throw my way, make the right plays and be aggressive.’’

The Knicks were 3-0 versus the Hawks this season — mostly due to Randle’s dominance.

“I think it starts at the head of the snake,’’ Albany-area native and Hawks swingman Kevin Huerter told The Post. “We got to figure out a way to deal with Randle. Those three games, he averaged 37 points on us. If we allow him to do that, it’ s going to be a long series.’’

The Hawks are loaded with shooters in Huerter, Bogdan Bogdanovic, Danilo Gallinari and Lou Williams, but they are nothing without their star point guard Trae Young, who has become a better decision-maker under coach Nate McMillan. The Hawks went 27-11 after McMillan took over on March 1.

Young will be making his playoff debut, as will the Knicks’ Randle and RJ Barrett.

“This is the challenge for Trae to overcome — all the obstacles the Knicks throw at him,’’ one NBA scout said. “This is his chance to go from All-Star to something very special’’

The Knicks led the NBA in opponent scoring average, opponent field goal percentage and opponent 3-point percentage. And in unsung fashion, they wound up third in offensive 3-point shooting percentage. They finished out the season on a three-game winning streak and a 16-4 spree.

If point guard Derrick Rose continues to play like he’s 22 again and Barrett isn’t streaky, the Hawks’ talent advantage would be mitigated.

“We want to be playing our best down the stretch,’’ Thibodeau said. “I think we are. But this is a different animal when we get to the playoffs. Our focus, concentration and togetherness has to be great.’’

Noel Clarke’s ‘Bulletproof’ Axed Amid Sexual Misconduct Allegations Against Him