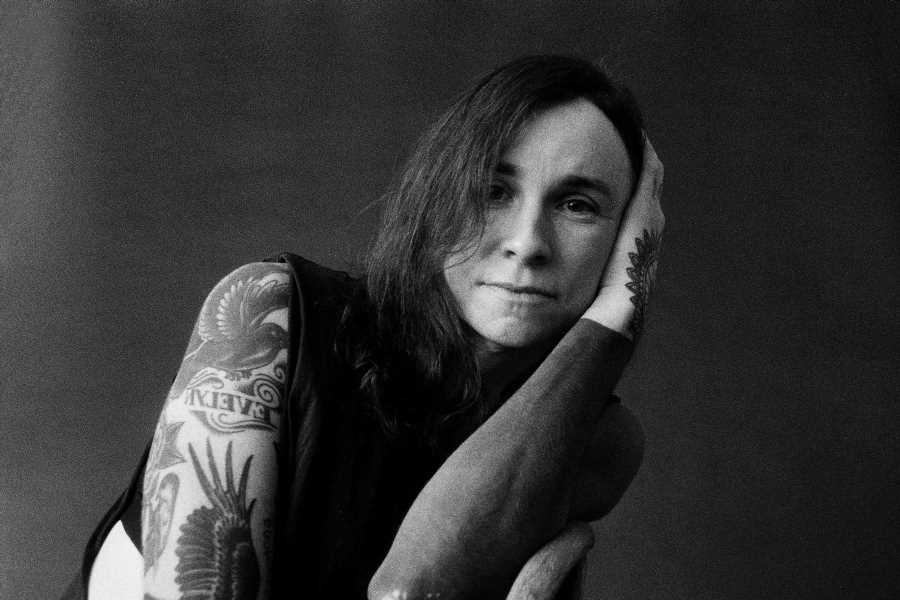 Standing on a makeshift stage surrounded by shrubbery, the smell of cedar chips lacing the humid summer air, Laura Jane Grace addressed the sold-out crowd that had shambled through the industrial wasteland of the Philadelphia outskirts to see her play a pretty unconventional venue: Four Seasons Total Landscaping.

“I’ve performed at big arenas, at Wembley Stadium,” she said Saturday afternoon, holding just an acoustic guitar that would fill in for her band. “I sang onstage with Cyndi Lauper, written songs with Weezer, been onstage with Joan Jett, none of that compares to this.” The crowd laughed and roared, an assemblage of punks of all ages in black, band shirts, Vans, and neon hair — smiling. “I’m 40 years old, and I can draw a bigger crowd than Rudy [Giuliani], and I have more Twitter followers than Donald Fucking Trump, which isn’t fucking so bad for a transgender high school dropout.”

Her fingers dug into her guitar as she kicked off her set with “True Trans Soul Rebel,” off Against Me’s 2014’s Transgender Dysphoria Blues. The crowd sang along to the chorus like part of the band — “Does God bless your transsexual heart?/True trans soul rebel” — like they’d been waiting for this moment. And, in many ways, they have.

Last November, the scene here at Four Seasons Total Landscaping was decidedly bleaker. There was then-President Donald Trump’s attorney, former New York Mayor Rudy Giuliani, blathering about voter fraud in front of the rolling garage door of a modest landscaping business as part of a press conference that birthed a series of ever-more-annoying memes.

We all suspected that Trump and his cronies had booked the place accidentally, instead intending to hold their presser at the Four Seasons Hotel in Philly; Trump, as usual, played the role of the naked emperor insisting on the superior quality of his clothes. The whole thing was pretty funny for a while — especially as the venue was located between a crematorium and an adult bookstore, a grotesque circle of life — but as Trump and Co. continued to rail against the electoral college, it all just became, for lack of a better phrase, a massive bummer. The world was burning and no matter how much sage we threw on the pyre, there was no respite from the stink.

This latest stunt could have struck a clunky chord, like the now-too-trodden phrase “Cheeto Mussolini” or a kicked-to-death joke about tiny hands. There was a cut-out of Rudy you could mug with and, of course, official merch. Inside, there was even a framed printout of Trump’s now-infamous tweet: “Big press conference today in Philadelphia at Four Seasons Total Landscaping!” Instead, the whole affair was cleansing; a banishing of bad energy — out with the bad vibes, in with the good.

This was Grace’s second live show since the pandemic and, despite playing on a stage situated near a wall of wheelbarrows, she performed like she was in a stadium. She gave the diehard fans in the crowd — which, let’s face it, was everyone — what they wanted: Against Me! classics like “Pints of Guinness Make You Strong,” “Reinventing Axel Rose,” and “Sink, Florida, Sink,” as well as tracks from her various side projects, like Laura Jane Grace and the Devouring Mothers’ “Reality Bites.”

She also played a liberal number of tracks from her latest solo album, Stay Alive, which she recorded during the early days of the pandemic in between taking marathon baths and hating Zoom calls. “Hanging Tree,” especially, hit home given the setting. Grace wrote that song in 2017 about Trump and where he derives his power.” The ultimate conclusion is that he doesn’t have any kind of soul, and if you don’t have any kind of soul, then you don’t have any soul to lose. That’s where I think his power comes from. He’s the fucking antichrist,” she told Rolling Stone before the record’s October 2020 release. And that’s a sentiment the crowd could certainly get behind as they roared along with Grace, “God is good and God is great/Now get the fuck out of the USA!”

And then there were the moments of giddy levity, best encapsulated in a new song Grace introduced called “All Fucked Out.” She wrote the track a few weeks ago, she said, after deciding to write a tune similar to whatever the number-one hit in the country was at the time: BTS’ “Butter,” as it turned out. While the pop band sings that they’re “smooth like butter,” Grace’s song is a sing-songy bit of quasi-country humor in which she proclaims: “I’m dry like bread/stale and crusty/I got just the ends left/I’m all fucked out.”

There was plenty of angst about the state of the world, sure — Grace dedicated “Osama bin Laden as the Crucified Christ” to the “death of fascists” — and fear of Covid-19 was still there, physically, in the masks audience members wore emblazoned with Grace’s newest album title doing double duty as a warning: “Stay Alive.” But seeing Grace onstage lifted the gloom for a few hours — even as the storm clouds of Hurricane Henri hovered on the horizon. When she ripped into “Black Me Out,” the cardboard Guiliani made its way into the crowd, surfing across a sea of hands, a final gasp of an old joke sacrificed to the euphoria of live music.

Broad or posh, we still sound uniquely Australian. Where did our accent come from?
Recent Posts