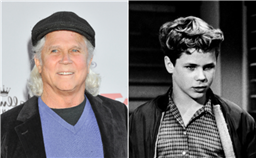 Tony Dow, the actor who starred as Wally Cleaver on “Leave It to Beaver,” has once again been diagnosed with cancer. Dow’s wife, Lauren Shulkind, broke the news on the actor’s official Facebook page. The specifics of Dow’s cancer diagnoses were not disclosed.

“Dear friends and fans of Tony Dow, I have some very sad news to share with you,” Shulkind wrote on Facebook. “Unfortunately, Tony has once again been diagnosed with cancer. He is approaching this reality so bravely, but it is truly heartbreaking. We want to thank you in advance for your caring thoughts. Our Love, Lauren & Tony.”

Dow starred in the series regular role of Wally Cleaver on “Leave It to Beaver” for all six seasons of the show, which started its run on CBS before moving over to ABC. The show ran for 234 episodes between 1957 and 1963. Dow starred in the series opposite Jerry Mathers as Wally’s younger brother, Theodore “The Beaver” Cleaver, and Barbara Billingsley and Hugh Beaumont as the boys’ parents, June and Ward Cleaver. Dow participated in the show’s 1983 TV reunion movie “Still the Beaver” and its four-season sequel series, “The New Leave It to Beaver.”

In addition to his tenure as Wally Cleaver, Dow also starred on television series such as “My Three Sons” and “Lassie.” Dow was also a television director, having helmed episodes for series such as “Babylon 5,” “Star Trek: Deep Space,” “Nine” and “Coach.” The actor was hospitalized in August 2021 with pneumonia but told fans he was in “good spirits.” The actor celebrated his 77th birthday last month.

'This Is Us': Milo Ventimiglia Says Fans Will See 'Different Versions' of Jack Before the Series Ends
Recent Posts