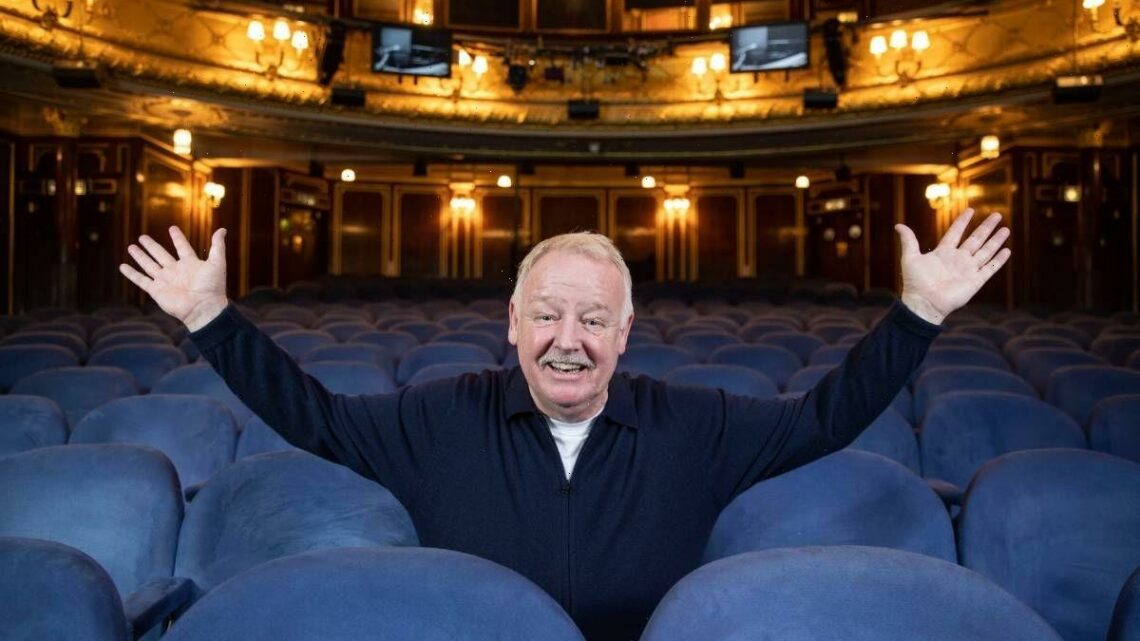 Les Dennis is back in his element adoring crowds in musical 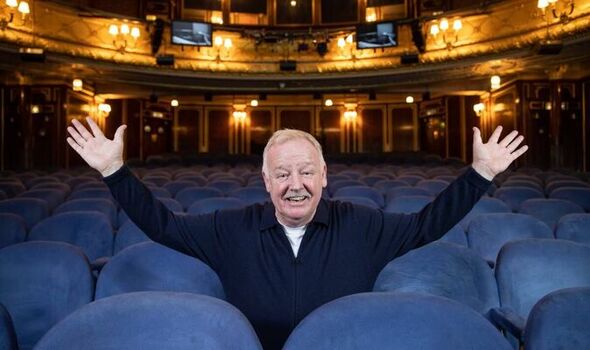 “It’s so important we make sure that, as well as following English and maths on the curriculum, our kids learn to love the creative arts.” Les has a daughter Eleanor, 14, and an 11-year-old son Tom. He says they both love their school work but it’s the school play they particularly look forward to.

“And long may that continue. I heard drama was possibly not going to be a subject taught at school anymore, and I really feel it should be.”

“Hitting his rhetoricalable to go experience arts stride now, the 69-year-old continues: “Culture gives us a myriad of different things to enjoy. Just recently I’ve been rereading Arthur Miller’s play A View From The Bridge because my daughter is doing an essay on it.

“It’s a wonderful, beautiful play based on Greek tragedy. Plays like that make us laugh, they make us cry, and they also make us discuss the world we’re living in.”

During the Covid lockdowns, the Government appeared to offer very little support to people working in the arts.

“There was a time during the pandemic when performers were told to go and retrain, which didn’t go down very well with people in the theatre industry,” he points out.

“In a government advert, a ballet dancer was being told that she should retrain as an IT worker. There was a lovely thing I saw on Twitter at the time. The Beatles were crossing Abby Road, but John Lennon was going the other way. People were asking him, ‘Where are you going, John?’ and he said, ‘I’m going to retrain in IT’ – imagine that!”

After a long period when the theatres were forced to close and Les was unable to indulge his first love – live performance – he was delighted to be back in front of an audience last year when he co-starred in two critically-acclaimed shows for the English National Opera.

“I was resident at the London Coliseum from May until December, because I did Hairspray with Michael Ball, and then I stayed on to do HMS Pinafore,” he recalls.

“When we opened Hairspray, we were only allowed a thousand people in a 2,300-seater, and we thought we’d probably not get the same kind of response as we did before the pandemic. But we were astounded at the reaction of people who were just so thrilled to be back there.”

He continues: “We proved that people want culture, they want to be able to go out and experience the arts and live music. They were just happy to be back.”

Sadly, the future for some arts companies looks bleak in the current financial climate.

Earlier this month, Arts Council England revealed it is severely reducing its funding of many famous arts institutions. The annual £12.6million grant for Les’s beloved English National Opera, for example, will be axed and replaced by a £17million fund, but across three years.

Despite gloomy predictions among pundits, Les believes the arts remain crucial and vital and adored by audiences.

As if to prove the point, he’s now starring as Grandad in Only Fools And Horses The Musical opposite Tom Bennett (as DelBoy) and Ryan Hutton (Rodney).

The show opened to acclaim three years ago and – despite the privations of lockdown – continues to play to packed houses in London’s West End.

Les says the barometer of its popularity is the reaction of his friends. “People are calling me all the time, asking, How do I get tickets?”

Enormously popular with both critics and the public, the musical is written by Fast Show star Paul Whitehouse, who first played Grandad, and Jim Sullivan, the son of the original sitcom’s creator, John.

Les’s children, though, initially had no idea what their father was starring in. “When I told my kids I was doing Only Fools, they asked, ‘What’s that?'” he recalls with a smile.

The star quickly introduced them to the much-loved sitcom. “I showed them all the classic clips like the chandelier dropping, Del Boy falling through the bar, and the Batman and Robin episode – and they loved them,” he remembers.

“On a Sunday afternoon, we watch old episodes. They are fascinated by it.” Les, who has been married to his wife Claire since 2009, has a theory as to why Only Fools grips all generations of viewers. “I think it is that theme of the close family,” he explains.

“There is a lovely joke in the show where Rodney says to Del, ‘Why do you care for me?’ and Del replies, ‘Because you’re my brother. And you never know when you might need a bit of bone marrow.’

“The idea is that, ‘I’ll joke around with you and I’ll rib you,’ but underneath there’s this absolute positive love in the Trotter family. What Paul and Jim intended was to capture every element of the TV show, but also to get that pathos of the Trotter family. They are that dysfunctional family which absolutely loves and cares for each other.

Les thinks audiences also revel in “Del Boy’s optimism and his attitude that, ‘This time next year, we’ll be millionaires’.” He adds: “It’s almost the American Dream. It’s the Peckham Dream!”

Now that the pandemic is over, British audiences are lapping up the unalloyed joy of live theatre. “I think it’s the kind of show we need right now. It takes us away from everything that’s going on and the worries we have. People want that kind of escapism.

“I love all the very heavy and dramatic pieces in our theatrical history. But if I was to take my family out right now, I’d choose to go and see something light and funny like Only Fools.”

The end of each performance, Les and his fellow actors notice just how exuberant their audience is. “We’re a very close company, so we enjoy that reaction and then we all go for a drink together. We’ve found a pub near the theatre, but sadly it’s not called The Nag’s Head.”

The catchphrases that pop up regularly in the musical are particularly popular. As well as “Lovely jubbly” the audience can enjoy “You plonker!”, “You dipstick!”, “cushty”, “pukka”, “He who dares, wins”, and “This time next year we’ll be millionaires”.

Also featured are well-loved staples such as Del Boy falling through the bar, the crashing chandelier and Del’s battered old yellow Reliant Robin. Playing Grandad, Les is clearly having the time of his life.

The actor relishes the character’s lovable misunderstandings – when he confuses the microwave for the TV, for example, or when Del Boy tries to explain what a CEO is, and Grandad helpfully interjects: “Everyone knows it’s a flying saucer.”

When Grandad later vacates his beloved armchair and leads the company in a riotous knees-up at The Nag’s Head to the song Where Have All The Cockneys Gone? he is greeted with a rapturous round of applause.

During a 50-year career, Les has achieved everything from presenting game shows, costarring opposite Ricky Gervais in sitcoms, and performing at the Royal Shakespeare Company to appearing on Celebrity Big Brother, playing a long-running role in Coronation Street and headlining in panto.

When he looks back on his work, even he is taken aback by its sheer variety. “Sometimes when I get a theatre programme, and I look at my CV, I think, ‘Have I really done all that?’ I’ve always tried to do something where I think, ‘Oh, right. Well, that’s a challenge. I’d better have a go at it.’

Les embarked on his career in the early 1970s stand 1970s, initially performing stand-up comedy in working for men’s clubs. An early TV role saw him starring in the BBC’s The Laughter Show, alongside fellow comedian Dustin Gee, who died suddenly in 1986. It was shortly afterward that Les began his 15-year run as host of Family Fortunes.

“I started off at the tail end of variety,” he recalls of his early career. “I worked with Ken Dodd and Jimmy Tarbuck. But that world doesn’t exist anymore, so I’ve had to diversify, and I’m glad about that. I’m pleased that those risks have paid off.

“What I sometimes call myself is a jack of all trades, master of some. I used to say master of none. But then I thought, ‘Hang on a minute. You’ve actually done well at some things.'” Despite this accomplished career, surely there are still some unfulfilled ambitions.

“I’ve still got Shakespeare to tick off,” he says. “I did a season of Restoration comedy and tragedy at the RSC just before the pandemic and that was incredible. I got a taste for it. I’d love to play one of the clowns in Shakespeare. I don’t take myself seriously enough to think I could play Lear, but maybe the Fool.”

In the meantime, he’s more than happy to continue portraying Grandad.

“I’m only playing him until January 7, when I’m off to do another play. Sadly, I can’t tell you what it is yet, but I’m looking forward to a nice meaty role. That said, I will always be delighted to come back and sit in Grandad’s chair.”

In which case he might face some stiff competition for the role.

“There might well be a queue lining up to play Grandad,” he admits. “I might have to lock myself to the chair. But with all the chocolate biscuits Grandad eats during the show, I’ll be stuck anyway!”