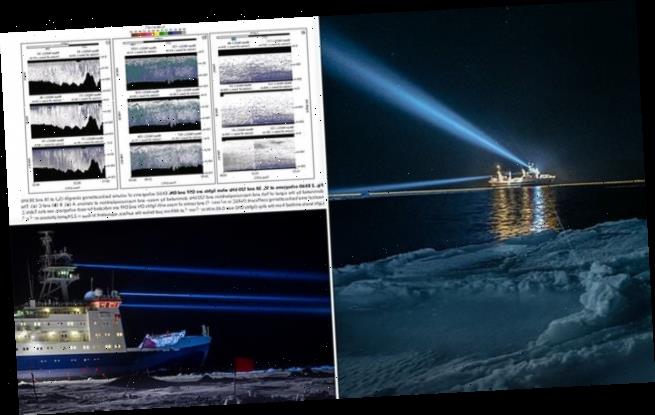 Light pollution caused by the bright beams from ships is playing havoc with Arctic marine animals by masking natural light from the moon, stars and aurora borealis

Light pollution caused by the bright beams from ships is playing havoc with Arctic marine animals by masking natural light from the moon, stars and aurora borealis.

Studying the impact of light on marine life during the Arctic’s long polar night, experts found that ships can disturb marine life up to depths of 650 feet.

Fish and the tiny zooplankton they feed on normally rely on subtle changes in natural light to guide their behaviour, but this is overwhelmed by artificial light.

The findings are relevant to vessels undertaking biological research or assessments of commercial fish stock, which could be influenced by the light pollution. 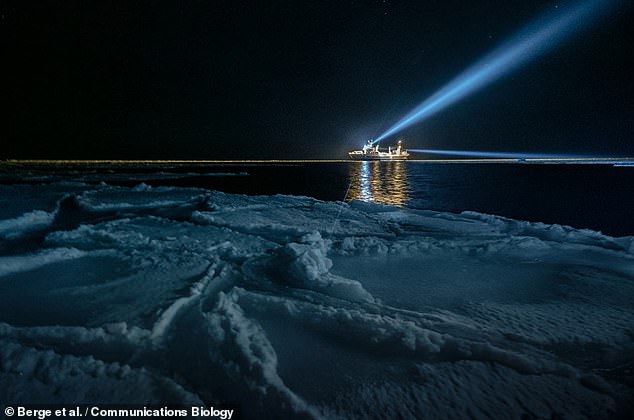 Light pollution caused by the bright beams from ships is playing havoc with Arctic marine animals by masking natural light from the moon, stars and aurora borealis

The research was undertaken by biologist Jorgen Berge of the Arctic University of Norway, in Tromsø, and colleagues.

‘For organisms that remain active in one of the last undisturbed dark environments on the planet — the Arctic Polar Night — the moon, stars and aurora borealis may provide important cues to guide distribution and behaviours,’ he said.

The polar night occurs when the Sun never fully rises above the horizon.

‘With a changing climate and increased human activities in the Arctic, such natural light sources will in many places be masked by the much stronger illumination from artificial light,’ Professor Berge said.

The phenomenon has added to the survival problems already faced by seals, sea otters, whales and the prey they depend upon.

‘Arctic marine life, down to 200 metres (656 feet) below the surface, is disturbed by artificial light from ships,’ added Professor Berge.

The findings suggest that the light from ships is affecting population surveys during the weeks-long polar night, which may in turn be impacting sustainable management schemes to protect against climate change and other hazards.

Fish and the tiny zooplankton that they eat rely on natural light to adjust their behaviour and migration patterns — and follow subtle, natural changes in night-time light during the polar night.

However, the team found that artificial light can both disorient them and disrupt their ecosystems — although the exact effects of this impact remain poorly understood. 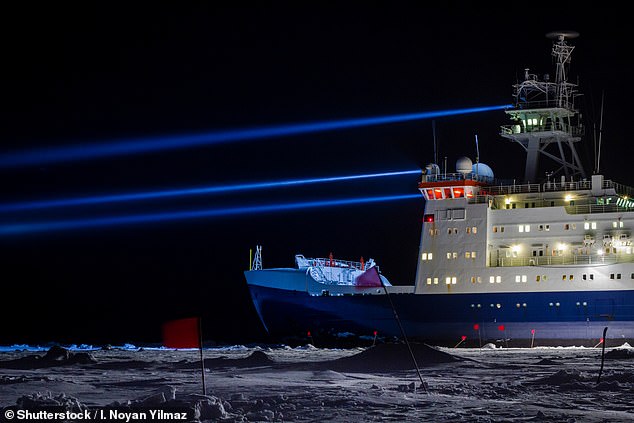 Studying the impact of light on marine life during the Arctic’s long polar night, experts found that ships can disturb marine life up to depths of 650 feet

Professor Berge’s team analysed how fish and zooplankton communities responded when exposed to artificial light during the polar night at three Arctic locations.

When a ship’s lights were turned on, their behaviour changed within five seconds — with creatures up to depths of 200 metres below the surface changing both their vertical positions and how they swam.

The team found that the impact differed at all three sites — with the most dramatic effect seen in the northernmost area, where the night sky is darkest.

The findings should be taken into account when conducting future scientific investigations during the polar night, the researchers said.

‘Normal working light from a ship may disrupt fish and zooplankton […] across an area of 125 square metres (410 square feet) around the ship,’ added Professor Berge.

‘We conclude that biological surveys in the dark from illuminated ships may introduce biases on biological sampling, bioacoustic surveys and possibly stock assessments of commercial and non-commercial species.’

Fish and the tiny zooplankton they feed on normally rely on subtle changes in natural light to guide their behaviour, but this is overwhelmed by artificial light. Pictured, echograms of the Arctic seas show how marine life is altered by the presence of artificial light

Animals, including humans, have evolved to grow accustomed to the rhythms of the natural light–dark cycle of day and night.

Artificial light at night is known to be harmful to our health — increasing the risk of obesity, depression, sleep disorders, diabetes, cancer, heart disease and other illnesses — but can now be found in almost every ecosystem.

Experts believe that it is having negative effects on many creatures including amphibians, birds, mammals, insects and plants.

Previous research had shown that light pollution can penetrate under the water, altering the habitats of fish living in shallow reefs near urban environments.

Light disrupts the normal cues associated with circadian rhythms, which guide the timing of migrations, reproduction and feeding.

Artificial light at night can make it easier for predators to find smaller fish prey and can affect breeding in reef fish.

The researcher’s findings show that it is having even more far-reaching consequences than was previously thought.

‘Artificial illumination at night is increasing annually by six per cent on average, thus becoming one of the fastest-spreading environmental challenges of the Age of Man, said Professor Berge.

‘Lights from cities, coastlines, roads and marine infrastructures are visible from outer space. The study of environmental impacts of artificial light has been a rapidly growing field in recent years.’

‘Artificial light will require special consideration for the sustainable management of Arctic and sub-Arctic regions.’

The full findings of the study were published in the journal Communications Biology.

WHAT IS LIGHT POLLUTION?

Light pollution, also known as photopollution, is the presence of anthropogenic light in the night environment.

With more than nine million streetlamps and 27 million offices, factories, warehouses and homes in the UK, the quantity of light we cast into the sky is vast.

While some light escapes into space, the rest is scattered by molecules in the atmosphere making it difficult to see the stars against the night sky. What you see instead is ‘Skyglow’.

The increasing number of people living on earth and the corresponding increase in inappropriate and unshielded outdoor lighting has resulted in light pollution—a brightening night sky that has obliterated the stars for much of the world’s population.

Most people must travel far from home, away from the glow of artificial lighting, to experience the awe-inspiring expanse of the Milky Way as our ancestors once knew it.

Light pollution is excessive and inappropriate artificial light. While some light escapes into space, the rest is scattered by molecules in the atmosphere making it difficult to see the stars against the night sky. What you see instead is ‘Skyglow’

The negative effects of the loss of this inspirational natural resource might seem intangible.

But a growing body of evidence links the brightening night sky directly to measurable negative impacts on human health and immune function, on adverse behavioural changes in insect and animal populations, and on a decrease of both ambient quality and safety in our nighttime environment.

Astronomers were among the first to record the negative impacts of wasted lighting on scientific research, but for all of us, the adverse economic and environmental impacts of wasted energy are apparent in everything from the monthly electric bill to global warming.