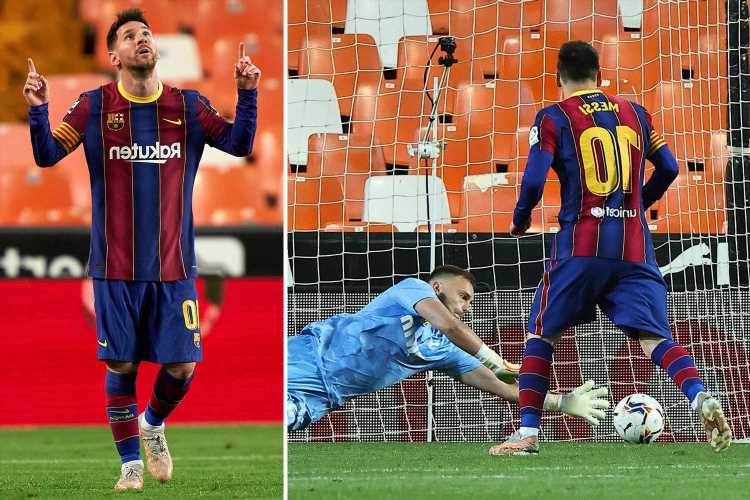 LIONEL MESSI missed a penalty but bagged a double as Barcelona beat Valencia 3-2 to keep alive the most exciting LaLiga title race in years.

Former Arsenal defender Gabriel Paulista put the hosts ahead early in the second-half. 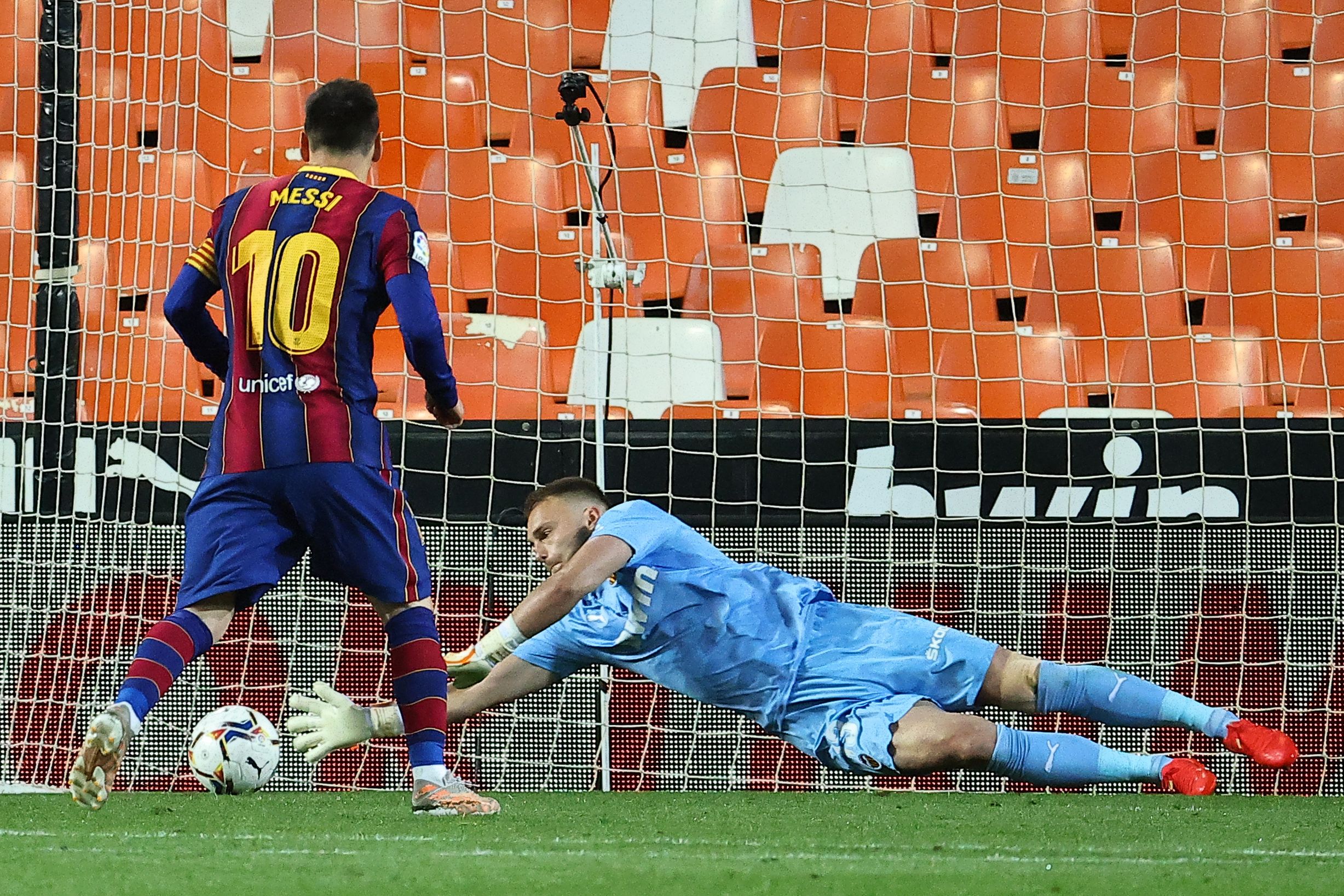 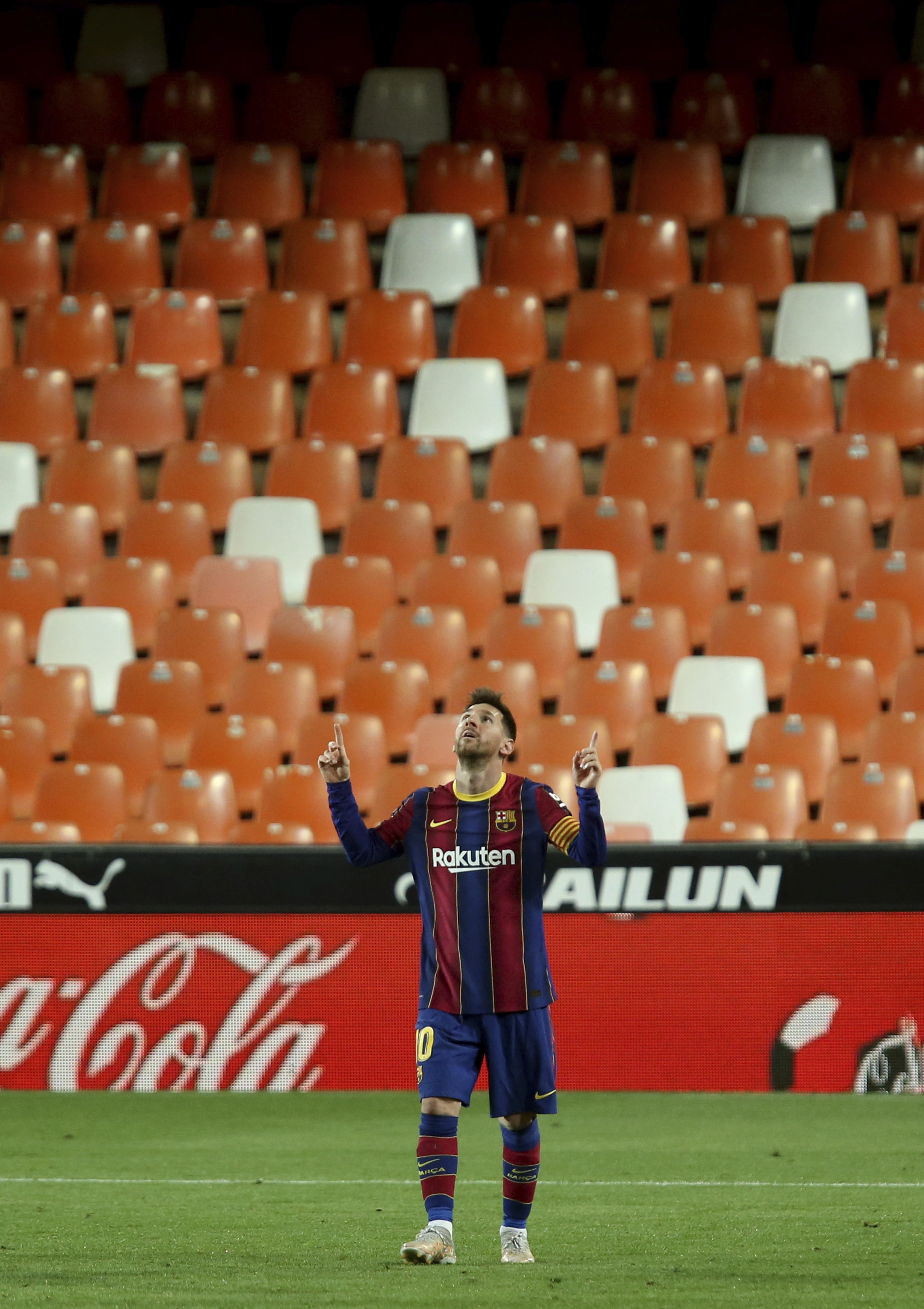 But Messi scored either side of an Antoine Griezmann goal to turn the game on its head.

Carlos Soler's superb late strike set up a tense finale, but Valencia could not find an equaliser and Barcelona kept the pressure on league leaders Atletico Madrid ahead of the showdown between the two teams at the Nou Camp next weekend.

After a shock home defeat to Granada in midweek, Ronald Koeman's side knew they had to pick up the three points at the Mestalla.

Despite Valencia's lowly league position – they now sit 14th – they came into the match unbeaten in eight matches at home.

Koeman, who was sent off during the Granada defeat and began a two-match touchline ban at the Mestalla, made four changes to his team.

Ronald Araujo and Clement Lenglet replaced Oscar Mingueza and Samuel Umtiti in defence, while Sergino Dest and 18-year-old Pedri were recalled in midfield at the expense of Sergi Roberto and Ilaix Moriba.

Jasper Cillessen then made a fine close range save to deny Araujo before the hosts threatened for the first time. A swift counter-attack caught Barcelona out and Goncalo Guedes teed up Jose Gaya, who clipped his effort just wide.

Messi went close with a free-kick from the edge of the box just before half-time as Barcelona finished the goalless first half on the up.

Momentum swung the other way after the restart as Marc-Andre ter Stegen had to block a Guedes shot with his feet before Valencia then took the lead after 50 minutes.

Ter Stegen made a mess of coming to claim a corner and Gabriel headed the ball into an empty net.

Thierry Correia could have added a quick-fire second goal, but the right-back blazed his shot high and wide with only the goalkeeper to beat.

It proved a costly miss as the visitors scored three times in 12 minutes to take control of the match.

Messi levelled things up after 57 minutes, turning the ball home following a scramble inside the box after old team-mate Cillessen had saved his penalty. 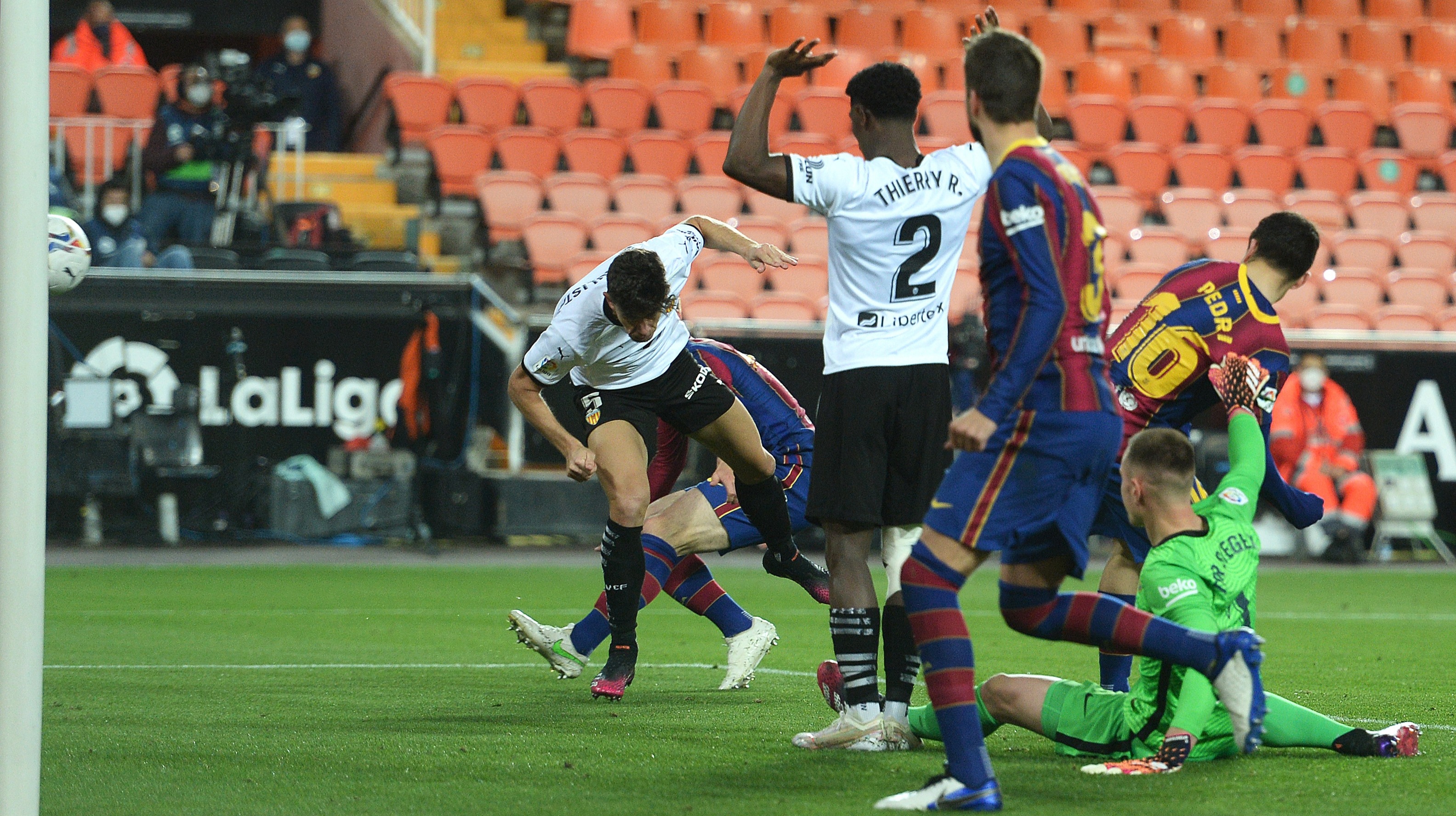 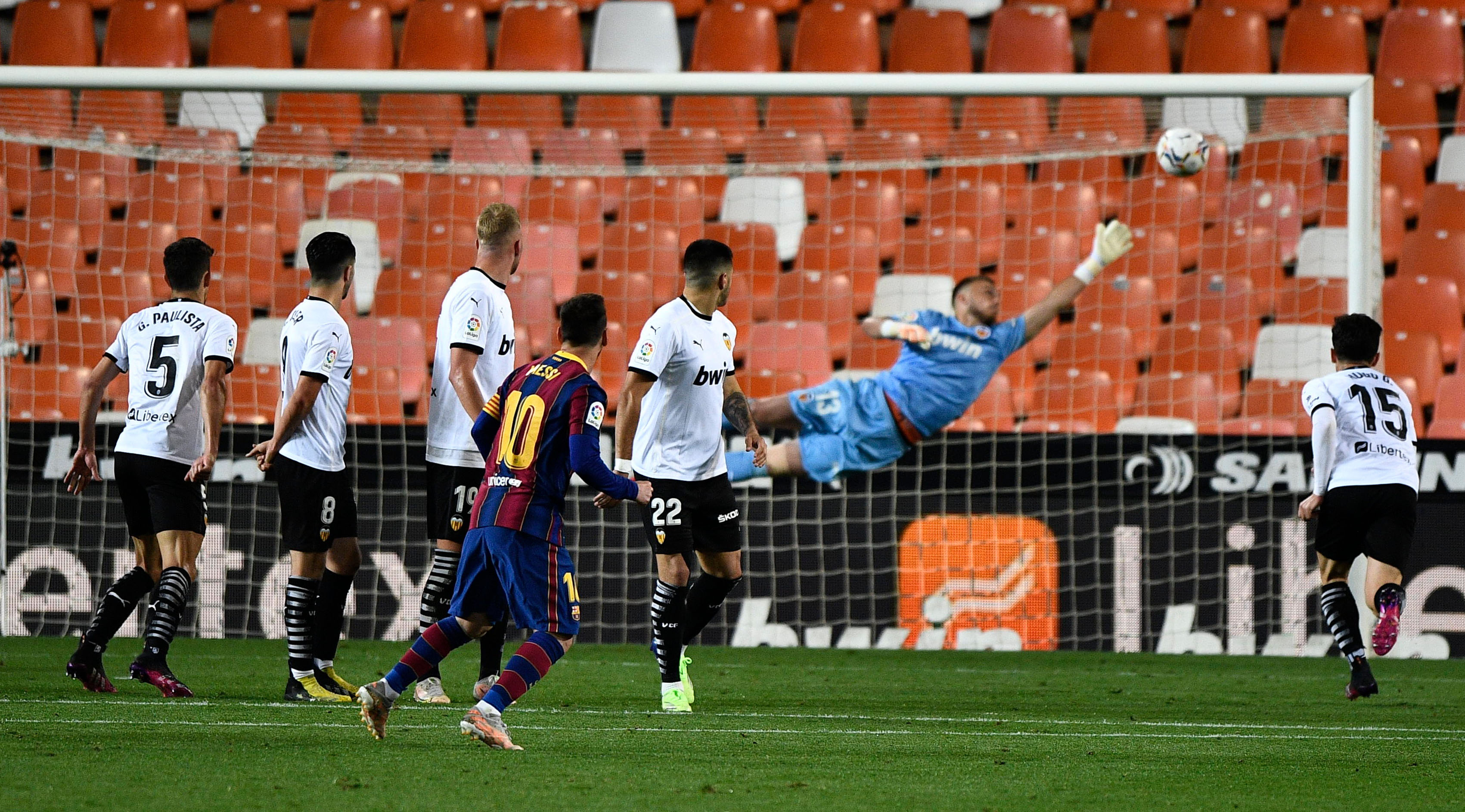 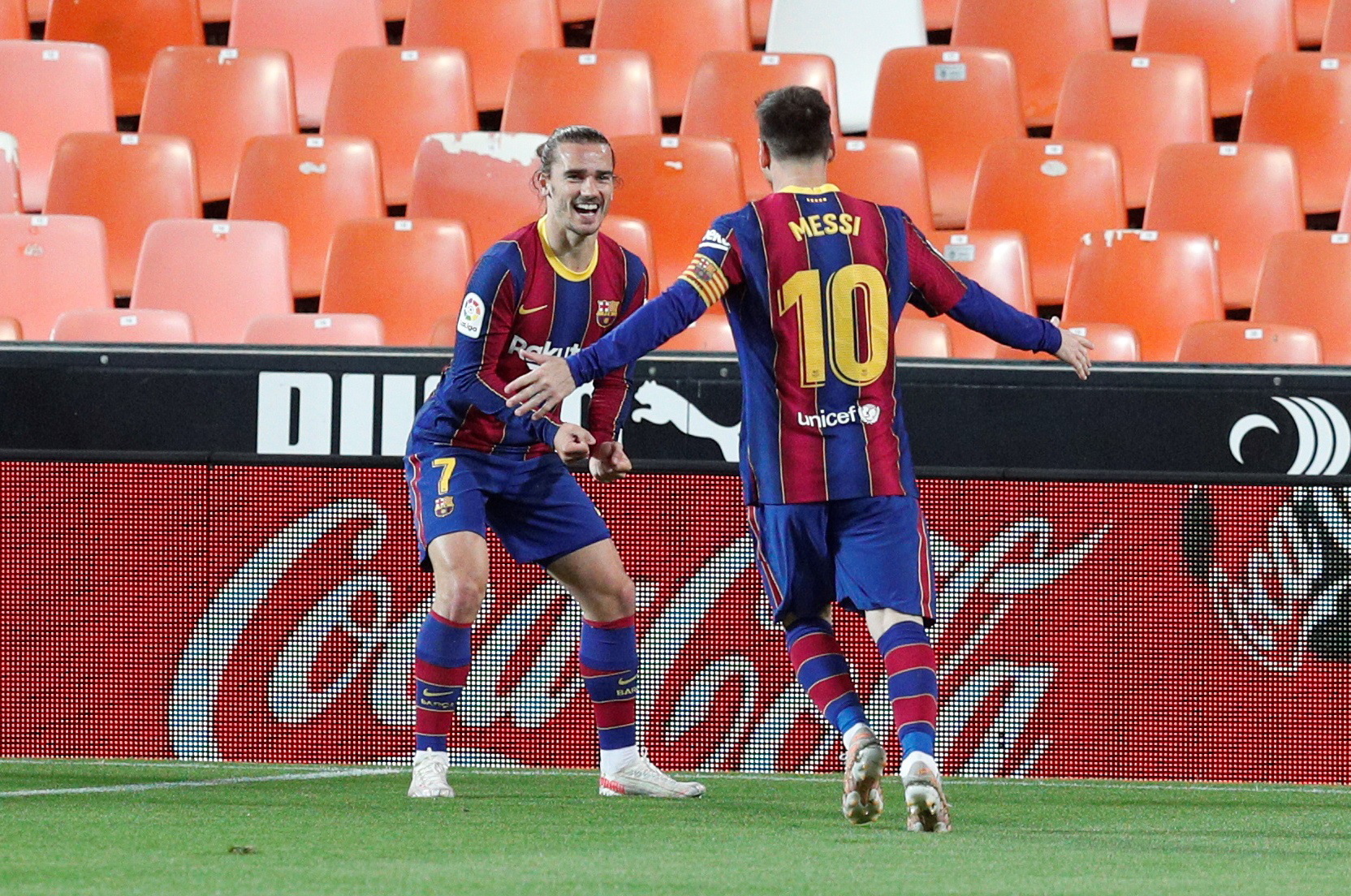 Cillessen was again hard done by when Griezmann reacted quicker than the Valencia defenders to poke the ball home after the keeper had made another great save to keep out De Jong's low header.

Messi netted a free-kick in the 69th minute as the Catalan giants looked to be coasting.

However, it was a nervy finish to the game for Koeman's men after Soler's superb 35-yard strike found the top left corner of the net in the 83rd minute.

But Valencia were unable to find an equaliser and Barcelona returned to winning ways.

They stay third in the table, level on points with Real Madrid and two points behind table-topping Atletico.

Holidays abroad 'should be discouraged' until late August due to threat of third wave, MPs warn