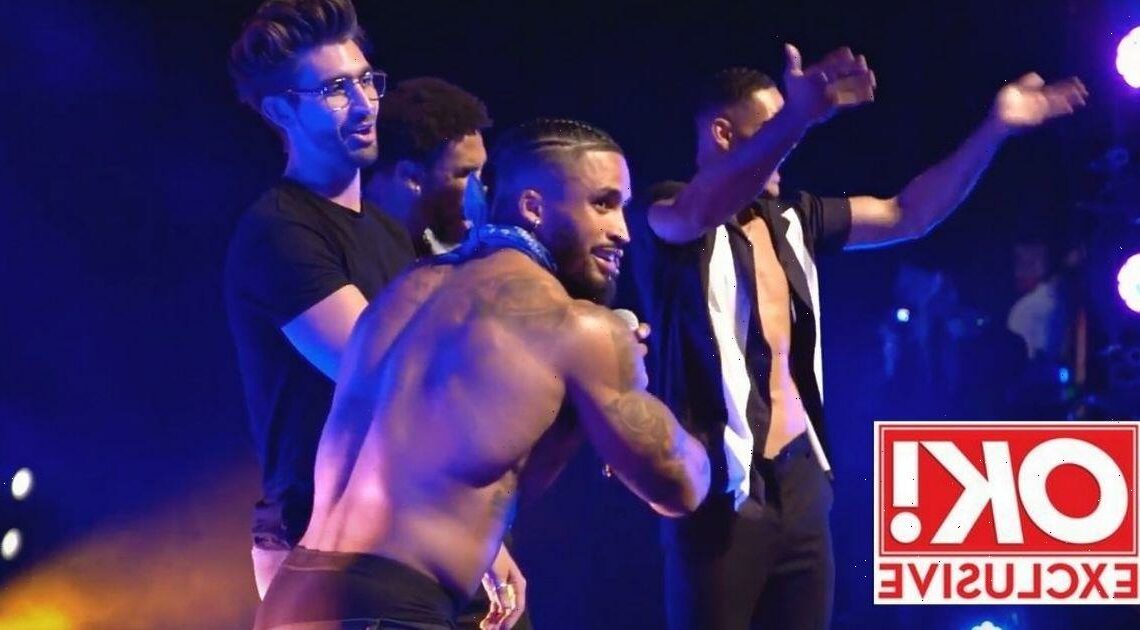 Michael Griffiths invited pals Christopher Taylor, Danny Williams and Jordan Hames on-stage during his special appearance at a Dreamboys show in Liverpool – and fans went wild as the trio got their kit off.

Michael, 29, is currently touring with the male entertainment troupe and was performing in his hometown on Sunday, August 29.

The former Love Island contestant joked with fans in the audience, saying "this is my house", referring to the Liverpool Empire Theatre, before pointing out his three best friends were sitting in the audience.

Chris, 31, Danny, 24, and Jordan, 26, had all come up to support Michael as he made his Dreamboys stripping debut, but they were taken by surprise when the lights were turned on them and they were invited up on-stage. In the video, exclusively obtained by OK!, former fireman Michael can be heard telling the boys to get up on stage, calling them "p***ies" for resisting.

Chris then got up and out of his seat rather quickly, and dashed towards the stage.

He was the first to offer to strip, throwing off his loafers within seconds and seductively swinging his t-shirt around his head to the roaring screams of the audience and thumping dance music.

The 2,000-strong crowd were hot under the collar after the hunk stripped down to his boxers, but they weren't prepared for what was next.

Jordan was up next, and though seemingly reluctant, he got fully naked for the audience.

The star took off his bottoms, before whipping off his t-shirt and grinding his crotch against it, and took even the Dreamboys themselves by surprise as he took off his boxers at the end.

With only his hands to cover his modesty, Jordan waddled off before Danny took his turn.

The model was the shyest of the three, only taking off his shirt for a split second, before bending over and giving fans a cheeky peek at his boxers.

After their hilarious strip teases were over, Michael emceed the 'competition', making the audience decide exactly who was deserving of the crown.

Despite Chris receiving a very loud reaction from the audience, it was Jordan who was announced the guest stripping champion of the evening.

Michael, who has been a guest Dreamboy since late 2019, had his plans to tour with the company put on-hold when the pandemic hit.

The Liverpudlian was finally able to put his new skills to good use as he took to the stage alongside the other hunks, performing a series of raunchy routines which had fans head-over-heels for his moves.

After the show – which saw Michael give a lapdance to a lucky audience member – fans queued for around two hours for a selfie with the star, with him happily posing for endless snaps.

Despite their earlier enthusiasm, Chris, Danny and Jordan didn't stick around for pictures with fans and sat away from them as they waited for Michael to finish up.

For more juicy gossip on your favourite stars, sign up to our daily newsletter here.

Seeing letters as colours: What it's like to live with synaesthesia

With 'Free Guy' and 'Jungle Cruise,' Disney Is Winning Both Sides of the Debate Over Hybrid Film Releases
Recent Posts