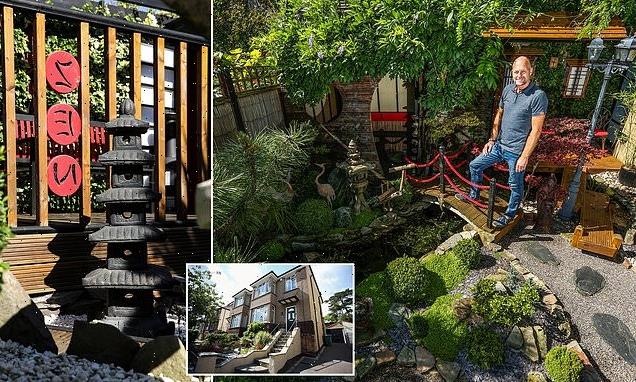 Man spends 13 YEARS creating an incredible Japanese garden in the backyard of his terraced home, spending over £8,000 on a zen garden, tea house, and more

A man has spent 13 years transforming his barren backyard at his terraced city home into an incredible Japanese garden.

Martin Fitton, 54, from Brislington in Bristol, fell in love with Japanese gardens after first visiting one on holiday in Dorset back in 2009 and immediately set about creating his own at home.

Over the past 13 years, he’s tirelessly renovated his garden by himself and now has an oasis which looks like it’s been plucked straight from Tokyo. In the last five years, he has invested some £8,000 into the space.

He’s built his own traditional teahouse, complete with koi pond, added concrete lanterns and pagodas and loves to have a cup of tea on the pavilion with his wife Cyndie, 54. 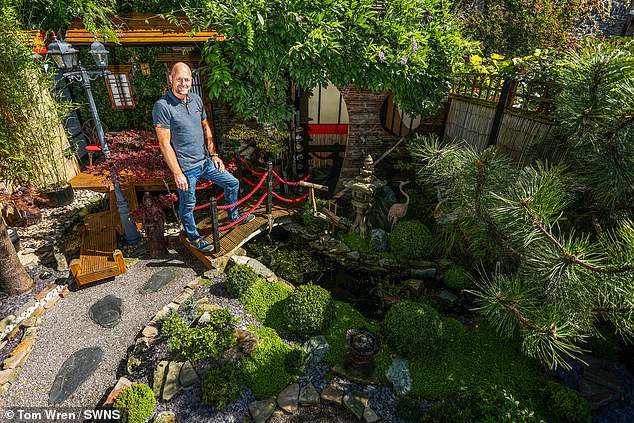 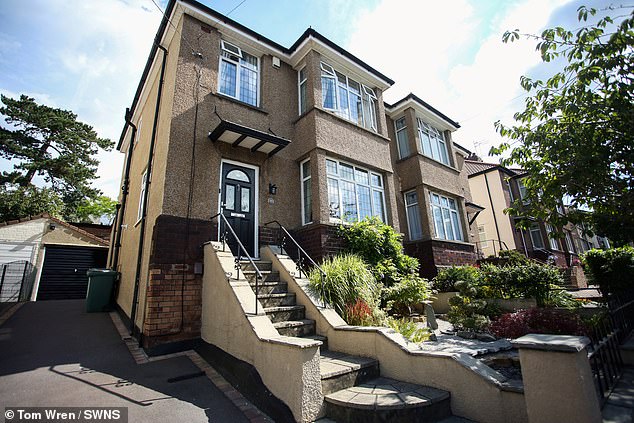 The lavish Japanese garden marks a dramatic contrast from the front of Martin’s terraced house, appears rather ordinary 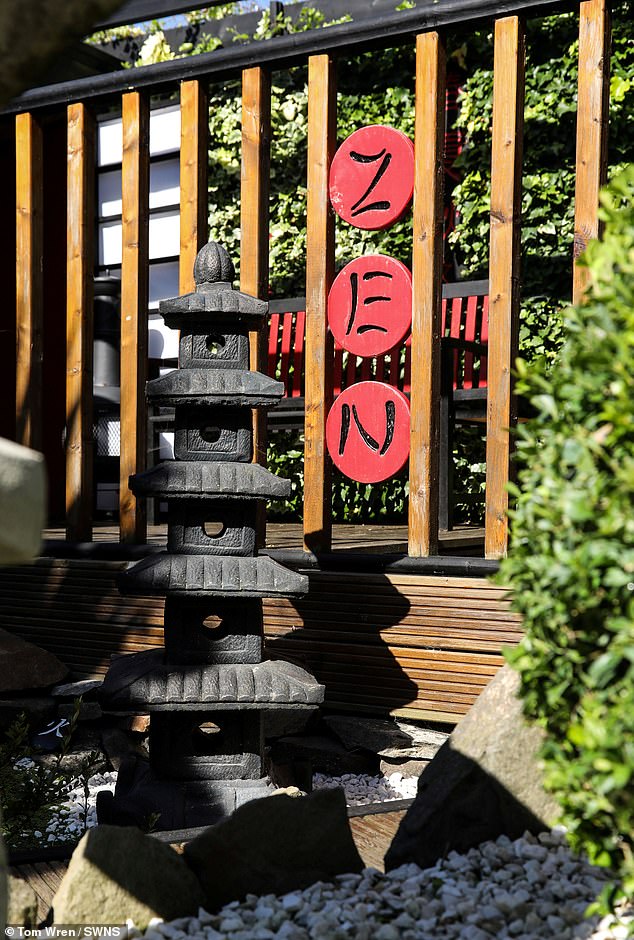 Among the special features in the tranquil oasis are statues, greenery, a traditional tea house and a koi pond

His garden has gained him a lot of fans, including plenty from Japan who have complimented the father-of-two’s dedication to tradition.

Tanker driver Martin, who lives with ward clerk Cyndie, said: ‘I am very proud of my garden.

‘It’s been very rewarding. I don’t have any help with the garden, I do it all myself, so it’s nice being able to see how it’s all come together.

‘I like it all but I recently renewed the top part of my zen garden so that’s probably my favourite part now. 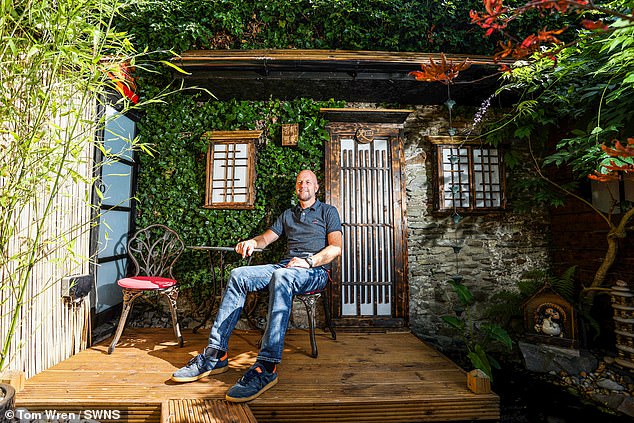 Martin, pictured here relaxing in his backyard, first fell in love with Japanese gardens after visiting one on holiday in Dorset in 2009 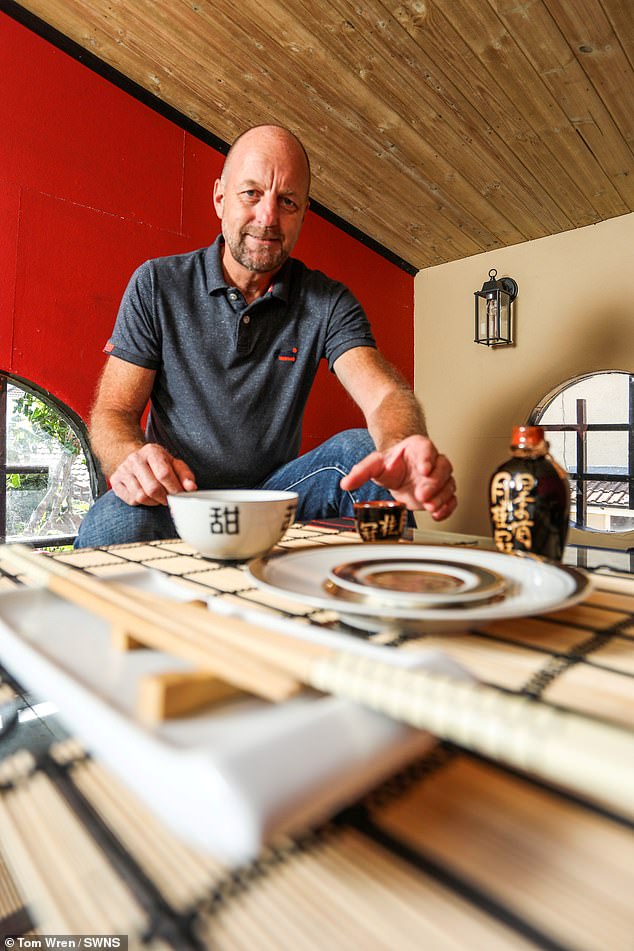 Since then, he has spent thousands of pounds and many years tirelessly creating his own Japanese garden 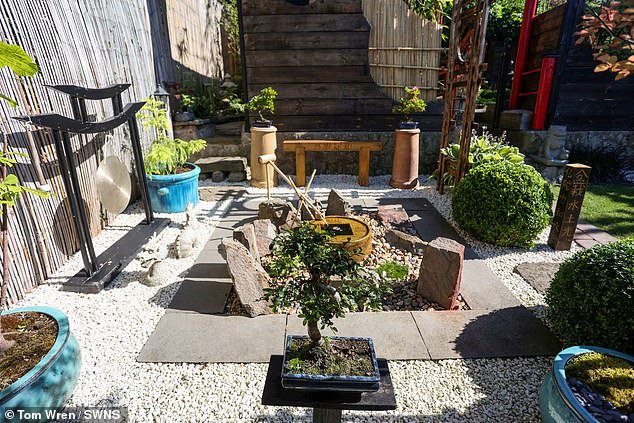 He renovated the space entirely by himself, and says he is proud of the garden he has created and enjoys 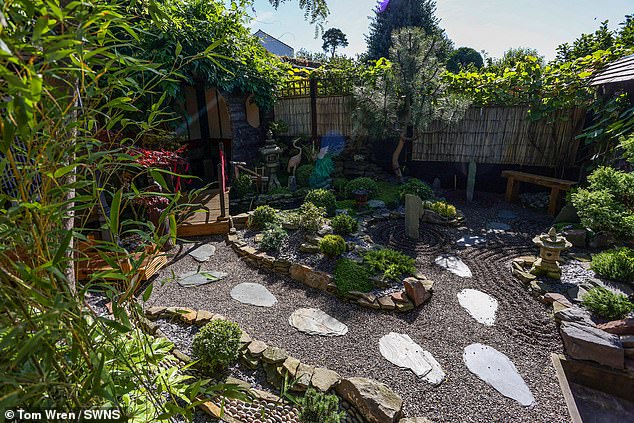 According to Martin, his garden has been complimented by Japanese people, which he says was important to him, as he didn’t want to offend anyone by ‘doing it wrong’

‘I like to sit on the pavilion with a cup of tea or a beer with my wife and look over the garden, it feels very peaceful.

‘I’ve had Japanese people compliment the garden which is really nice because I didn’t want to offend the Japanese by doing it wrong so I like that they have approved of it.’

When Martin initially moved into his home in Bristol in 2001, his children, Rhys and Vanessa, were only children so he installed climbing frames and summer houses for them to enjoy.

He visited a Japanese garden for the first time in Compton Acres, Poole, whilst on holiday in Dorset in 2009 and fell in love with the serenity and calm. 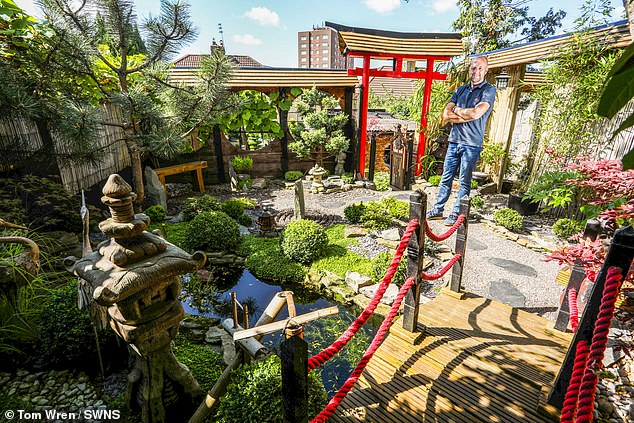 ‘Peaceful’: the keen gardener (pictured) says he enjoys having a beer or cup of tea in the garden, which he describes as peaceful and tranquil 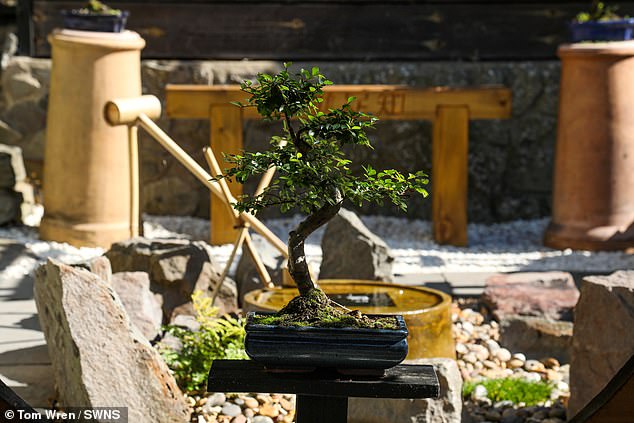 Among the authentic touches in the garden, including concrete lanterns and pagodas, is this Bonsai tree 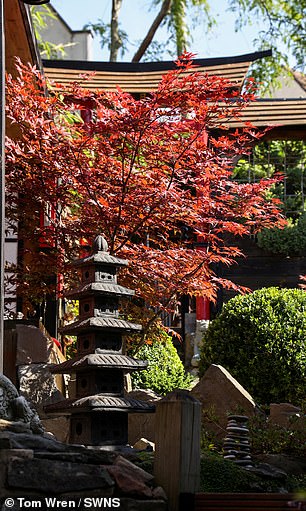 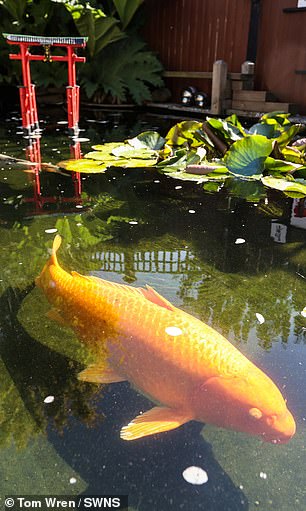 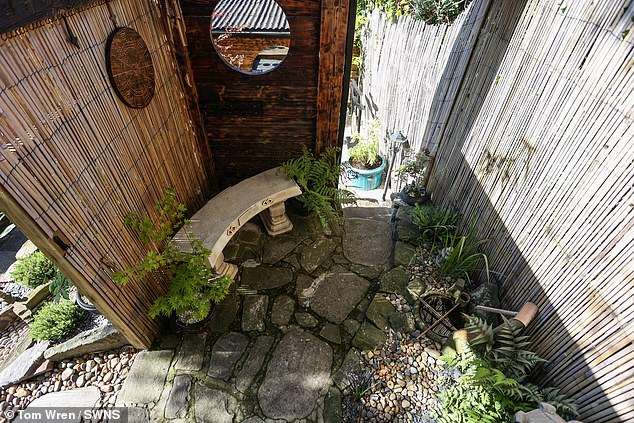 Among the different features, are different peaceful spaces to sit and enjoy a drink, or a moment of tranquility

He said: ‘I’d never been to a Japanese garden before then.

‘It felt so peaceful and quiet and calm, and I was looking around at it all and thought I could definitely do that myself.

‘I love being in the garden and I’ve always enjoyed working with wood so it was both things I was passionate about coming together.

‘My kids were teenagers by this point so weren’t really using the garden like they used to as children, so as soon as I get home, I started on transforming the old summer house into a tea house. 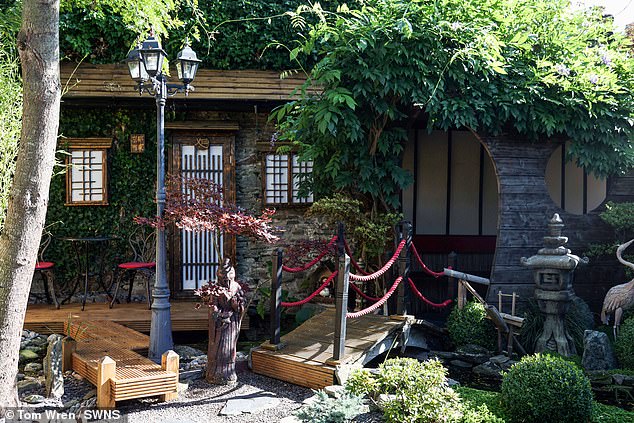 Martin moved into his house in 2001, and until 2009, his garden was an average backyard. Since then, he has transformed it into this Japanese oasis (pictured) 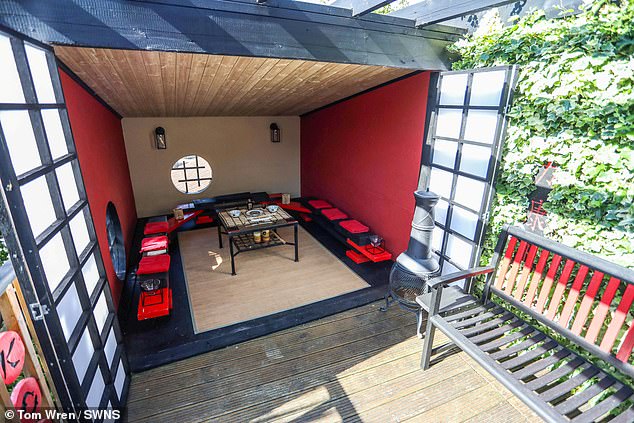 The tea house was the first feature that Martin built when he started the project, and it is the first thing you see when entering the garden 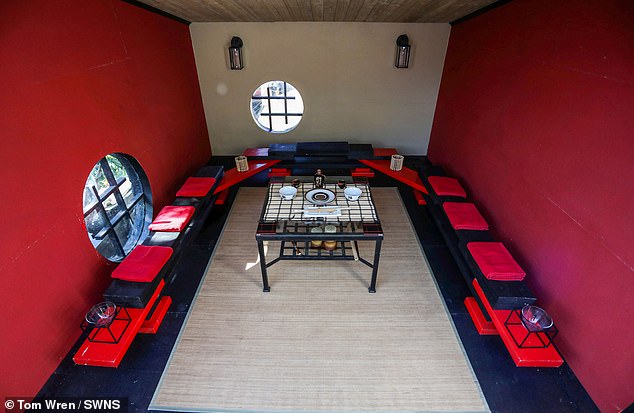 Martin tackled the garden by working on feature at a time, starting with the tea house (pictured) 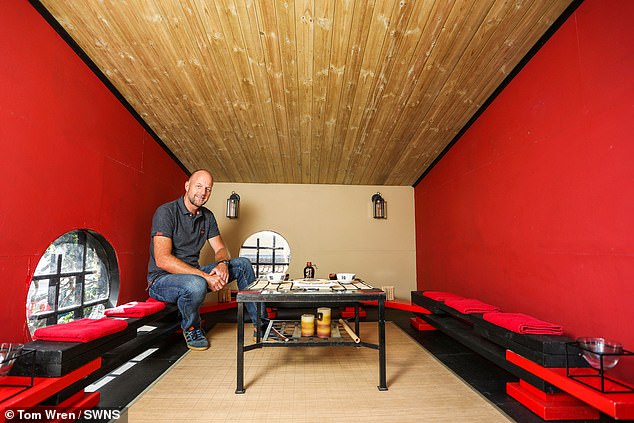 Over the next few years, Martin transformed his backyard, adding a zen garden, pavilion and Japanese trellis.

He built himself everything except the the courtyard and concrete lanterns, for which he had expert assistance.

He said: ‘I’ve done it all myself so it’s really rewarding.

‘I work different shifts to my wife, so when I’m home, I don’t just sit around watching TV, I get busy in the garden instead,’ he said.

The garden started to rot in 2016 so Martin got busy renewing the space the following year, ripping down each structure and rebuilding them. 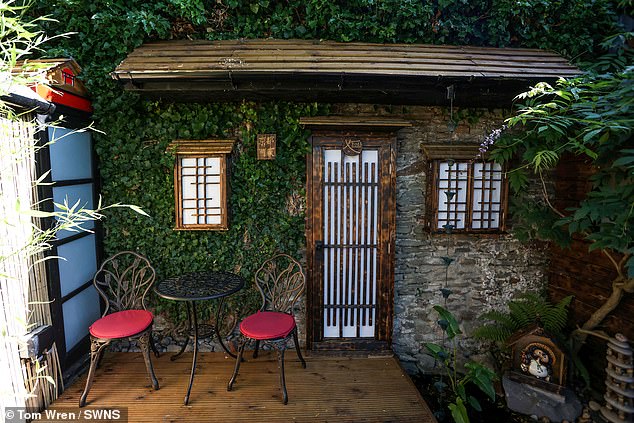 According to Martin, he enjoys both gardening and working with wood, so having the project to work on made the most of his skills 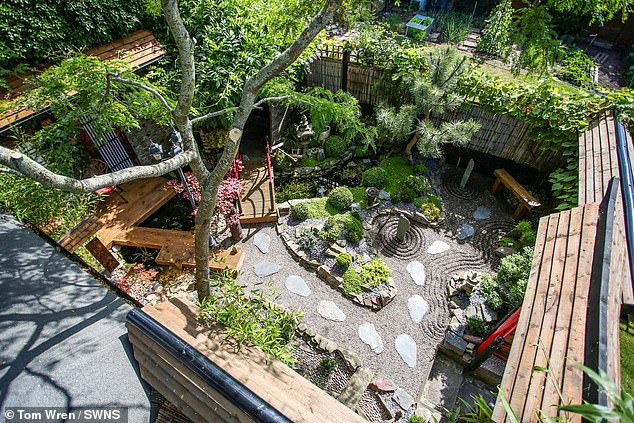 While the total cost of creating the garden is unknown, Martin estimates that he’s spent around £8,000 on the space over the last five years

He’s tackled each part of the garden one by one and estimates that he’s spent around £8,000 in the past five years on his renovation.

Martin said: ‘I really wanted to keep the garden traditional and true to Japanese culture so after visiting the garden in Cornwall, I started studying Japanese gardens properly.

‘I started with magazines as books as I didn’t really have internet to hand back then, but since the internet has become more available, I’ve looked online for more inspiration.

‘I really wanted to make sure that everything was Japanese and that I didn’t get it mixed up with Chinese so it was all true to the culture and not crossing over.

‘I’ve made Japanese friends as a result and often send them writing that I’ve found to make sure it translates correctly and to make sure it’s Japanese, not Chinese, as the writing looks so similar.’ 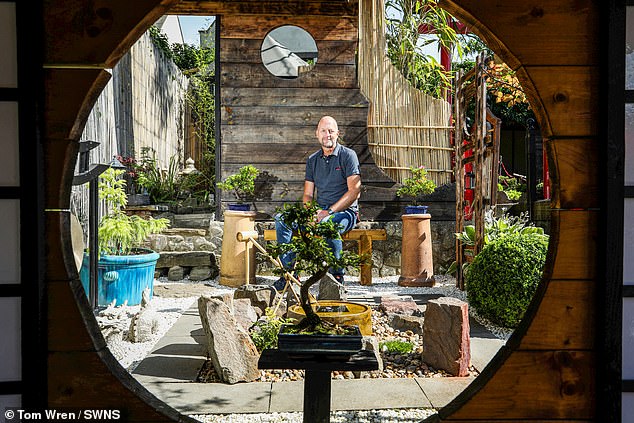 The gardener says that when he started the project, he didn’t have the internet to hand, so he started his research using books 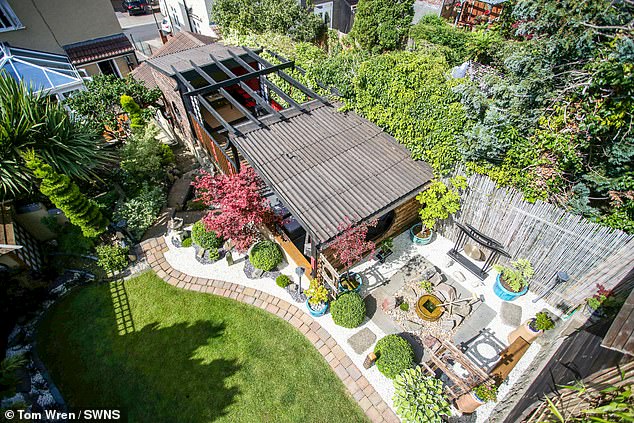 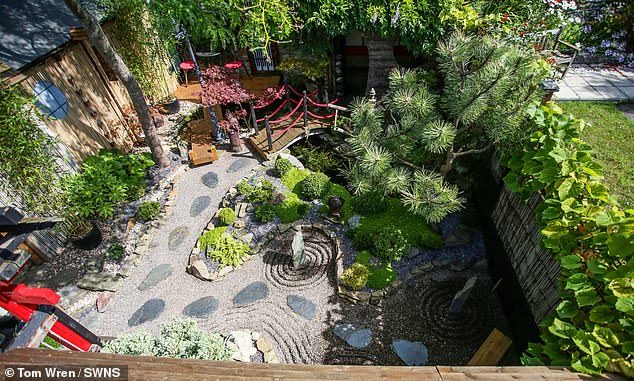 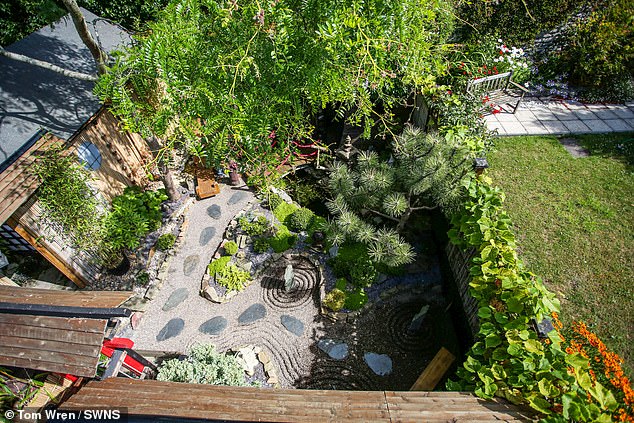 Bird’s eye view: According to Martin, the response to his Japanese garden has been ‘overwhelming’ 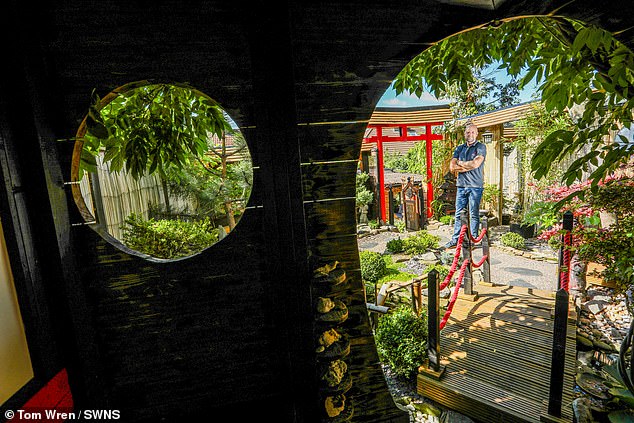 Despite his love for Japanese culture, Martin has not yet been able to visit the country, however he plans to do so for his 60th birthday in a few years

As well as delighting new friends online with his garden, Martin’s wife Cyndie and his children, Rhys, now 28, and Vanessa, now 26, also love the space he has created.

Despite his fascination with Japanese culture, Martin has never made it to the country but the couple plan to go for their joint 60th birthdays in four years time.

He said: ‘The kids have their own places now, but they both say the garden is amazing, they love it as well.

‘My wife thinks it’s fantastic and often sits with me on the pavilion to look at it.

‘The response to the garden has been overwhelming. I’m really pleased I decided to do it and I hope I’ve created the same peace and calm I felt when visiting my first Japanese garden for other people.’

Is it Migaloo? White whale washes up on remote Victorian beach