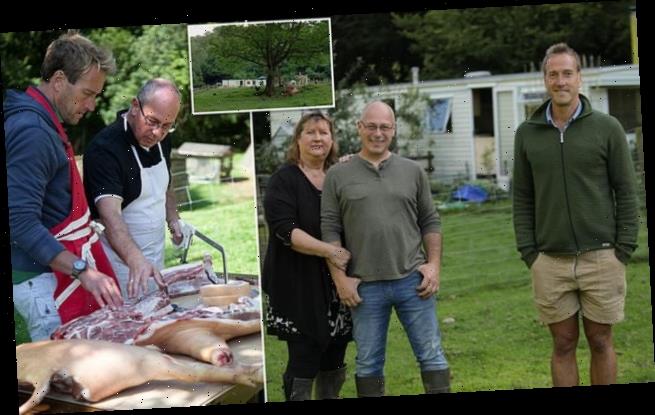 Downside of the Good Life: Lawyer who quit the City to start a Devon farm is still sharing a £3,000 caravan with his wife 20 YEARS on, has been on one holiday and admits they’re ‘trapped’ by the high-maintenance lifestyle

A couple who left their high-flying careers in London to start a holding in Devon admitted their life was ‘high maintenance,’ and that they hadn’t had a holiday in years.

Debbie, 53, and Simon Dawson, 56, appeared on Ben Fogle’s New Life in the Wild in 2015, where they introduced the presenter to their smallholding in Exmoor National Park.

When Ben visited in 2015, the couple were taking care of 138 rescue animals and spending £260 a month on utilities, hoping to soon get planning permission to build an eco-friendly house, but they’re still living in a £3,000 second-hand caravan.

Five years on, Ben returns to Exmoor for a new episode of the Channel 5 show, airing tonight at 9pm and finds that the house construction has been halted due to the pandemic, and that Simon and Debbie have had to sell many of their animals to cope financially.

Simon admits that he sometimes feels shackled by the high-maintenance lifestyle, but said he would never look back because it’s a ‘trap’ he’s chosen for himself. 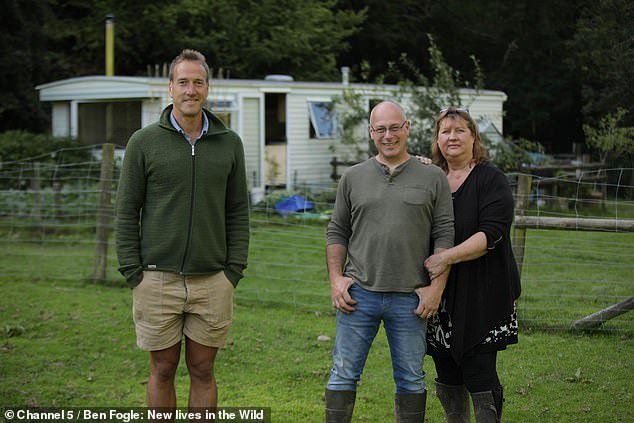 Ben Fogle returns to Exmoor National Park, where he first visited Simon and Debbie Dawson in 2015, for a new episode of New Lives in the Wild airing tonight at 9pm on Channel 5 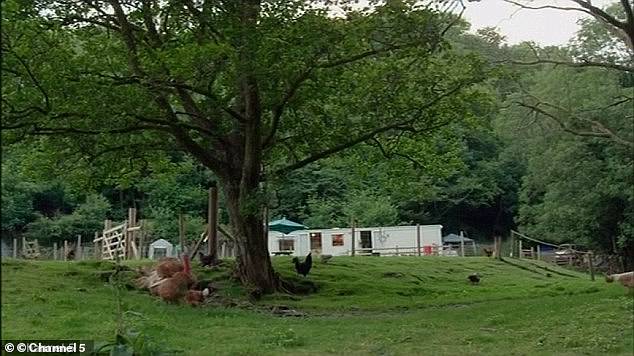 The couple sold their London flat and bought £50,000 worth of land in 2000 after growing disillusioned with the rat race. They had planned to build an eco-friendly house, but their plans were delayed due to the coronavirus and they still live in this caravan (pictured) five years on

When Ben asks Simon whether he sometimes feels trapped, Simon replies: ‘Kind of, but you’re trapped in a trap of your own making so I don’t feel like I’m caught in a rut.

‘I’ve created this. I’ve shaped and built my world and everything that we do. But we now can’t leave it. It’s not a cop out, it’s not an easy life,’ he adds.

‘It’s something that you have to constantly work at and there is a sense that we can’t go on holiday, we can’t go away from a weekend. We got to be there all the time,’ he says.

Simon tells Ben that the couple have only managed to go on holiday once in 15 years, to Greece. 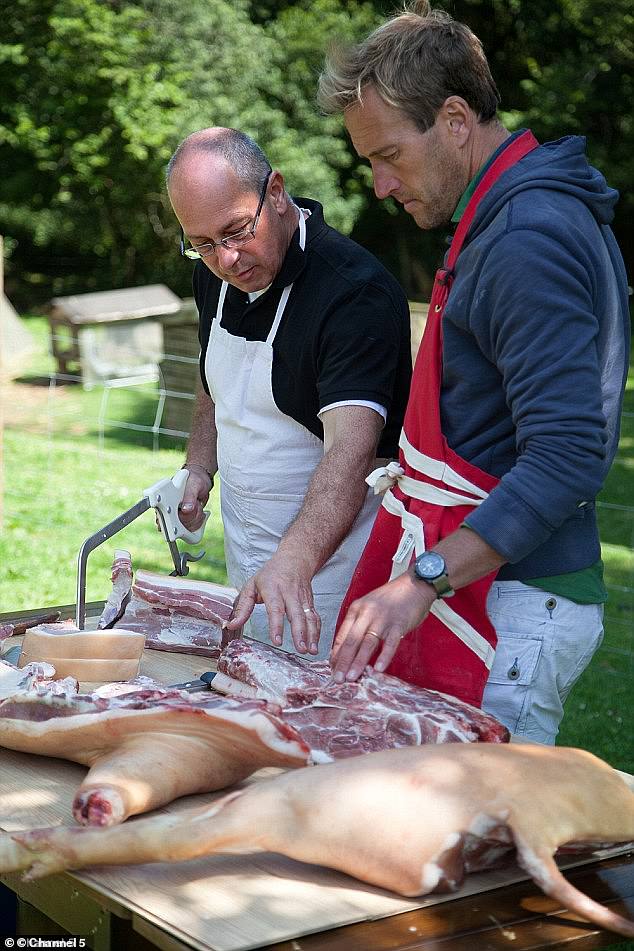 During his first visit, Ben learned more about Simon and Debbie’s self–sufficient lifestyle and even learned to cut pigs 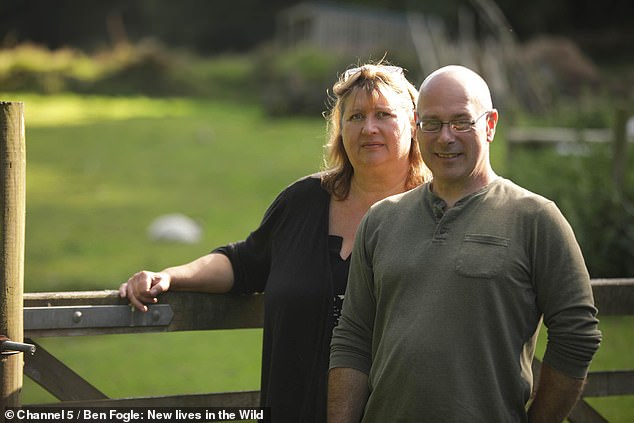 ‘It’s full on, we’ve got to be here,’ he says. ‘We can nip out and do a bit of shopping. But you always worry about getting back in time to feed the animals and make sure everything’s okay.

‘The commitment is really strong here and we have to be aware of it all of the time.

‘It’s a high maintenance lifestyle, and I wouldn’t change it for the world. But we are victims of the world we’ve chosen.’

Reflecting on Simon’s words, Ben says he thinks the price is worth paying, and says: ‘They don’t have anything more than the dream, what they are living now and the improvements they want to make. 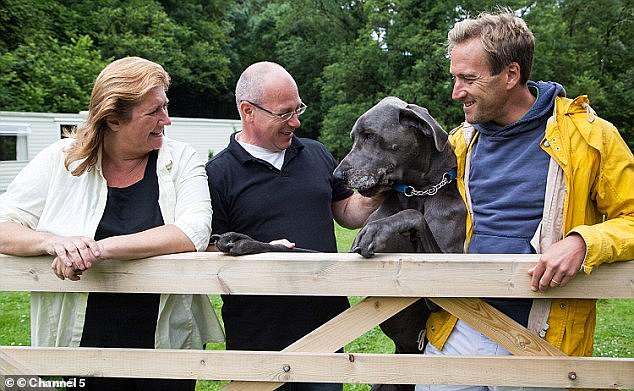 Debbie and Simon explained they worked hard on the farm. In tonight’s episode, Simon admits the couple have taken one holiday in 15 years

‘It makes me very proud to see their dedication, their resilience, their fortitude. They’ve written off a storm that some people would have harboured from much earlier.

Simon and Debbie decided to leave London after growing disillusioned with the rat race.

On New Year’s Eve 2000, the couple attended a party in Exmoor, which straddles the Somerset and North Devon border, and Debbie proposed the idea to Simon of giving up their lives to move to the country.

‘Of course the next morning when reality sets in, we thought “What are we going to do down here? There is nothing down here. What about our holidays? What about money?”.’ 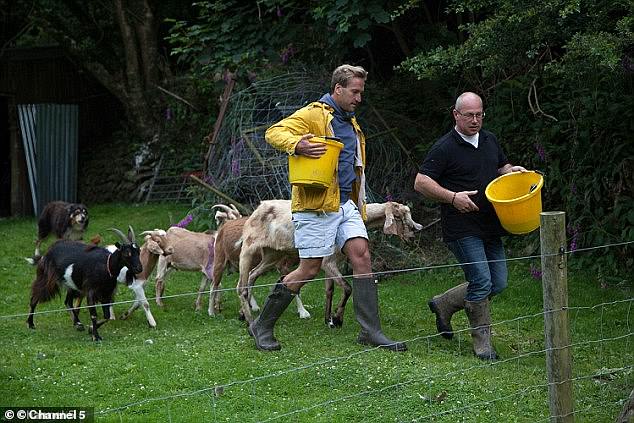 During his first visit, Ben helped the couple feed their 138 animals. On tonight’s episode, he learns that Simon and Debbie had to get rid of many of their lifestock to foot the coronavirus pandemic

Debbie rented a nearby cottage while she worked on the land, but Simon had to keep his job in the city to keep them afloat. But he was made redundant, and they faced losing everything they had dreamt of.

However, instead of giving up, the couple worked out ways of being super economical, and they still use a lot of these ideas today.

Living off just £5 a day, they would instead offer to trade their produce – from pork to chicken eggs – for what they needed, like petrol and other food products. Plus they would barter with tradesmen to train them in skills they needed for their farm work.

They harvest rainwater from the roof and heating is supplied by a log burner, fueled by the 10 acres of surrounding woodland.

They haven’t ompletely shunned the modern world, though. An electricity generator runs the TV, and they have satellite channels and a broadband connection.

They often forage for food in the woods, and eat the animals bred for food on their land. During his visit, Debbie teaches Ben how to make nettle beer.

Their biggest expense is feed for the animals, costing £260 when the farm was at is busiest.

To cover costs, they breed ‘extreme free range’ pigs, selling the meat online as well as locally, with each pig making them £500 in total. 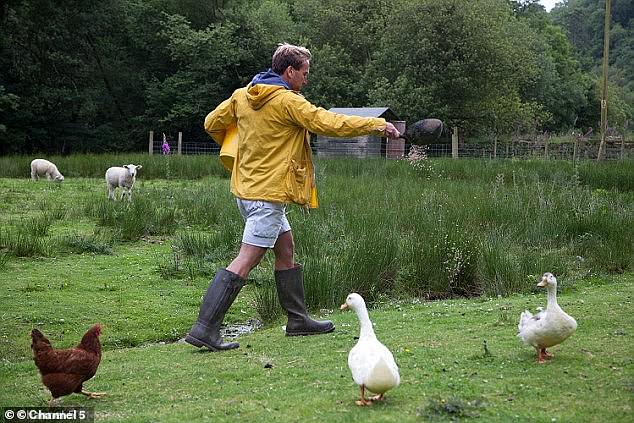 Ben was amazed by the couple’s small holding during his first visit. Tonight, he says he is impressed with how resilient Debbie and Simon have been

At its peak, they had 138 animals on the farm, from the pigs, to horses, to chickens, to goats, to dogs – some kept for friendship, others destined for the table.

Many are rescues, including Senorita, a pig who lived in a council house and watched day time TV.

‘If it needs a home, we have space, so we’ll try to put it up,’ said Simon

The couple don’t see their families often with Simon admitting his relatives aren’t really interested, and Debbie saying her sister has visited once after 15 years and ‘was surprised at how much she liked it.’