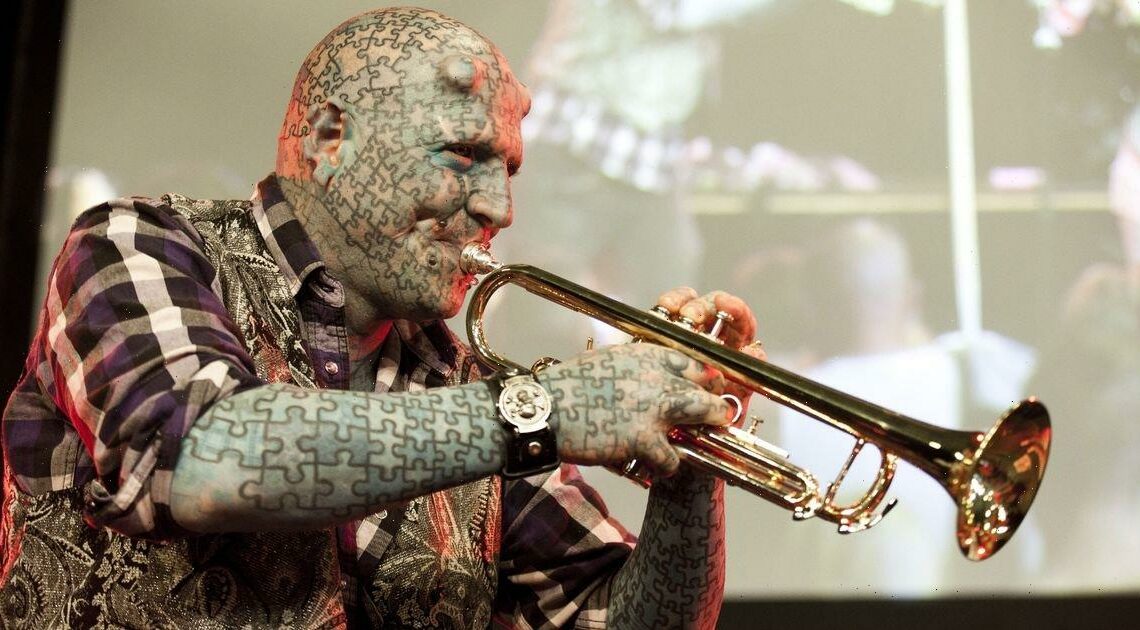 Man with jigsaw tattooed all over himself looks unrecognisable before ink

A man who set the record for the most jigsaw-puzzle pieces tattooed on the body looks completely different before ink.

The Enigma – AKA Paul Lawrence – is an artist, actor and sideshow performer from the USA whose body is covered in tatts.

On April 13 2011 he’d set the record with a staggering 2,123 tattoos, which took three hours for officials to count.

Paul's transformation into The Enigma began on December 20th 1992, with his first tattoos being done by Katzen the Tiger Lady, another extreme body modifier who he would later marry and divorce.

Since then he has been tattooed by over 200 different artists and has had as many as 23 tattoos done at once.

The majority of the puzzle pieces have been done in blue ink but the whites of his eyes have been tattooed jet black, which is an extremely risky procedure.

He also has a variety of body modifications, including five flesh tunnels around his mouth, two subdermal, horn-shaped implants in his head and heavily modified ears that now resemble the edge of a puzzle piece.

But in one photo that can be found on the internet, he looks completely different without his tattoos and body mods.

He can be seen with short strawberry blonde hair, regular eyes that haven't been tattooed and no ink on his face.

In 1991 The Enigma got his start as a member of the Jim Rose Circus, with which he performed around the world, touring with acts such as Nine Inch Nails, Korn, Godsmack and once opening for David Bowie.

He also toured with Katzen playing music and performing sideshows under the name 'Human Marvels'. After leaving the Jim Rose Circus he performed at various events and shows, including the Edinburgh Fringe Festival and the US leg of rock band Nine Inch Nails' Self Destruct Tour in 1994.

He has proven that he likes to live dangerously, as some of his performances involved tricks using power tools, fire, electricity and blades.

One stunt he is particularly known for is when he holds an apple in his mouth while someone bites it from the other side, both blindfolded, while they cut it with chainsaw.

He performed this dangerous trick back in Italy in 2011 when he was on the set of Lo Show dei Record.

It was here that he was presented with his official Guinness World Records certificate.

To stay up to date with all the latest news, make sure you sign up for one of our free newsletters here.

The Enigma has also had a number of mainstream media appearances on TV shows such as The X-Files, Penn & Teller: Bulls***!, the movie Firecracker and Billy Talent's music video for Fallen Leaves.

He believes that there is no limitation to what a person can do when choosing tattoos, especially when it comes to colour.

The body mod fanatic said: "You can be every colour you want to be. Just pick one and go for it."